So you think you know World at War by now?  There’s one essential ingredient you need to know how to use in order to bring it all together.  Helicopters!

A helo’s mode is denoted by which side of the counter is displayed.
You’ll notice that the hovering helicopter can use its AP firepower while a helicopter in flying mode cannot do so.  Also, the fact that flying around makes it harder to hit stuff is reflected in the higher “to hit” number for the helo’s HE firepower in the lower left corner.  You’ll notice that the flying mode HE is underlined, which indicates that the Cobra is capable of moving fire (as all attack helos are capable of doing).  There is no FP minus or “to hit” penalty for moving fire for the helos.  What you see on the counter in terms of FP and “to hit” is what you get.
Helicopters can change modes ONCE during their activation and it must be the first thing they do.  You cannot move a flying helicopter all over the place and then throw it in hover mode in the same activation.
Flying, Moving and Firing
Let’s talk about flying helicopters first.
When helicopters first enter the map, they are always flying.  Flying helicopters can move an unlimited amount of hexes anywhere they want on the map IF they are not shooting.  Yes, you need to actually show the movement path to your opponent so that opportunity fire can be conducted against them if they enter an enemy unit’s range.  If you want to conduct fire with a flying helicopter it can only move a maximum of 12 hexes.
Here’s an example: 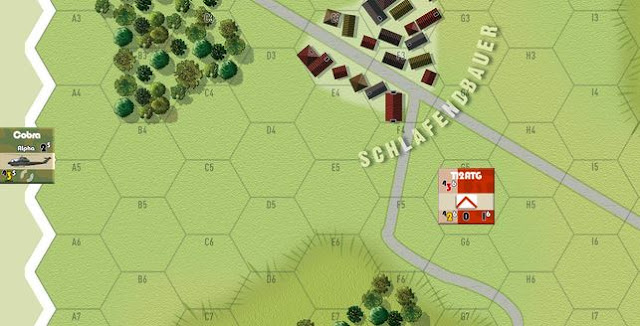 In the above example, we have a Cobra helo from Alpha company. Alpha has just had its formation drawn through a chit pull.  The US player wants the Cobra to come in and fire at the T12 ATG in hex G5.
First off, the Cobra is going to need to enter the board flying so we make sure that the flying side of the helo counter is face up. 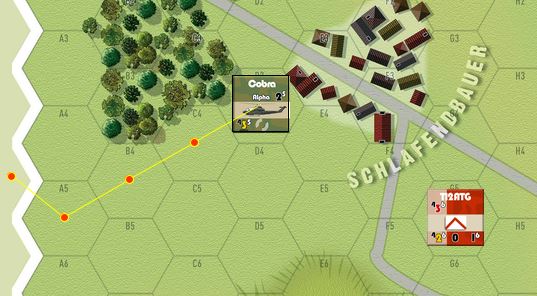 The Cobra comes on in flying mode and it can move up to 12 spaces.  We could just move the Cobra right adjacent to the T12 ATG and get a close range bonus for the HE fire “to hit” number but this would result in opportunity fire against the Cobra (yes, I know it looks like the T12 can shoot at the Cobra in D3 anyways but trust me, it can’t.  We’ll get to that later).
So the US player moves the Cobra over to D3 and opens up on the T12 ATG with its HE firepower.  We roll 3 dice for a “to hit” of 5 or higher.  The results are 4/1/6.  The Cobra scores one hit on the T12 ATG.  The T12 is a soft target in clear terrain and gets no defensive die so it is automatically disrupted. 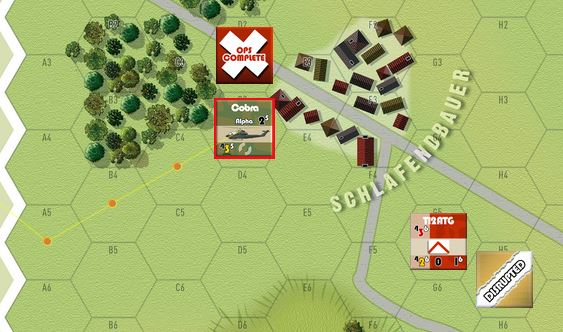 The Cobra is marked Ops Complete.  As with all moving fire, you cannot move, fire, and then keep on moving.  Once you fire, that’s it for the unit’s activation.
Switching Modes and Hovering
As stated above, a helicopter can switch modes only once per activation and it must be the FIRST thing that it does.
Let’s say in the example above that Alpha gets activated twice in a row through a lucky chit pull.  The Cobra spots a T-80 platoon in the distance and it’s within range.  So the player now switches the Cobra from flying mode to hover mode as its first action and then fires at the T-80 platoon. 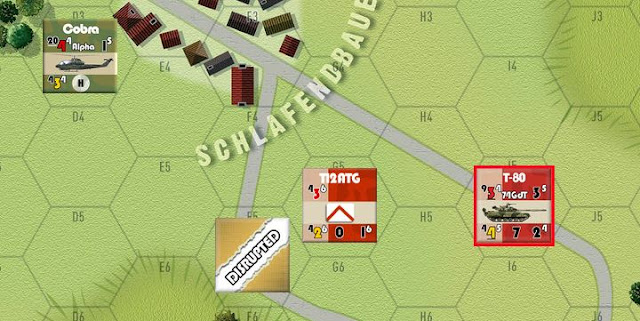 The Cobra switches to hover mode and now we suddenly have our AP firepower.  The T-80 platoon is well within range of the Cobra’s 20 hex AP range.  We roll 4 six-sided die and hope for a “to hit” of 4 or higher.  The result is 6/3/2/4.  The Cobra scores two hits on the T-80 platoon.  The T-80 platoon now rolls defensive dice (3 dice for 5 or higher) and gets 5/6/1.  Both Cobra hits are negated.  The Cobra is marked Ops Complete.
So far, I think this is pretty straightforward.  However, things get a bit more complicated with Line of Sight for helos.  Let’s take a look.
Helicopters and Line of Sight
To understand helicopters and their line of sight, you first have to understand how their altitude works.  Altitude is considered in terms of “levels” in World at War.  There are three levels, in order of height.  Helicopters are considered as basically flying just above whatever terrain is below them.
Level 1:  Helicopter is flying over more of less flat ground:  clear terrain/crops/rough/etc.
Level 2:  Helicopter is flying over elevated terrain (hills, woods hexes on ground level, city)
Level 3:  Only when helo is flying over wooded hill or city hill hex.
Depending on which level the helo is flying, its LOS varies.  Since all LOS is reciprocal, this also means the height can affect which units have LOS to the helo.
Level One flight LOS:
For helos at Level one, simply treat their LOS the same as if it were a regular ground unit sitting on the edge of a hill.  This means it can fire at :
They cannot fire at:
The black lines indicate to which units the helo has LOS (and vice versa) and the white lines represent the units to which the helo has no LOS (and vice versa).
Level Two Flight LOS
LOS for helos at level two are a bit different. The main difference between level one and two flight is that helos can:

Level Three Flight LOS
Helos at this level have almost the same LOS as helos at level two.  A helo in level three flight can:

Helo LOS is always a bit hard to figure out so forgive any mistakes.  My best advice is just to go slow when starting to use them and check the LOS chart on the reference table.
Helicopters and Combat
We’ve already gone over helos moving and firing, switching to hover mode and firing their AP.   A couple more things need to be mentioned.
Helicopters are hard to hit due to their speed and relatively small size.  As a result, there are penalties for shooting at helicopters.
First off, ground units that have an underlined firepower can never attack a flying helicopter.   They can attack hovering helos.
Secondly,  all ground units except anti-aircraft units (AAA units and SAMs) which are indicated by their blue firepower rating on their counter, have their ranges halved when shooting at helicopters.  Non-anti-aircraft units cannot use extended range when targeting helicopters.

Here we have a Hind helo hovering in hex O13.  Let’s see what each unit is rolling to hit the Hind:
ITV: (hex S14)
ITVs cannot fire at flying helicopters due to their underlined range of 20.  However, because the Hind is hovering, the ITV can fire at it.  The ITV’s range is halved from 20 hexes to 10 hexes but that’s okay because the Hind is only 4 hexes away.  The ITV rolls 4 dice for 4+ to hit.
Chaparral (hex S16)
The Chaparral is an anti-aircraft unit (as denoted by its blue firepower rating) so it receives no penalties for range.   It can fire at a helo regardless of whether it is hovering or flying.  Also, because this is a AAA unit with a non-underlined range, it does get close range bonuses (and can also fire at extended range if need be).  The Chaparral is only 5 hexes away from the Hind so it gets a close range bonus and is rolling 2 dice for 3+ to hit.
Abrams (hex U12)
The Abrams is a non-anti-aircraft unit with a non-underlined range.  It can always fire at helos whether they are flying or not as long as they are within range.  The AP range of the Abrams is 10, reduced to 5 because it is firing at a helo.  Range from T12 to the Hind in O13 is 5 hexes.  As a result, the Abrams rolls 4 six sided dice for a to hit of 4+.  On a side note:  non-AAA units never get close-range bonuses to hit helicopters so if the Abrams was only 2 hexes away from the Hind, it would still be rolling the same firepower/to hit (4 dice for 4+).
Abrams (hex Y15)
Just like the other Abrams, this unit’s range is halved from 10 to 5 hexes for firing at a helicopter.  The range from Y15 to the helo in U12 is 10 hexes.  This is considered extended range so the Abrams in this hex cannot fire at the Hind.
Helicopters and Pop-Up Attacks
Helos have a special attack known as a pop up attack.  This lets them hide behind a terrain feature, ascend quickly by one level and fire at enemy units before descending again behind the terrain feature.  This move is meant to avoid exposing the helo to enemy fire.
To conduct a pop up attack, the helo’s owner declares the attack beforehand and then considers the helicopter has moved up one level of flight (e.g. level one to two or two to three)
When the helo moves up, one (and only one) enemy unit that is in range and in good order and not ops complete can conduct opportunity fire.  Like an assault, the hits are determined and allocated after both sides roll the dice.
Here’s an example: 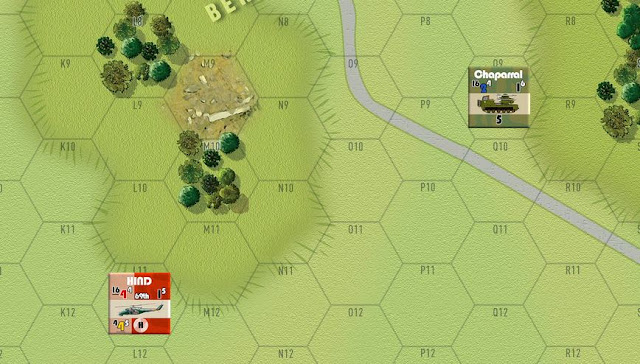 The Hind in L11 wants to conduct a pop up attack against the Chaparral in Q9.  Right now, the Hind is over clear terrain and at level one height.  It may not presently attack the Chaparral because at level one flight a helo “may not fire at an enemy unit on ground level if a hill hex (M11 and N10) is between the attacker’s hex and target hex”.  So the Hind is going to need to pop up from behind the hill to level two where there is no such LOS restriction.
The Soviet player declares pop up.  The Hind in hex L11 ascends to level two flight and the Chaparral SAM unit and the helo see each other.  The Chaparral conducts opportunity fire, rolling 2 six sided dice for 3+ to hit.  It rolls a 4 and a 6 and gets two hits.  The Hind rolls 1 dice for 5 to try and negate one hit.  The Hind rolls a 3.  No luck.  The two hits on the Hind stand.
But these hits are not allocated yet.
The Hind now gets to roll 4 dice for 4+ to hit.  It rolls 3/4/4/4.  3 hits.  The Chaparral rolls for its defensive armor, 1 six sided dice for 6 and gets a 5.  No luck.
Now the hits are allocated.
The Hind takes two hits and is destroyed (helos can only be disrupted and hit once before they are destroyed – they don’t get the disrupt – reduce – destroy cycle that most ground units get).
The Chaparral takes 3 hits and is disrupted, reduced, and destroyed.  A wreck marker is placed in hex L11 and another wreck marker is placed in Q9.
Conclusion:
I hope that helps explains helicopters a bit.  They’re pretty easy to use but the LOS can be a little tricky at times.  I’m not 100 per cent sure I got that section right but feel free to let me know if you see any mistakes.
Thanks again to Pascal for the article idea!