Sorry for my absence the last couple of weeks.  I’m in the middle of changing jobs and working on a grad thesis, which hasn’t left a lot of time for gaming.  In any case, let’s get back to some World at War goodness!  Thanks to a comment from Pascal, I’m going to do a short article on Assaults and Overruns, two very important aspects to the World at War system.

Assaults and Overruns occur when two enemy forces occupy the same hex.  This represents the dirty business of close-quarters no-holds-barred down in the mud combat.  The major difference between an assault and an overrun is that assaults occur when:

An overrun occurs (hopefully rarely) when:
An overrun basically represents the terror of vehicle units speeding into an infantry hex and running down guys, firing at point blank range, and using their impressive firepower to simply wipe out anything that does not have protective cover.
The procedure for assaults and overrun is very simple but there are a couple of mechanics to keep in mind.  First off,  combat results take effect after both sides get in a round of fighting.  So it really doesn’t matter who is entering the hex first in this case.
Secondly, defensive terrain does not modify the combat rolls – except in the one case when infantry and vehicles are fighting in a city hex.
Third, you cannot “aim” for a particular unit in a stack when you are in assault or overrun combat.  Hits are distributed equally among the units in the stacks.  So when you have two infantry units in a hex and they take two hits in an assault, the top-most infantry takes one hit and then the bottom infantry unit gets the second hit.  If there’s an odd number of hits to distribute then just roll a 1d6 and give the top unit the third hit on a roll of 1-3, the bottom unit gets the hit on a roll of 4-6.
Finally, after the assault is resolved, one side will be moving out of the assault hex.  If the defending unit takes the same or fewer number of hits than the attacker (the side that moved into the hex) then the defender wins and gets to stay in the hex.  The attacker must retreat back into the hex from which it came.  If the attacker gets more hits than the defender, the attacking unit stays in the hex it is assaulting and the defender must retreat one hex away in the exact path from which the assault came or else it is destroyed.

So in this case, the Abrams will be rolling 2 six-sided dice and a hit is achieved on a 4 or higher.

Let’s have a very basic example, shall we? 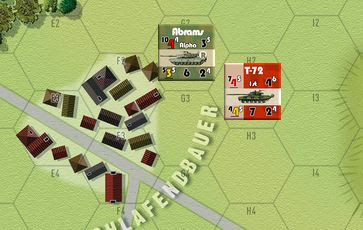 In the example above, the T-72 enters the hex in G2 with the Abrams.  Assault begins.
The T-72 rolls 2 six-sided die and gets a 4 and a 1.  The T-72 will score 1 hit on the Abrams.
But wait!  Before we assign the hit to the Abrams, it gets to fire back at the T-72.  The Abrams rolls its assault factor (2 dice for 4 or better) and gets a 6 and another 6.  The Abrams scores two hits on the T-72.  Now we can assign the hits.  The T-72 is disrupted and reduced while the Abrams is merely disrupted.
In this case, because the T-72 has taken more hits than the Abrams, it must retreat back into the hex from which it came (in this case, H2).  The Abrams stays in the G2 hex.  These results are shown below:
It is important to realize that the lack of an available retreat path (due to the path being either off the map, through enemy-occupied hexes, or in illegal terrain such as water or rivers) needs to be available or the retreating unit is destroyed.  Below we have an example where the lack of a legal retreat path destroys the retreating unit: 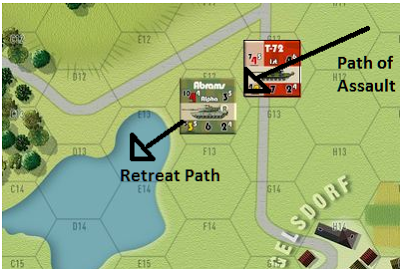 In the example above, the T-72 enters hex F12 and assaults the Abrams.  The T-72 scores one hit on the Abrams while the Abrams scores no hits on the T-72.  Normally, the Abrams would be able to take the hit and retreat back to another hex to fight another day.  However, the hex behind the path of the assault is a lake/water hex so the Abrams is actually destroyed.  A wreck marker is placed in hex F12 along with the victorious T-72 counter.

Note that if the assault had come from hex F11 to the north of the Abrams, it would have survived the assault and been moved into hex F13.

Do HQ bonuses affect assault?  The answer is – sometimes.  If a unit with an HQ is participating in an assault and does not begin the assault combat under an Ops Complete marker then the HQ bonus dice are added to the assault. 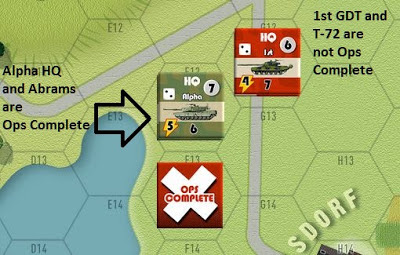 In the example above, the Alpha HQ and an Abrams are in hex F12 and they are Ops Complete.  Maybe they moved and/or fired earlier this turn or maybe they even used opportunity fire to shoot at the Soviets 1st HQ and T-72 approaching them in G12.  Either way, the American units are Ops Complete so when the Soviets enter hex F12 and the assault begins, they will not be able to use their HQ bonus.

On the other hand, the 1st Guards Tank Division and the T-72 in G12 jump are not under Ops Complete and they jump gleefully into hex F12 to scrap it up with the Americans in assault combat.  Because they are not Ops Complete, the HQ can add its bonus (two dice, as shown in the upper left corner of the Soviet HQ counter) to the assault.

The Abrams and the American HQ took more hits than the Soviets so they must retreat.  Without a viable retreat path, they are destroyed.

The Soviet T-72 is disrupted.  Since a unit with an HQ took a hit, we must roll for HQ reduction. We roll a six sided die and the HQ will be reduced on a roll of 1.  Luckily, for the Soviets, they get a “5” and the HQ is fine and dandy.

Units that are disrupted before an assault begins can still participate in combat but there are some penalties.  The number of dice on the assault factor stays the same but the to-hit number is raised to “6”.

The T-72 rolls two dice and gets a 1 and a 4 and scores one hit but this hit is not yet allocated.

Hits are now allocated.  The Abrams, already disrupted before the assault, is now reduced.  The T-72 is disrupted.  Since the T-72 was the attacker and it failed to score more hits than the Abrams, it must retreat into the hex from which it attacked so it is moved back to hex I12.

Note that HQ bonuses are still given to disrupted units that are not Ops Complete.  The number of dice added to the assault roll is the same as indicated by the HQ bonus but the “to hit” number will still remain a 6.  This is why it is always a good idea to keep HQs and disrupted units to the rear.  Remember that disrupted units can still move away from the enemy!  So rotate them to the back to avoid them giving the enemy an easy assault win.

Assaults in Cities vs Infantry

Infantry and vehicles conduct assaults in the same exact manner described above EXCEPT when the terrain in which the assault takes place is city/town terrain hexes.

Because infantry are awesome at using built up city hexes to hide in and vehicles are meant for open ground fighting rather than urban combat, this situation is represented in World at War with bonuses given to infantry when involved in urban combat against vehicles.

When infantry are involved in assault in a city hex (whether as attacker or defender) versus vehicles, the infantry gets a +1 bonus to the number of dice it rolls for the assault and a -1 bonus to the “to hit” roll.  The tanks/vehicles still get the same number of assault dice and “to hit” ratings.

Let’s look at an example: 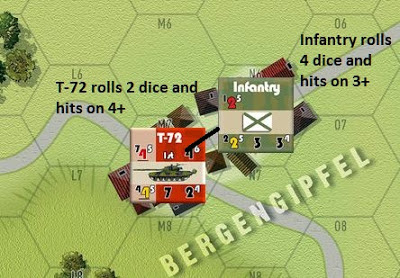 In the example above, the T-72 is assaulting into a city hex (N6).  The T-72 will roll its normal assault stats, which is 2 dice for hits on 4+.  Because the infantry are in a city hex, the infantry’s number of assault dice increases from 3 to 4 and the to hit is now lowered from 4 to 3.

Hits are now allocated.  The US infantry is disrupted and reduced.  The T-72 is eliminated and a wreck marker is placed in hex N6.  Because the US infantry scored more hits on the T-72, it remains in the city hex N6.

The lesson here is to never send your vehicles into a city hex with good order enemy infantry.  Try to soften them up first with your HE firepower or artillery.

If your opponent is silly enough to put infantry in the clear terrain within close distance of armored units, then you’re in luck!  You can use overrun to send your vehicles into a hex full of infantry (and infantry only) to conduct an overrun.  Vehicles get a considerable bonus when entering a hex full of enemy infantry.  The number of assault dice rolled for the vehicles is tripled although the “to hit” number remains the same. 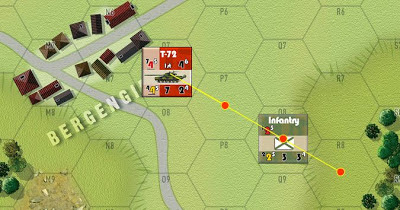 In the picture above, the T-72 in O7 wishes to conduct overrun on the US infantry in hex Q8.  First, we check if enough movement points are available for the overrun.  The T-72 has 7 movement points (as indicated by the number on the bottom center of its counter).  It moves to P7 expending one MP.  Now to enter hex Q8 with the infantry and conduct the overrun it must pay one MP for entering clear terrain and one MP for the overrun itself.  It must have enough MPs left after this to move out of the hex.  The hill behind the infantry in R8 will cost two MPs to enter.  In total, it will cost 5 MPs to conduct this overrun, which is less than the MPs for the T-72.  As a result, the T-72 is eligible to overrun the US infantry in Q8.  It moves to P7, takes some ineffective opportunity fire from the US infantry and enters the hex.

The assault factor for the T-72 is two dice, which is tripled to six dice!  The “to hit” remains the same at 4+.

The T-72 is disrupted and reduced.  The US infantry is disrupted, reduced, and eliminated.

Because the T-72 is disrupted in the attack, it cannot actually move into hex R8 as planned.  It must retreat back to the hex from which it attempted the overrun, so it is moved into P7.

If the T-72 had not been disrupted in the attack, it would have been allowed to move into the R8 hill hex behind the eliminated infantry.

Note that eliminated infantry are not replaced with wreck markers.

This shows why it’s always a good idea to keep your infantry in cover.  Put them in a city or at least a woods hex!

Note that, as in assault, disrupted units have their “to hit” number raised to 6.

I think that covers all the basics.  Please leave a message in the comments section if you see any mistakes or have any questions.