Recently, I’ve been covering the basics of World at War for all the new players jumping into the game.  Up until now, I’ve given some examples of play, talked about HQs and also given a short primer on Line of Sight (LOS).

So let’s get into the real meat of the game, which is all about crushing your enemies, seeing them driven before you and hearing the lamentations of their women.

First off, it’s essential to understand the counter layout for units in World at War, so let’s take a look. 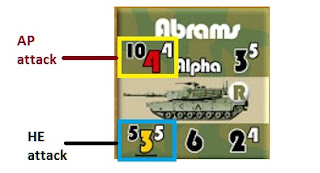 The set of numbers in the upper left and lower left corners of the counter represents the Armor Piercing (AP) attack rating and the High Explosive (HE) attack rating. The AP attack numbers are used when attacking hard targets, which are basically armored targets like tanks.  The HE attack rating is used when attacking soft targets, such as infantry.  You can tell whether a target is hard or soft by the picture on the counter.  If it’s an actual picture of a unit then it’s a hard target.  If it’s a NATO symbol (such as the X for infantry units), then it’s a soft targets.  In the example above, the Abrams tank is a hard target.

Anyway, when the Abrams attacks a hard target and uses its AP attack, there are three numbers to consider, the 10/4/4.  The “10” represents the range of the Abrams unit in hexes.  The Abrams can actually shoot up to twice this range but will incur some penalties, but I’ll discuss that later.

Let’s have an example, shall we?

The Abrams in the picture above is going to shoot at the T-72, which is six hexes out.  The T-72 counter has a picture of a tank on it so we know it’s a hard target.  Therefore, we are going to use our AP rating to fire at it with the Abrams.

The T-72 is well within the 10 hex range of the Abrams so there are no penalties to hit.  We roll four six sided dice and hope for results of 4 or better.

As I stated above, the “10” hex range can be exceeded by some units.  If the number for the range is NOT underlined, the unit can fire at extended range, up to twice the printed range.  In this case, the Abrams can fire up to 20 hexes.  However, the penalty for firing at such long range is a +1 for the “to hit” number.  This means the Abrams would be rolling 4 dice (same firepower number) but only results of a “5” or “6” would count as a hit.

In the example above, you can see that the range of “10” for the Abrams is not underlined, so therefore it is capable of extended range (it can fire up to 20 hexes with a small penalty).  The Soviet BRDM-AT, however, has its AP range of 14 underlined so it actually cannot fire beyond this range ever.

Let’s have an example with extended range combat:

The Abrams has scored a single hit on the T-72.  Good stuff.

When a unit attacks another unit that is half of its printed range or less, the “to hit” roll decreases by 1.  This means that the Abrams will get the “to hit” bonus at firing at units that are 5 hexes or closer to it.

Note that these range bonuses and penalties also apply for HE attacks. 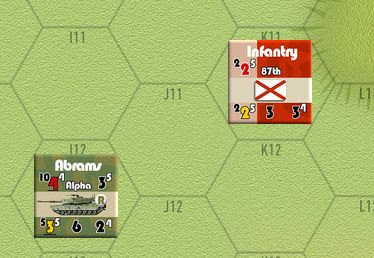 Since we’re dealing with relatively modern combat vehicles, World at War provides some units with the capability of firing while on the move.  Units that are moving-fire capable are indicated by an underlined firepower rating on the counter.  These units can move up to half their movement rate (rounded down) and then fire.  Note that they cannot fire and then move or move, fire and then move.  It’s only move and then fire – full stop. 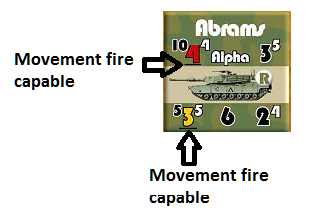 The penalties related to movement fire can be found on the trusty play aid included with your World at War game but, as a general rule of thumb, most units that conduct moving fire will suffer both a -1 to their firepower and a +1 to their “to hit” rating.  Note that the Abrams is a really high tech unit so it only suffers the +1 for the “to hit” rating.

Let’s get an example going: 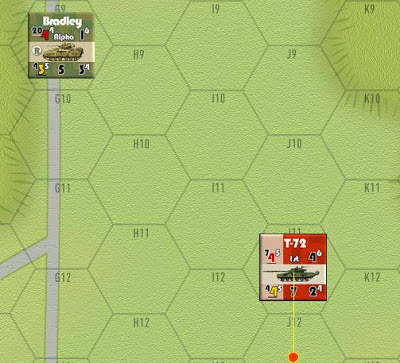 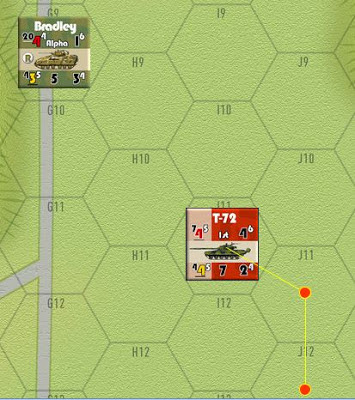 So far, we’ve only been talking about attacking and hitting.  It’s important to note that when an enemy unit is hit, it gets a chance to negate those hits.  How units can negate hits is determined partly by whether it’s a hard target or a soft target, so let’s start with hard targets.

All hard targets have a defensive armor rating in the upper right hand corner of their counter.

The Abrams defensive armor rating is 3/5.  So when the Abrams gets hit, it will roll 3 six sided dice and each roll that is 5 or 6 will negate one hit.  The number of dice the Abrams gets to roll can be modified by certain conditions such as being in certain terrain but I’ll talk about that later.

The T-72 above fires at the Abrams, scoring two hits on it.  The Abrams now gets a chance to negate those hits by rolling three 6-sided dice and hoping for a result of 5 or 6.  The Abrams rolls a 4/5/2.  One of the two hits is negated.


As stated above, hard targets and soft targets make defensive rolls differently.  Taking a look at an infantry counter, for example, you’ll notice that it has no defensive armor rating: 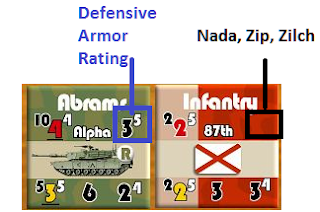 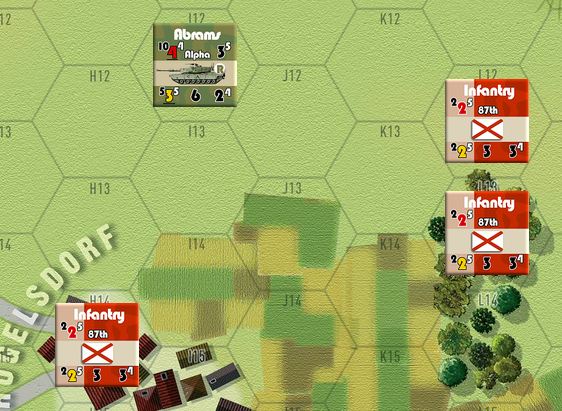 If the Abrams fires at the infantry in the woods hex (L13) and scores two hits, however, the infantry can roll one 6-sided die and negates one of the hits on a roll of “5” or “6”.  No matter what, though, it’s definitely going to take one hit.

This covers basic combat – attacking and defensive rolls.  Of course, there are several more aspects to ranged combat such as terrain bonuses and concealment but I believe this is enough to give beginners a grasp of the basics and as a supplement to the rulebook.  If you see any mistakes here, please let me know in the comments.