First off, the rules are a bit more streamlined (although the number of typos and mistakes in the rulebook are numerous) and better organized than the original Air Superiority game.  A badly-needed index is included in the back of the rulebook.  There seem to be more examples of play and diagrams as well as more explanation of key rules.  It doesn’t exactly hold your hand but the rulebook has a much friendlier feel for those just starting into the Air Power series.

There’s no doubt that the Air Power series achieves its impressive realism through layers of complex rules but for the persistent gamer, the mechanics start to make sense after enough plays that you can start to see the workings of a beautiful game slowly come to life.  Thankfully, Webster included many interesting and fun training scenarios in “The Speed of Heat” to help ease players into the system.  After two weeks of solid play, I’ve been slowly walking through the scenarios and I am indeed learning something new every day and the mistakes I’ve made are minor, which I believe is due to the nice scenario structure and the rules explanations.

Interested in the air-to-ground aspect of the game, I decided to learn these rules by playing through the scenario “Operation Farm Gate!  Vietnam 1964”.  This scenario features a pair of A-1H Skyraiders on a close air support mission over Vietnam during the early days of America’s involvement in the war.  The Skyraiders are supporting a US Special Forces outpost which is about to be overrun by four platoons of Viet Cong.  The VC, prepared for enemy aircraft, have brought along 3 anti-aircraft artillery pieces and set them up in a triangle around the combat area.

The US forces will almost certainly be overrun without air support.  The VC will attack on turns 6 and 12 so the player is under pressure to get in there and deliver the weapons quickly and on target.  The Skyraiders are heavily armed with air-to-ground weapons, each of which has:
3×750 lb. BLU-1 Napalm canisters, 6x 500 lb. HE bombs (Mk. 82), and 2xLAU-68 70mm rocket pods.

The Viet Cong AAA is not too accurate but it’s quite deadly when it does score a hit.  Two of the AAA pieces are ZPU-1s and there’s one very deadly ZU-23.  One of the ZPU-1s is positioned almost adjacent to the attacking VC platoons so this threat will need to be dealt with immediately.  The ZPU-1 to the south could cause some problems so that’s also a target.  The ZU-23 might get a lucky shot at one of the planes but as long as the Skyraiders stay far away from it and do some jinking, it should be okay. 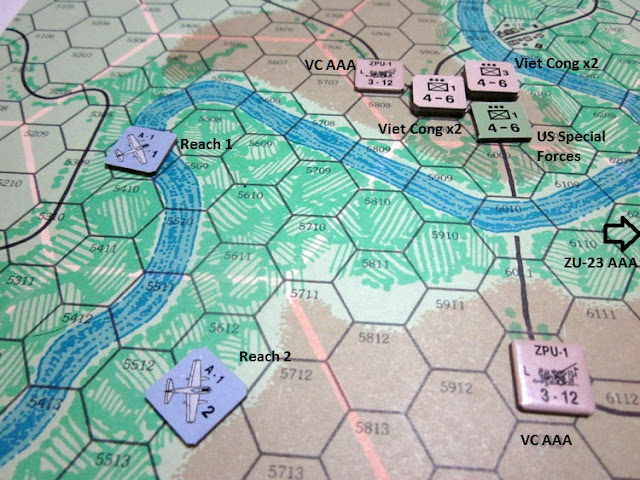 Reach 1 approaches the target area and fires off its 70mm rockets at the ZPU-1 AAA, getting a 2D result (“D” for damage) and suppression.  The gun crew is in a sorry state and Reach 1 now adjusts his heading for a napalm strike on the VC platoons in 5907. 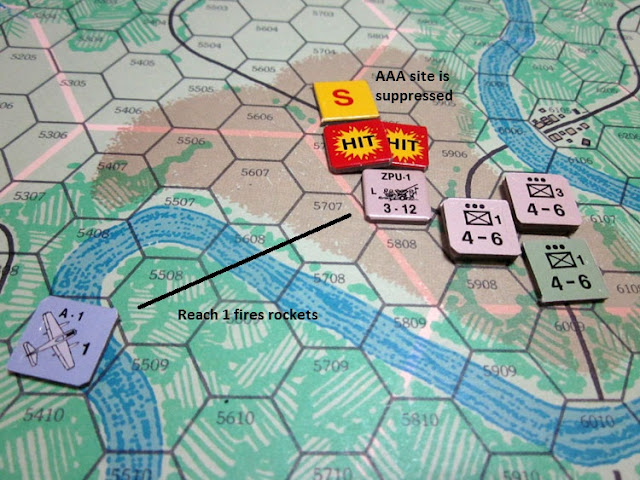 Meanwhile, Reach 2 goes south of the target area and fires off its rockets at the other ZPU-1, suppressing it but not damaging it. 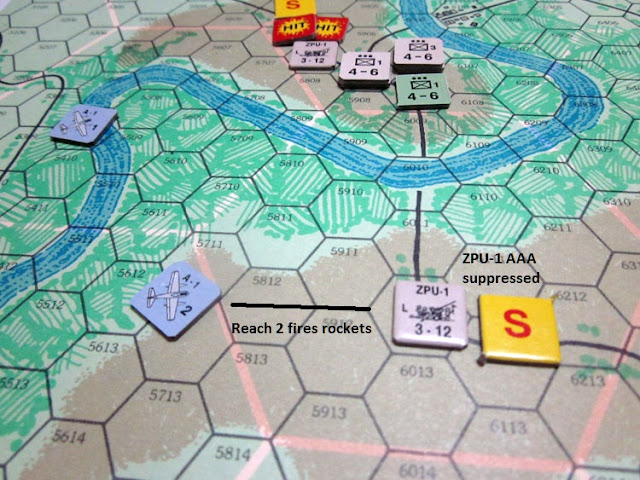 Reach 1 lines up the targets and dives from 3,000 feet, releasing early in the dive.  All three BLU-1 napalm canisters land on the 2 VC platoons in  5907.  Although the platoons take horrible casualties, they are still able to fight. 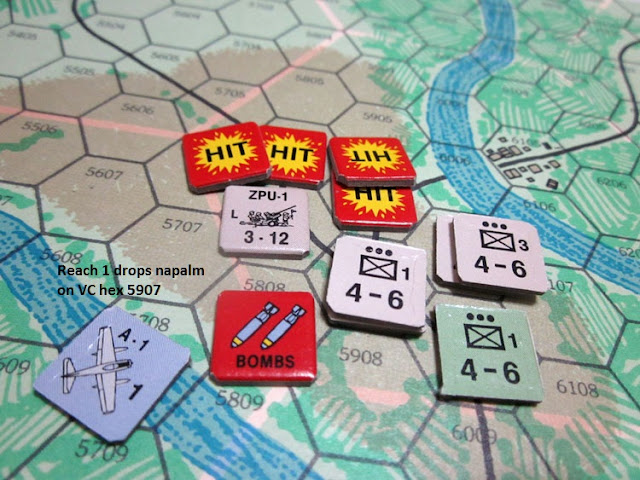 While Reach 1 passes over his target to the north, Reach 2 makes a tight turn over the ZPU-1 AAA piece to the south and begins his run at the VC platoons to the north of the US Special Forces outpost. 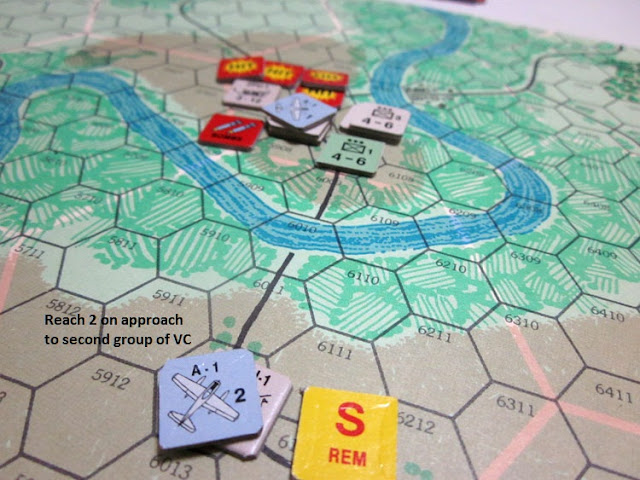 Reach 1, at 1,000 feet, pulls out of the dive over the VC in 5907 and passes over the second group of VC in 6007, dropping all Mk.. 82 bombs and scoring several hits despite the lack of time spent aiming at the target. 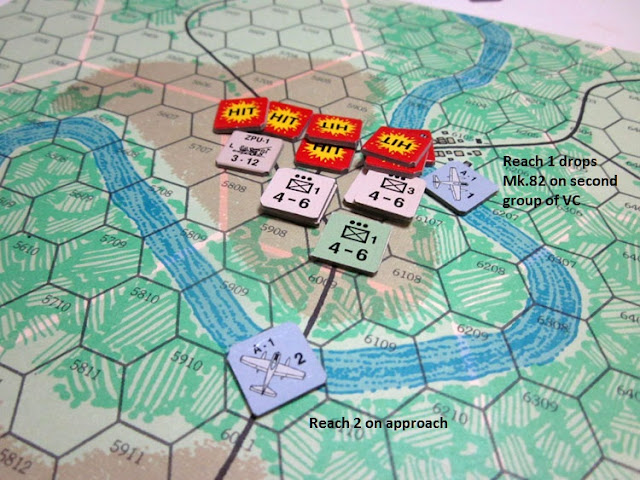 Reach 2 passes over the same group of VC moments later and drops napalm, completely eliminating both platoons.  After pulling out of the dive, the A-1 is hit by the ZU-23 to the east.  The A-1 is lightly damaged but still able to fly.  The VC attack at the end of this turn and manage to score a hit on the US Special Forces.

After making a tight turn and climbing from the dive, Reach 2 turns around level bombs the remaining two VC platoons with Mk. 82 but the hits are ineffectual and the two planes turn for home. 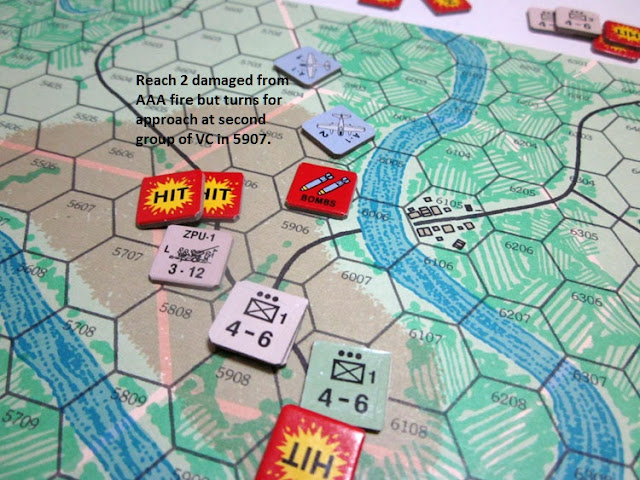 Time to count up the VPs. 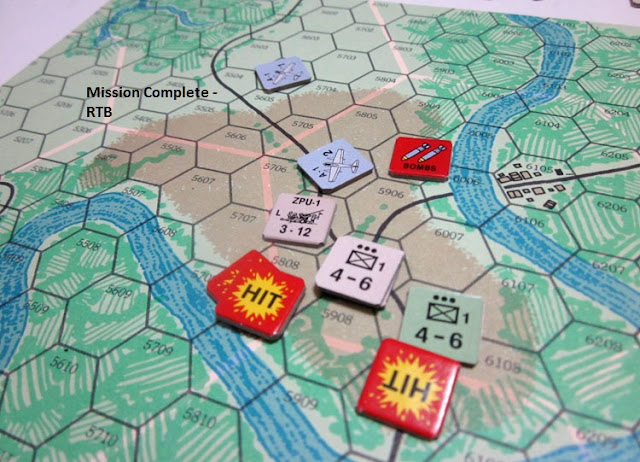 For both VC platoons eliminated, we get 10 points with an additional 5 for the damage inflicted on the other two platoons.  2 points are awarded for the 2D hit on the ZPU-1 AAA in 5807 for a total of 17 points.

The VC score 2 points for inflicting damage on the Special Forces unit and another 4 points for scoring 2L (light damage) on the Skyraider for a total of 6 points.

I can start to understand from this scenario why old prop-driven Skyraiders were often used for close air support in Vietnam. Although they are much slower than jets, these planes are small and maneuverable and they can hold quite an impressive air-to-ground weapons load (with 15 weapons stations!).  They are also fairly tough, with a vulnerability rating of +2.  The only downsides are the low fuel capacity (possibly made up for by the relatively low fuel consumption rate – I’m not an expert here) and the utter lack of fancy technology.  There are no computerized bombing systems, radar, or ECM so this is truly an aircraft from a previous generation but impressive in its performance nonetheless.  The A-1H was very gradually replaced by the A-4 Skyhawk.

Operation Farmgate was a first step by the Americans into what became a much larger involvement in the Vietnam War years down the road.  Farmgate was absorbed into the larger US war effort and American policymaker claims of the “advisor-capacity only” role of the US pilots eventually stopped as American involvement in Vietnam escalated over subsequent years.