In this scenario from J.D. Webster’s “Air Superiority”, published by GDW in 1987, a West German F-4F Phantom II pursues a fleeing East German MIG-21MF Fishbed after it strays into West German airspace.  Armed only with cannons, the F-4F is determined to shoot down the MIG-21 before it flees back over the border and the communists can claim they were attacked over East German airspace instead.

This is a solitaire scenario with the MIG movement determined through rolling on an “Evasive Movement Table”.  The player controls the West German F-4F.  Although this is not a complex scenario, it’s excellent for learning the basics of the Air Power system and a bit more exciting than the training scenarios in the book.  Even though this is a basic scenario, I’m not 100 per cent sure that I didn’t make a mistake (especially with a late game lag-roll) but I think I did a fairly good job of it.

The basics of this scenario involve using energy management to keep up with the MIG and get on its tail for a good firing position.  Each turn, depending on a number of factors such as speed, altitude and what has been done with the plane in the prior turns, you’re given a certain amount of energy (called flight points).  You can spend these flight points to move horizontally (Horizontal Flight Points or HFPs) or climb/dive vertically (Vertical Flight Points or VFPs).  You can do several types of turns of various Gs but making really tight turns can restrict your actions in some ways, especially when it comes to aiming weapons and using radar and other aircraft systems. 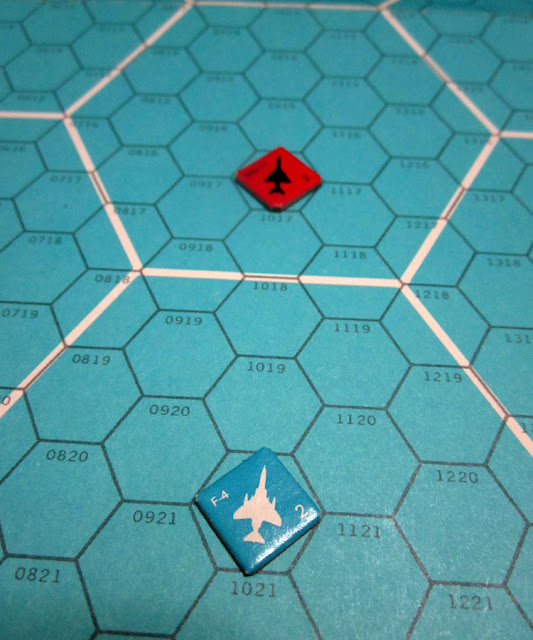 The MIG pilot, knowing that he is in big trouble, pulls some serious Gs and turns left, hoping to outmaneuver the less nimble West German fighter. 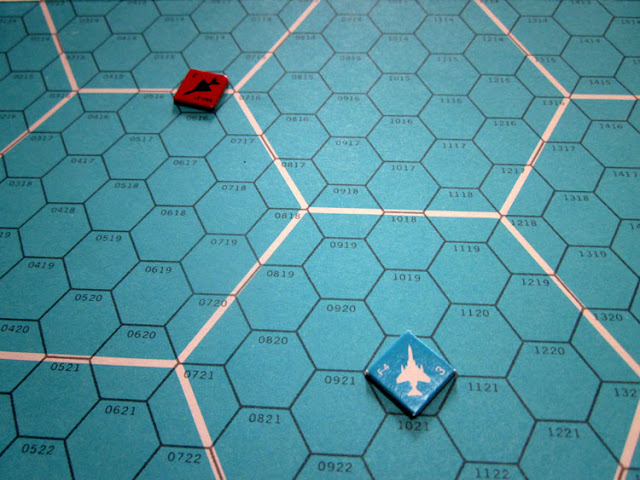 As the Phantom pilot, I’ve got a slight advantage in terms of speed and altitude, which I can use to help me get back on the MIG’s six o’clock.  I’ve decided to try and make a turn to intercept the MIG, cutting down his options while keeping mine open. With 6 Flight Points to spend, I use 3 horizontal flight points to go straight and do a hard turn NNW.  After that, I need to use up some energy to sustain the turn at its current rate, so I commit to a dive down to the same altitude as the MIG (costs 2 VFPs) move ahead a hex and this gives me the ability to finish the turn up, pointing my nose to the northwest.  I am now in the MIG’s 90 degree arc.  It’s too far away to shoot but I’m in a good position to get behind it next turn if the pilot does something silly. 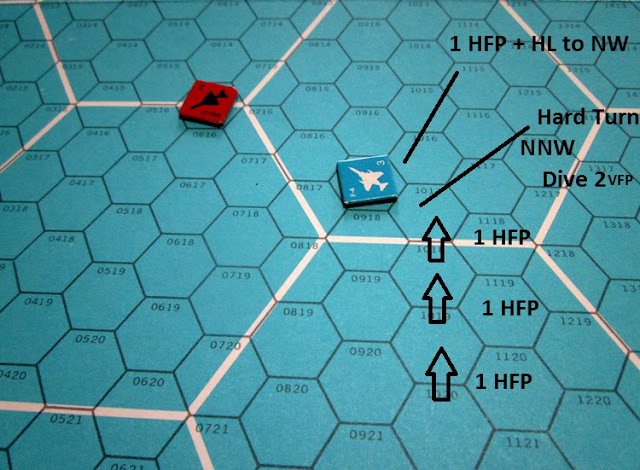 On the second turn, the MIG climbs to 12,000 ft and continues a slight turn.  Considering the Phantom has a much more powerful engine, this will probably be a fatal mistake as I can just push the Phantom behind the MIG at this point and go for a shot. 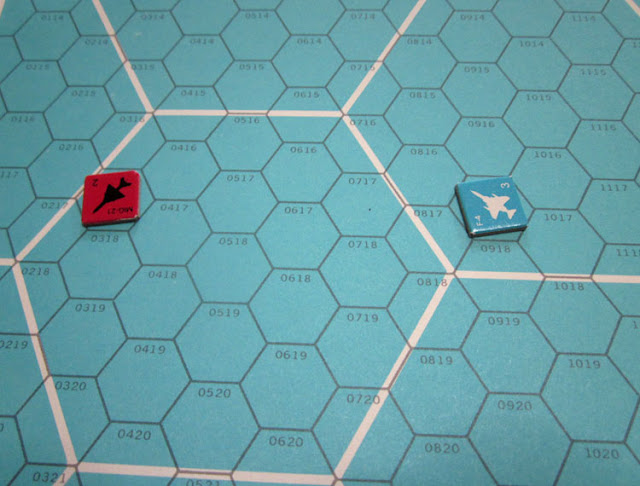 The Phantom has 6 flight points available and I have the throttle set at military power.  I want to avoid using brake turns or emergency turns to catch up with the MIG as doing so will incur some negative modifiers on hitting him.  As a result, I want to again use a hard turn after spending 3 horizontal flight points, climb to match the MIG’s altitude level and then another hard turn towards the MIG.  This puts the F-4 into hex 0516 and we’re in a position for a shot. 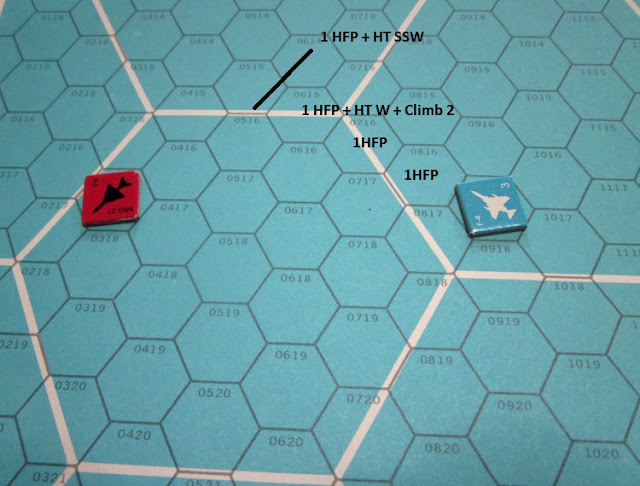 I try to use the F-4F’s radar to help with tracking the MIG and firing but my radar officer is apparently asleep and I can’t get a lock.  Needing a 4 to hit, I roll and get a 9.  Vulcan cannon rounds pierce the air near the MIG but no hits are scored. 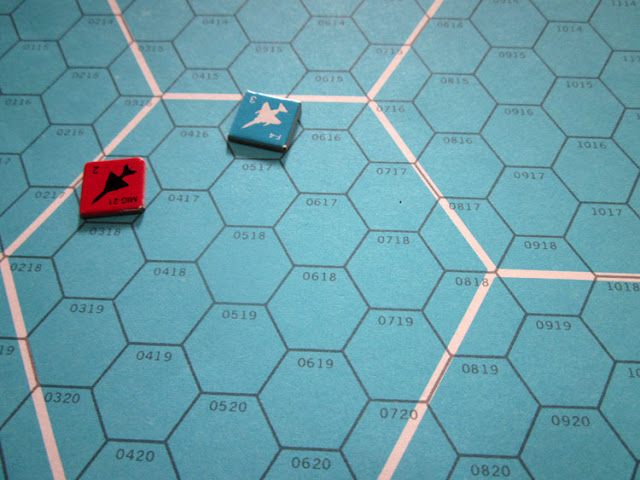 The MIG pilot must really be shaken because he climbs for safety again, ignoring the better turn abilities of his plane.  The MIG is now at 14,000 feet doing 500 mph and hoping for a break.  It’s not gonna happen. 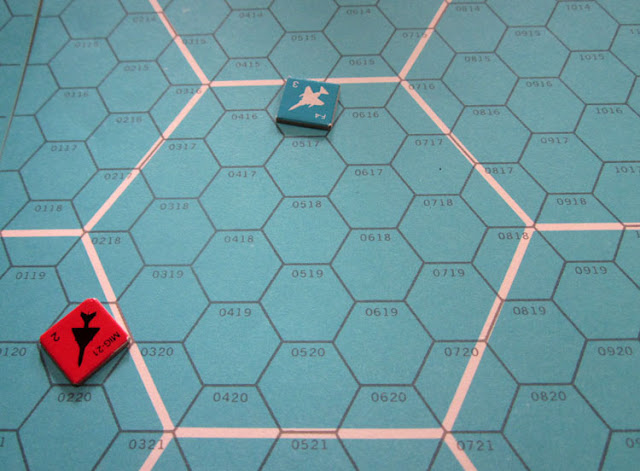 I’ve got only 5 Flight Points to play with since I was loathe to use my afterburners in the previous two turns and the climbing plus the turning has slowed the F-4 down to 500 mph, the same speed as the MIG.  I turn on the afterburners, move forward and begin a lag roll that shifts the plane facing 30 degrees to the SW in the hex that’s forward and to the right, continue towards the MIG until I’m on its tail and then pull a hard turn and climb. This puts me directly behind the MIG and a little underneath it while in a climb, which is as good as it gets. 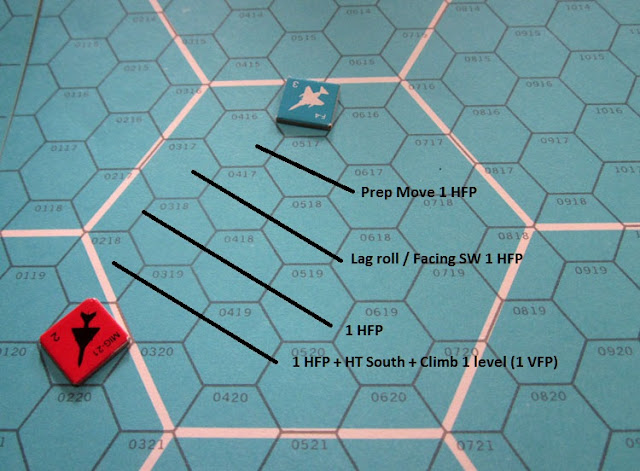 Again, the radar tracking fails to kick in and I curse the RIO, firing a stream of 20mm Vulcan cannon at the MIG, scoring a hit with an “8” (-2 modifier for being on the MIG’s 0 degree line).  I roll for damage and get a “2”.  Splash one MIG!

To score a kill, the most important thing is learning to use the strengths of your plane and how to manage your energy better than your opponent, much like what I’ve read of real air combat.  The Fishbed is quite maneverable and it’s tricky to nail them down with a fighter aircraft like the Phantom which is all engine.  It’s hard to resist the urge to go afterburners from the start, but keeping your hand off the throttle a bit definitely helps with turning ability.  Using VFPs (Vertical Flight Points) to climb also helps to drain off excess energy and keeps your nose pointed at the MIG’s tail rather than overshooting it.  I’ve played this scenario several times and watched my tendency to go full throttle result in a turning war that I can’t win.  This time, happily, was a bit different.