It’s the last day of a long campaign over Iraq in 1991 in my current game of Hornet Leader:  Carrier Air Operations. 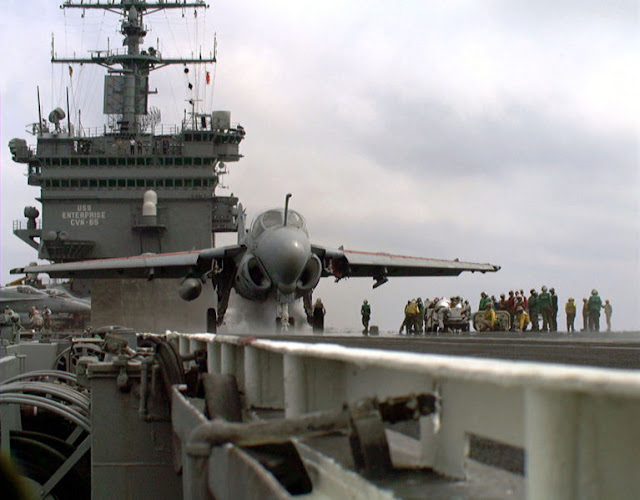 So far, I’m at 24 VPs, which is enough to score a “good” rating.  If I want to try for a “great” rating, I’m going to need a nice big target on this last day.  I draw “Government Building” and it looks like a nice target in Baghdad for us to finish off the war.  It’s worth 4 VPs and it also has an “Overkill” trait, which means that causing 14 or more points of destruction will garner us 1 more VP.  Add to all this the fact that I have an “Important Target” card (wonder who?) and I get another VP for completing this mission successfully.

Unfortunately, these things come at a high price.  For the squadron that meant the possibility of facing a lot of enemy fighters (12 maximum).  Needing 10 hits to destroy the target would mean exercising a good deal of prudence when selecting ordnance.  Fortunately, I have 11 special option points to spend so this makes things a bit easier.

I’m basically forced to take any pilots remaining who are still okay.  Most of them are 1 stress point shy of being shaken.  “Brick”, my E-2C Hawkeye driver is at 8 stress points so he’s already shaken badly and near the breaking point but I need a Hawkeye on station to help ward off bad events and give my fighters a precious +1 to their air to air rolls.

I have two options here in terms of spending the SOs.  I could either get a lot of special weapons or buy refueling and a couple of special weapons.  I go for the latter option.  This means that we’re going to have to hit the target going low over it.  I’ve chosen Mk. 83 and Mk. 84 bombs for my A-6 Intruders.  I’ve got “Moon”, the EA-6B Prowler for support against radar sites an F-14 and an F-18 assigned to air cover and an F-18 (“Griffin”) with a mixed loadout.  I have a bad feeling already going into this, especially with all the low altitude AAA near the target.

On the way to the target, 3 AAMs are jettisoned in order to deal with bandits.  Once over the target, I have some beautiful luck by pulling only 2 enemy planes.  The AIM-54 Phoenix missiles take out both of them and the two planes I brought along for air coverage have nothing to do for the rest of the mission.

Some bad shots by “Moon” end up causing one active SAM-10 site to constantly throw up missiles at the raid.  Eventually, everyone reaches the target and the Mk. 83 bombs are let go.  14 hits are scored, earning the overkill VP and everyone gets home safe.

And with that, day 9 is over, the campaign is finished and we’ve scored a total of 31 points, a “great” rating.

Here are some random stats:  The squadron started with:  1 Newbie, 2 Green, 6 Average, 2 Skilled, and 1 Veteran and we now end with 1 Newbie,  7 Skilled, 3 Veterans, and 1 Ace.  Both Green pilots (“Waldo” and “Dingo”) were promoted twice during the campaign and “Dingo”‘s high Cool rating helped to keep him repeatedly in the fight.  Starting with 80 Special Options points, 36 SOs were spent on promotions at the start of the campaign.  10 points were spent on mid-air refueling and the rest were spent on weapons.  An average of 3 SOs were spent per mission throughout the campaign.

The AIM-54 Phoenix was the special weapon of choice with a total of 15 points spent only on the Phoenix missiles, which had a 100 per cent hit rate.  3 points were spent on AIM-120 AMRAAMs, none of which hit at all during the campaign.  The rest of the SOs were spent on a variety of air-to-ground weapons (GBUs mostly).

13 total missions were flown, 12 targets were destroyed and 6 targets were left untouched.  Most of the remaining targets were in the northernmost band of Iraq.

The air-to-ground weapon of choice was the Mk. 20 cluster bomb at low altitude (over 30 were dropped throughout the campaign) while the AGM-65 was most effectively employed against ground targets from high altitude (about 20 were launched and most hit their targets).

I know it’s a bit nuts to track all these stats but I always enjoy video games (GTA, etc.) that track all the stats of the player to show you how everything you’ve done.  I thought it would be fun to do the same with Hornet Leader.

Although the score was high and the loss of planes was very low, this was an “introductory” campaign so I’m not overly impressed with myself.  Here are a couple of my own rules of thumb that seemed to work well:

1.)  I never let any planes leave home without an ECM pod.
2.)  I always start off with the small missions and build up pilot experience gradually
3.)  I try to take at least one plane that will give an SO benefit when starting a long campaign.
4.)  It’s always worth it to take an E-2C Hawkeye to help with events and situational awareness
5.)  I found it helpful to come at a target from two (or more) separate directions so I can hit long-range fighters in the approach areas outside the range of my main strike force.
6.)  I try to pile on 1.5x the number of weapons counters I’ll need to take out critical sites.

Of course, no rules of thumb are perfect and there are times when you do everything right and still lose someone.  The shoot-down of Banzai in Mission 12 was a perfect example of this problem.  The fun of the game often comes out when you have to roll with these sorts of punches.