We’re about halfway through the Iraq 1991 campaign for Hornet Leader and so far, the squadron is doing okay despite some setbacks.  The first few days of the campaign featured some low-risk targets while day 3 was a scramble for a close air support mission that paid off nicely.  Unfortunately, the secondary target, a series of AAA sites, was not successfully destroyed and the result was just a bunch of stressed out pilots.

The target list comes through in the morning and, oh it’s terrible.

We end up getting 4 targets, all of which feature improvements.  This means that until the target is destroyed, the squadron suffers some kind of setback.  The minor airfield target, for example, results in the possibility of an extra bandit over every target.  Looking at the targets, I decide to take out the two most damaging improvement cards.  This means we’ll be hitting the Command Center and the secondary target, Scud Launchers.  If the Command Center isn’t destroyed, this means that the squadron will lose out on recon, intel or infrastructure damage points every day while failure to destroy the Scuds will result in -1 Victory Points each day.

The Command Center is located very close to Baghdad and there are possibly a total of 9 bandits over the target.  The only way to get at this target, which requires 9 destruction points, is to hit it with low altitude bombing.

The plan is a little complicated but I think it should work. One F-14 Tomcat (“Sparky”) will come at the target area from the north while the rest of the flight comes in from the south.  The lone Tomcat will pick off targets with AIM-54 Phoenix missiles and AIM-7s while the main body of the flight will fire off 3 HARM missiles and take out the deadliest SAM sites (SA-10s) around the target.

After that, the main strike package will move up towards the target, switch to low altitude and use rockets to suppress enemy AAA.  While over the target, both A-6 Intruders will unleash Mk. 83 and Mk. 84 iron bombs.  An F-18 will also help with both air-to-air and the bombing run, if necessary.  Finally, the E-2C Hawkeye will be around to provide help with air-to-air combat and situational awareness.

With the plan established, the flight takes off and is attacked by shoulder-launched SAMs on the way to the target.  Deciding not to risk losing any precious ordnance designated for the target, I choose not to suppress and the result is +1 stress on one of the F-14 Tomcat pilots and +1 stress on Dingo, the green pilot.  Dingo, who has 3 stress already from yesterday’s mission, is now shaken and suffering another -1 on air to ground attack rolls.

Over the target, there ends up being only a handful of fighters.  A MiG-25 and a MiG-29 present the greatest threat and both are shot down by Phoenix missiles very quickly.  Having a single F-14 wander in from the north works well and Shifty manages to take down any other bandits in the area.  The main strike package moves up from the south.  One of the A-6s (“Camel”) uses rockets to suppress a AAA site.  Finally, the package gets up to the target area and although Dingo misses with most of his ordnance (scoring only a few hits with one bomb while missing with all the others), the command center is completely wrecked by the Camel.  One of the F-18s follows up with a Mk-84 and this ensures destruction of the complex.

Everyone makes it home safely.  “Sparky” is promoted to Veteran status.  Sparky earns 1 cool and his air-to-ground rating goes up.  3 VPs are added to the squadron tally and we now have a total of 15 points.  This puts the squadron’s performance in the “adequate” range of ratings.  However, if the Scud Launchers are not destroyed in the secondary mission, we’ll lose 1 VP and be downgraded to a “poor” performance rating.  No pressure!

Well, here we go again – trying to frantically accomplish missions with an improvement trait so that we don’t lose our good momentum in this campaign.

If we don’t hit the Scud launchers in the secondary mission, we’ll lose 1 VP for each day the mission is on the table.  Not wanting to spoil my efforts so far, I’ve decided to push my remaining pilots with a four plane raid.

All I’ve got is an F-14 Tomcat (“Waldo”), an F-18 Hornet (piloted by “Griffin”, a pilot who is stressed and quickly reaching his breaking point), an EA-6B Prowler (“Moon” who is worse off than Griffin right now), an A-6 Intruder (“Shifty”), and an A-7 Corsair II (“Spike” – who is a brand new pilot and has yet to fly a mission!) to choose from here.

“Waldo” and “Shifty” go in, not due to any special skill but due to the fact that they are fresh.  “Moon” is out.  I doubt he would make it through the mission if something went wrong.  “Griffin” goes in with some reservations and I reluctantly pick “Spike” to go along and hope the new pilot doesn’t mess things up too badly.

The AAA and SAMs around the target aren’t bad at all and the fact that these Scud Launchers are vehicles means that I can sit back from the target and fire off Mavericks at them without going near the enemy defenses.  There’s no subtlety here – just send the entire package straight at the target and sit back, hoping that there aren’t too many bandits.  Unfortunately, I draw an “Incoming Bandits” card over the target but we’ve completely flattened the Scud Launchers by that time and the guys bug out before any interception occurs.  On the way back, we meet the usual enemy SAM launches but “Spike” uses his remaining AtG weapons to suppress them.

At the end of the day, I decide that everyone in the squadron will rest on Day 6.

I shouldn’t have done it but I pulled four cards out for the target list today and ended up getting some decent pulls anyway.  I decide to go for Enemy Tanks in order to avoid the -1 VP penalty for not destroying it immediately.  Along with that, I go for a convoy as a secondary target in order to cancel one of the improvement cards that is currently hampering my intel. 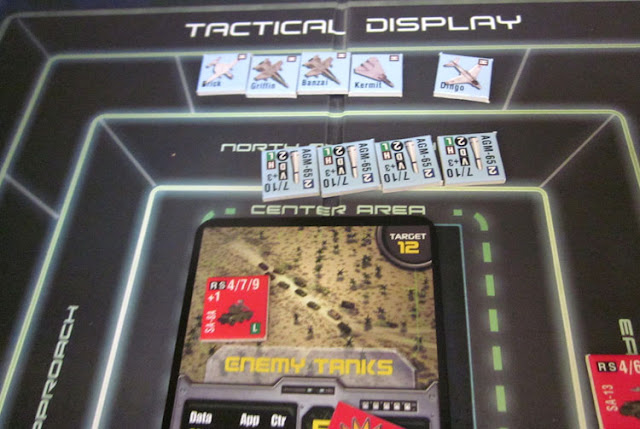 I pull the same trick as the previous missions, sending in an air-to-air fighter in the south to hit at enemies from stand-off range while the main strike package goes in and fires off missiles just beyond enemy AAA and SAM range.  AGM-65s find their targets despite a rough first turn where a MiG-29 manages to damage Dingo’s A-6 Intruder.

This mission was only worth 1 victory point and it looked easy but I wasn’t taking any chances with only two days left in the campaign.  With only three planes and a target that was located way up north near Hakhmur, the raid would need to sacrifice 3 weapon points per plane to have enough fuel for the mission so for 3 special option points, I went ahead and bought mid-air refueling. I have 12 special option points left for the rest of the campaign. 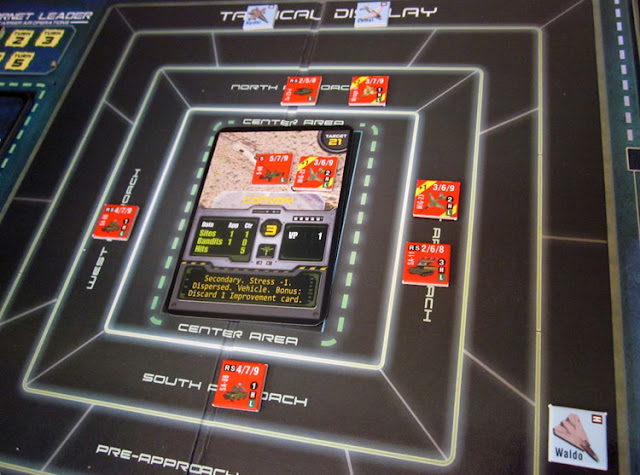 The flight comes in and there are 3 bandits near the target.  Waldo takes out a MiG-23 and a Mirage III before “Raider” shoots down a MiG-23.  The target is lightly defended after that and, as with the enemy tanks, AGM-65 Mavericks do the trick and eliminate the convoy.  “Raider” and “Camel” are both stressed out at 7 and will be unable to fly tomorrow but the good news is that one of the improvement cards that had been hounding me is now gone.

The campaign will be over tomorrow.  Tallying up my VPs, I’m currently at 19 points – enough to earn me an “adequate” rating.  If I want to get a “good” rating, I’ll have to try hard.  If I want a “great” rating, I’ll need to throw everything I can and use everything I have learned so far to crush the enemy.

I decide against pulling cards, hoping to avoid any scrambles and afraid that I might suffer from Penalty or Improvement cards.  I go for the enemy barracks, worth a nice 4 victory points.

6 planes head out.  “Shifty” and “Dingo” are the main strike package with Mk. 20 cluster bombs while “Waldo”, “Kermit” and “Banzai” are mostly for air cover.  “Brick” (E-2C Hawkeye) comes along for mission support.

On the way to the target, we get some very bad cards (Political Limitations – can’t destroy targets in approach area – only suppress), which “Brick” rolls successfully to ignore.  The “Shore Leave” card lets me destroy a site and replace it with 3 bandits.  Thanks but no thanks.  “Brick” rolls a 7 to ignore this second event.

We seem to have the pattern now as Waldo pops in from the north and fires off AIM-54 missiles and AIM-7s at nearby fighters and also distracts nearby AAA and SAMs while the rest of the package sneaks in from a totally different direction.  This time, the raid goes low over the target and “Shifty” and “Dingo” drop all their Mk. 20s on the barracks.  “Banzai” lands the final hit, destroying the target but before the raid heads for home, an S-60 AAA site near the target fires at “Banzai”.  “Dingo” fires rockets at the AAA sites to suppress but it’s no good.  “Banzai” rolls to evade the AAA fire but rolls a 10 both times, and is shot down!

The flight heads for home and we get an “Important target” for the next mission (worth +1 VP), which is good since we lost a VP due to losing “Banzai’s plane.  For the Search and Rescue roll, I get a “10” and “Banzai” is recovered quickly but obviously stressed out from the experience.

Tomorrow will be the last day of the campaign.