In the past few days, I’ve been playing through a long (9 days) campaign in Hornet Leader:  Carrier Air Operations.  In Part 1, the missions had been fairly successful, if low risk, in getting some victory points on the board and giving my pilots some experience.

After day 2 ended and most of my pilots were rested, I decided to start going for the big targets.
Day 3:  Scramble!
Things didn’t quite work out the way I planned, as I picked up a Scramble card on Day 3.  Upon getting a Scramble card, you have to stop drawing targets and immediately do the mission on the card, which was close air support (CAS).  It’s actually not a bad mission, worth 4 victory points but it is quite stressful due to the risk of hitting friendlies.  I sent a strike package in with F-14s and A-6 Intruders, using Mk. 20 cluster bombs to score hits on the target.  Due to lots of good rolling, conservative use of bombs, and the use of good pilots, there were no friendly fire incidents and everyone made it home safely. 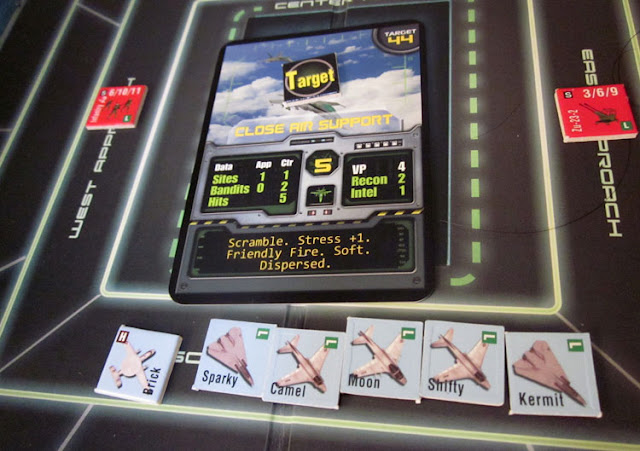 Day 3 was over and some of my best pilots were quickly gaining enough experience to get promoted to a better skill level.  My victory points were a meager 9 VPs total, so I needed to step it up a bit more.  Otherwise, with no pilot losses and a string of successful missions behind me, things were going okay.
Day 4:
On the morning of Day 4, the target list is pretty appetizing.  I pulled Supply Depot, AAA sites, Laboratory, and Radar Installation.
I chose the target worth the most VPs – the Laboratory.  Although it adds stress on the pilots, it also gives a bonus to experience.  I took the AAA Sites as a secondary mission and discarded the other two targets.

Day 4:  Mission 5 – Laboratory:
With 5 attack planes plus the Hawkeye going in, this was a really big shoe without precedent in the campaign so far.  The lab takes 9 hits to destroy and the large number of AAA and SAM sites near the facility provided a very thick layer of air defense that made going low over the target difficult and I had no regular ordnance that I could use effectively for stand-off attacks against such a hard target.  I decided to spend some precious special options points to get some GBU laser-guided bombs for accurate high altitude bombing.
Just in case something went wrong, I decided to hedge my bets by sending in one A-6 Intruder at low altitude to finish off the target in case the GBUs missed or had to be jettisoned for air-to-air combat.
Nearing the target, we pulled a “Clear Skies” card, which meant no adjustment.  A pair of Mig-25s circling over the target area were almost immediately shot down by AIM-54 Phoenix missiles before we were even near the approach area.  Camel made short work of the SAMs near the target while Griffin and Banzai dropped GBUs at high altitude.  Of course, I needed one more hit on the target to destroy it and I ended up sending in Shifty at low altitude to drop Mk. 84s and Mk. 83s.  SA-6 missiles north and south of the target area launched at Shifty but his ECM jamming confused both missiles and it was RTB.  On the way home, the squadron got attacked by SAMs but there was enough air-to-ground ordnance left with Shifty to suppress it. 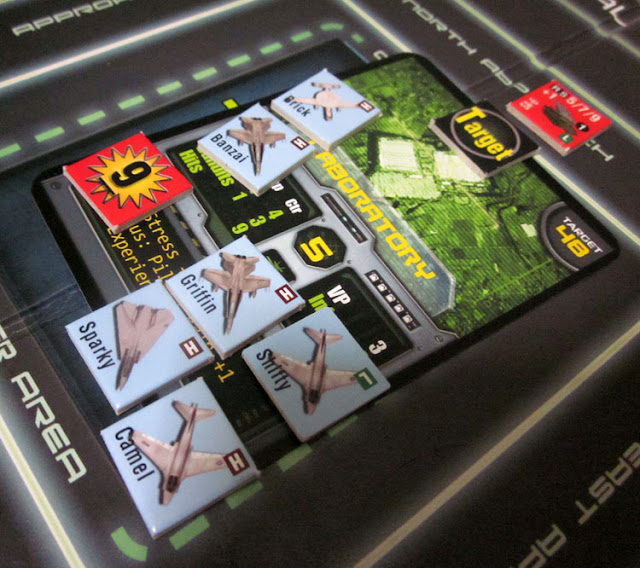 While recording 3 more victory points for the mission, I checked my pilot experience and saw that 3 of my pilots gained promotion!  Shifty, Griffin, and Camel all went from Average to Skilled.  This puts the squadron at 7 skilled pilots, 2 average pilots, 1 green, 1 new, and 1 veteran.  Not bad!
Day 4 – Mission 6:  AAA sites
Earlier in the day, I had assigned pilots to this mission, which required 3 planes.  I decided to start working on getting the newer guys some experience since things were going so well.  I picked Dingo, a green A-6 Intruder pilot to go with two skilled pilots, “Moon” (EA-6B Prowler) and “Raider” (F-18 Hornet) to go for this one.  Since the target was a bit further up north, weapons had to be sacrificed for fuel.  This hurt, especially since Moon can only carry 4 AGM-88 HARM missiles and there was always the chance that the flight would run into enemy aircraft so the F-18 needed to have some AAMs ready.
Dingo would be doing most of the firing at the target and since the AAA were all vehicle-mounted and effective at low altitude only, I opted for AGM-65 Mavericks.  These missiles are great because they are very good against vehicles and they can be fired quite far from the target.  Unfortunately, they take up considerable weight, which was already hounding my planning for the mission.  I briefly considered dumping the ECM pods for the sake of weapons or spending some points for air-to-air refueling but decided against it.
On the way to the target, I scored with a “Rack Time” card, which reduces the stress of some pilots in the squadron.  I used it to reduce the stress of the pilots who flew this morning’s raid, hoping to get them back in the air asap.
As it happened, the flight encountered no enemy aircraft at any point during the mission and the air-to-air missiles ended up being completely unnecessary.  “Moon” started off by firing HARMs at the long range SAM sites to the south of the target, and missing spectacularly.  “Raider” found no joy either.  It was at this point that Dingo fired Mavericks and HARMs at the AAA targets, destroying one after the other.  On the last target, however, I rolled a “1” and scored a miss.  I used a “Lucky Break” card for a re-roll.  Another miss.  One AAA site shy of scoring a complete mission, the pilots shrugged and turned for home, completely out of air-to-ground weapons.
To add insult to injury, the flight encountered AAA on the way back to base and everyone incured a +1 to stress. The flight arrived back home, with Dingo and Moon badly shaken.  They have been taken off the flight roster for tomorrow in order to help them relax.

Update:  Sorry about the strange formatting of the photos and text for some browsers.  Blogger wasn’t cooperating with me today.