Having some time off during the holidays has given me the chance to get out Hornet Leader: Carrier Air Operations to run through a nice long campaign.  This time, the squadron is playing through 9 days of the 1991 Gulf War. 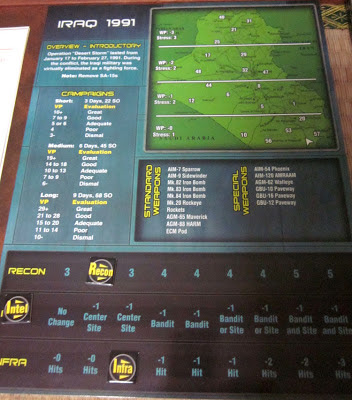 First off, choosing pilots wasn’t too hard.  I decided that I wanted to balance out air-to-air and air-to-ground capability by having a mix of dedicated aircraft for each role along with some planes that could handle both roles comfortably.  In other words, I picked 3 F-14s for air combat roles (callsigns Kermit, Waldo, and Sparky), 3 A-6 Intruders for dedicated air to ground (Camel, Shifty, and Dingo), and 3 F-18s to balance it all out in both roles (Raider, Griffin, and Banzai).

I had a few planes left to choose, so I took an E-2C Hawkeye (Brick) and an EA-6B Prowler (Moon).  The Hawkeye gives you the ability to ignore an event on 4+ and also offer situational awareness and some bonuses to air to air.  The EA-6B is great for picking off radar sites and gives planes nearby a bonus defensive against enemies.  Finally, I needed to pick 1 newbie for the squadron, so I took “Spike” in an A-7 Corsair II.  This plane isn’t great with its limited air-to-air payload capability and dog knows that a newbie pilot isn’t exactly a squadron commander’s dream but this choice awarded me 12 special option points, which I could certainly use after using 36 points up in promoting two Average pilots to Skilled.

There aren’t any “great” pilots in the squadron but everyone (save for Spike) is fairly decent.  The green guys are close to promotion, needing only four or five experience.  In such a long campaign, it shouldn’t be too hard to get them to at least average or better in a short time.

The first mission comes up and we draw all secondary targets.  I guess the air force got all the good targets today.  I make the SAM sites a primary mission and some enemy troops as the secondary mission for the day.  There are some oil storage facilities offered up as potential targets, but I decide against it.  The sites are way up north in Iraq and require a lot of planes.  I want to start off the first day a bit easy, get some guys some experience and build things up until we’re ready to take on the bigger targets.  At least that’s the plan.

For the wild weasel mission, I pick an Intruder (“Camel”), an F-14 Tomcat (“Kermit”), an F-18 (“Griffin”) and the EA-6 Prowler (“Moon”).  I also send along the E-2C Hawkeye (“Brick”).  After loading up the ground attack planes with AGM-88 HARMs, and AGM-65 Mavericks and piling on some air-to-air missiles on the Hornet and Tomcat, the flight launches and reaches the target a bit south of Baghdad.  On the way to the target, the group gets bounced by some MiGs but comes out unscathed though low on air-to-air missiles.  I’m actually not too phased by this because I intend to launch missiles at the target as quickly as possible and get out of there before any enemy planes can even get close to the flight.

Over the target, things don’t start off well due to bad weather, which gives the pilots a -2 to hit with AtG weapons launched from high altitude.  On the bright side, bringing the Hawkeye along gives everyone lots of situational awareness and even the less skilled pilots can get off their shots long before the enemy can react.  The SA-10s quickly disappear off the radar screens as the HARMs hit home followed by some Mavericks for good measure.  Everyone gets ready to RTB when one of the nearby SAM sites off to the east gets a lock on Brick, forcing him to pull some G’s to escape the missile.  Otherwise, everyone gets back home safely.  Brick is at 6 stress points and is shaken.  It is decided that he will not be flying for the rest of today or tomorrow.

Not much to say about this one. Two F-18s (“Griffin” and “Banzai”) are sent out with an F-14 Tomcat (“Waldo”) as escort to drop lots of Mk. 20 ordnance on ground troops.  The mission is just north of Kuwait and is such a milk-run that it is marked as -1 stress for the pilots.  I decide to send out a mix of pilots.  “Waldo” is green while “Griffin”is average and “Banzai” is skilled.  Things go off without a hitch and we even pick up a card, “Elusive Flight Plan” that allows the squadron to discard an event. 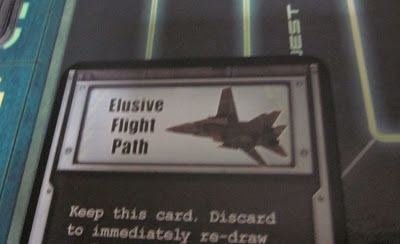 The pilots return home and no one has accumulated any stress from this mission, which is fantastic.  However, with five of my other pilots a bit stressed from the raid earlier today, I’ve decided that tomorrow we’re going to take it easy and let everyone recover a bit.

I pulled some pretty high value targets this morning, including a power station and a command post but these required my heavy hitters so despite the high victory points on the table, I threw out the targets in favor a nice calm fighter sweep.  Deciding to get some of the new guys a bit more experience, I put up “Waldo”, “Sparky”, and “Raider”, two F-14s and an F-18.  I’ve still got some special option points so I bought two AIM-54 Phoenix missiles for each Tomcat and a pair of AIM-120 AMRAAMs for the F-18.

Just before the flight gets underway, orders come down for shore leave, which reduces the squadron stress by 2.  This is great news and it means that tomorrow, I should have all my guys back to near 100 percent and ready to fly.

During the sweep, the flight ambushes a big enemy flight.  A pair of MiG-25s are quickly dispatched by the Pheonix missiles.  Griffin fires off a pair of AIM-120s at two MiG-23s but misses.  The Floggers and several MiG-21 Fishbeds close in towards the flight but thanks to good situational awareness from the flight leader (along with much better missile range), the planes are quickly dispatched and the flight returns home.  Waldo is promoted from “green” to “average”, which is terrific.  The whole point of taking these first easy missions was to get everyone’s skills up a bit.  I am getting worried about the special options points, which are now dwindling rapidly, reducing access to things like special weapons, refueling, etc.

Day 2 ends and Brick is down to 2 stress.  Tomorrow, I will take any high value targets that come my way.