About a week or so ago, I posted a homebrew scenario I had made using the All Things Zombie maps with the Heroes of the Gap counters.   After lots and lots of playtesting, I think I’ve finally gotten it to the point where it’s balanced out a bit.

Briefly put, the Soviet player gets the Nicaraguan forces from Line of Fire 12 along with the Spetsnaz against the might of a few defenders from the Texas Army National Guard and a group of grim but heavily armed and determined police and civilians.  The scenario takes place during the Soviet invasion of the United States and the Russians are trying to capture the police station and a military command installation in the town of Chaparalle Falls, TX.

As shown on the map below, the two objective hexes are indicated by a black circle while the Nicaraguan approach is signified by the purple arrow and the Spetsnaz landing spots are indicated by the red box at the top of the map.  Note that the Nicaraguans are allowed to enter from any hex on the west side of the map and the Soviet Spetsnaz can be parachuted absolutely anywhere on the map – the image below just shows my approach for this game. 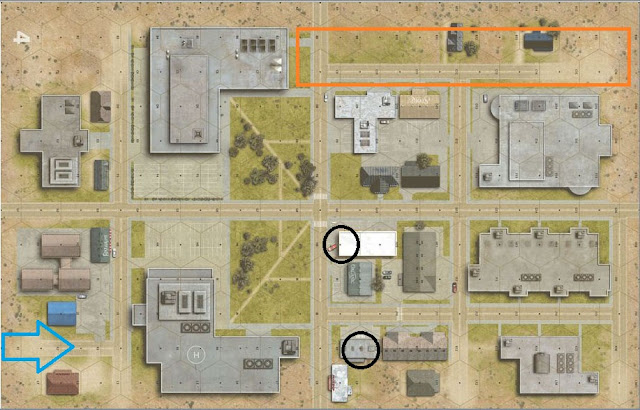 The American sets up first, with the two Army National Guard squads in the center of the map, defending H9 and H11.  Meanwhile down south, the police and civvies (represented by the 2-5-4 German squad counter) barricade the police station and sit tight, waiting for the attackers. 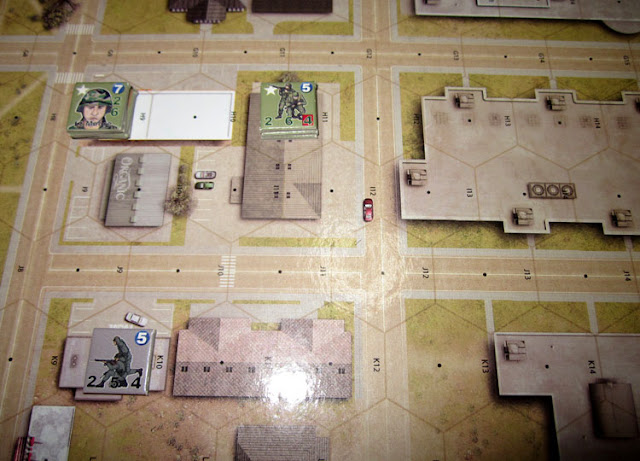 The Soviet Spetsnaz parachute in on the northern outskirts of the town.  Although some of them land a bit off course, everyone ends up okay. 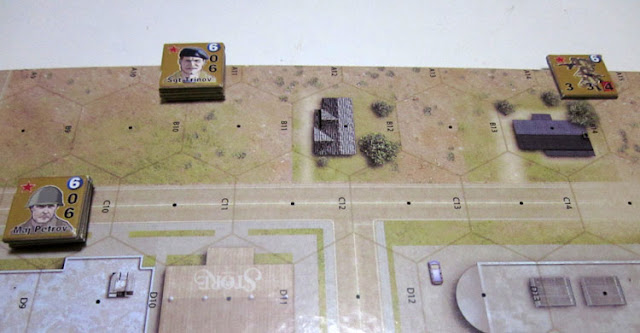 To the west, the Nicaraguans led by Lt. Chamoro, move into the large building complex across the street from the police station.

By the end of turn 1, one of the US squads moves one street over, hoping to catch any Soviets that try to come straight down the street. 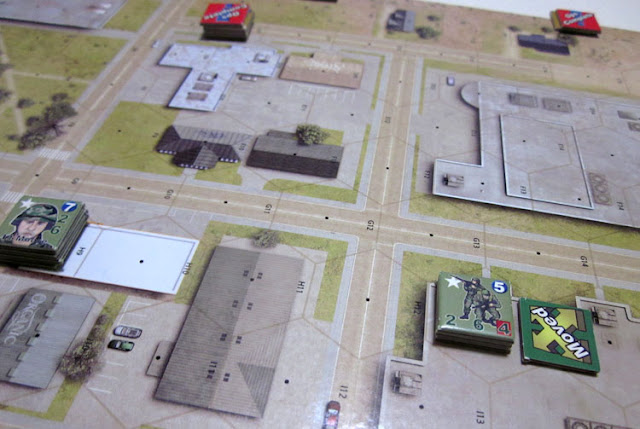 By turn 2, the US gets an M113 on the board after the Russians start moving south towards the Army National Guard positions. 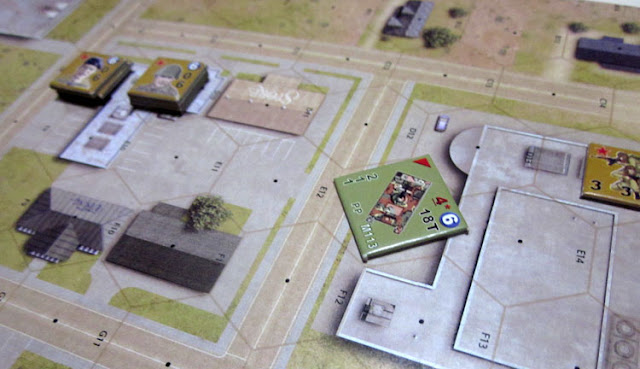 The US player is trying to keep the Russians from moving through the buildings, which offer excellent cover, and instead try to approach through the open towards H9, which would not end well for them. 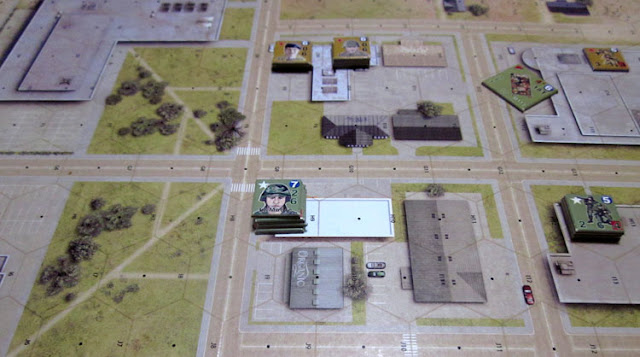 As the Russians creep down, the nearby M113 pivots and fires at Maj. Petrov, but ends up with the creation of a hero, Drago. 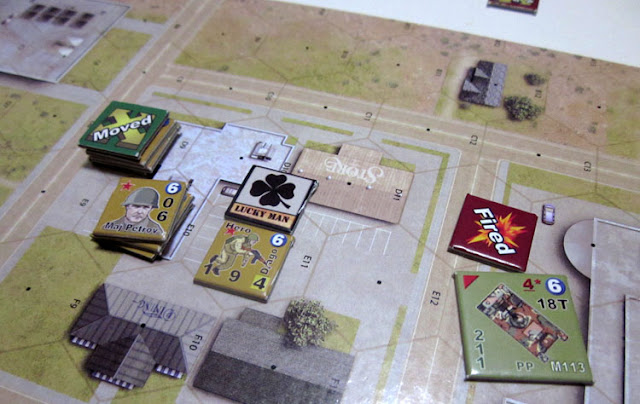 Immediately afterwards, a lone Soviet squad attempts to close assault the M113 adjacent to them, but fail in their attempt. 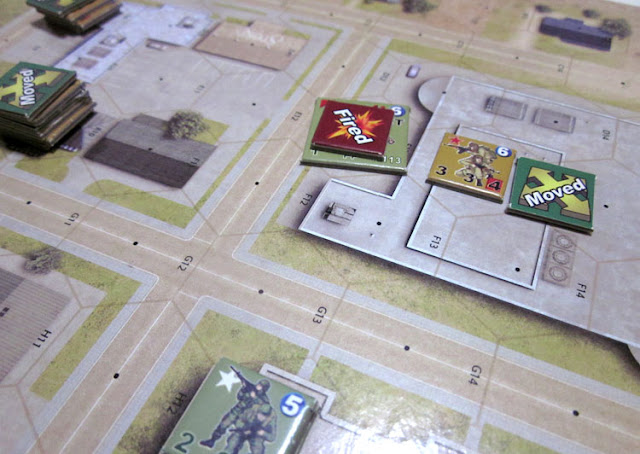 The US gets a Cobra helo for support, which swoops down at the end of turn 3 for a shot at the Soviet squad near the M113.  Unfortunately, it misses completely and speeds off the board. 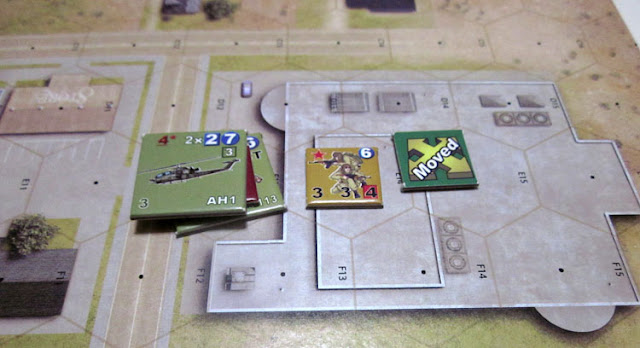 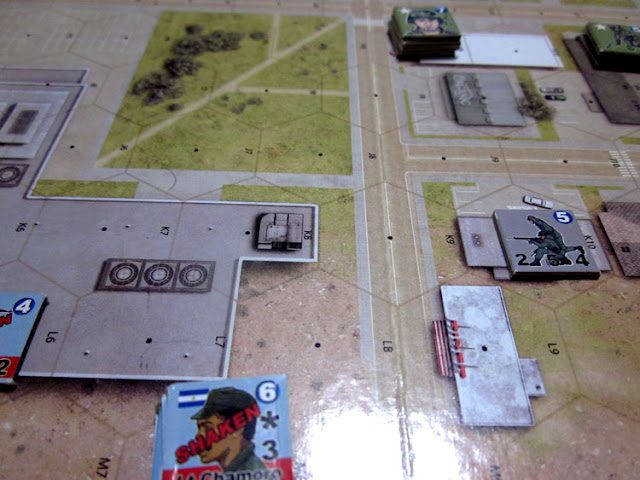 Finally, Maj. Petrov and his men (along with hero Drago) have made their way to the bungalow across the street from the National Guard installation. 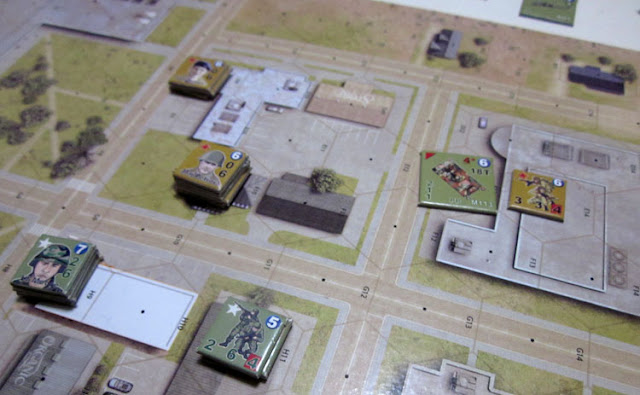 The M113 pivots again, this time to fire at the adjacent Spetsnaz squad.  Unfortuanately for it, however, the Spetsnaz manage to shake it up as they pour fire on the exposed crew.  The APC buttons up and hopes for the best. 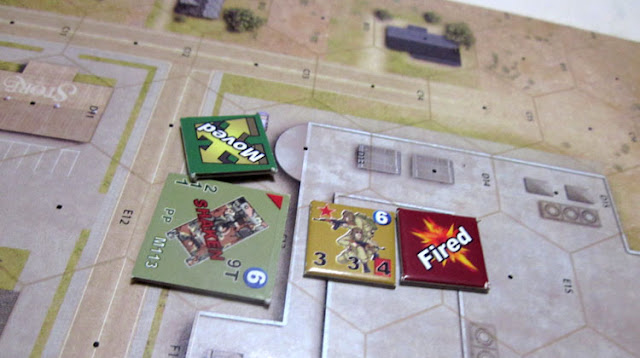 Maj. Petrov sends Drago out on the next turn to assault the US position.  The Americans hammer on poor Drago as he crosses the street, even firing 40mm grenades at him.  Only his “Lucky Man” card manages to keep him from being killed. 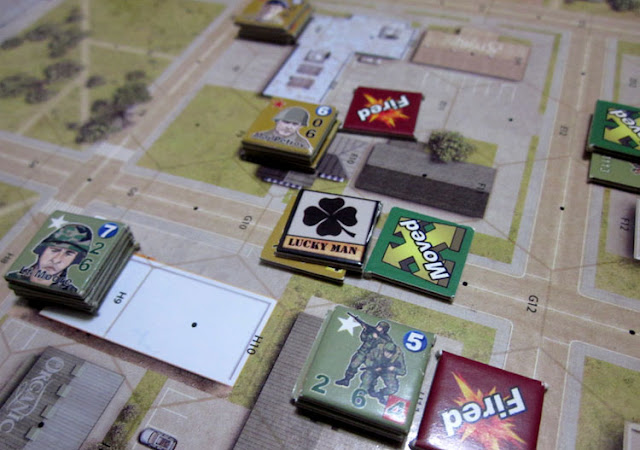 On the next turn, the wounded Drago gets to his feet and makes his way into the building with the Americans. A fierce melee ensues and, amid the confusion, both Drago and the US squad are eliminated. 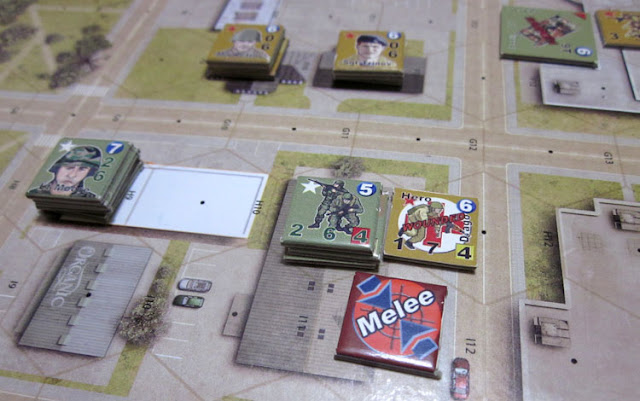 Maj. Petrov follows up with an assault but Lt. Moore wipes out most of the Spetsnaz squad as it nears the building. 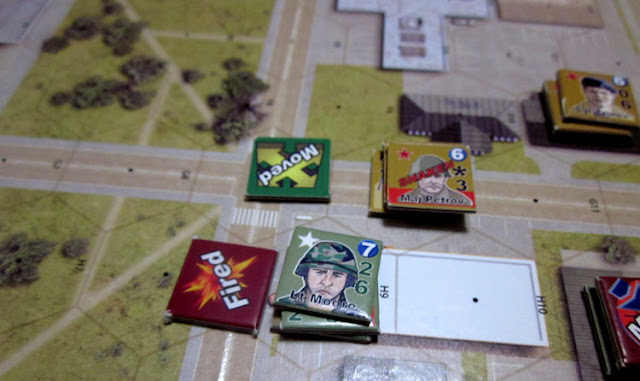 This does not stop Sgt. Trinov, however, who sneaks into the building during the confusion and enters close range melee with the Americans.  Trinov and his Spetsnaz quickly eliminate the Americans and the first objective is taken.  All that stands between victory is the police station. With only two turns left in the game, however, time is short. 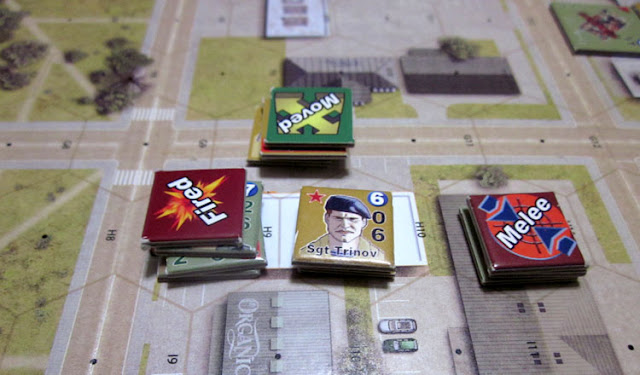 With no time left to lose, Lt. Chamoro charges the police station head on and loses two squads in the process. Hoping for a miracle that never came, Chamoro lays wounded and sprawled near the parking lot. 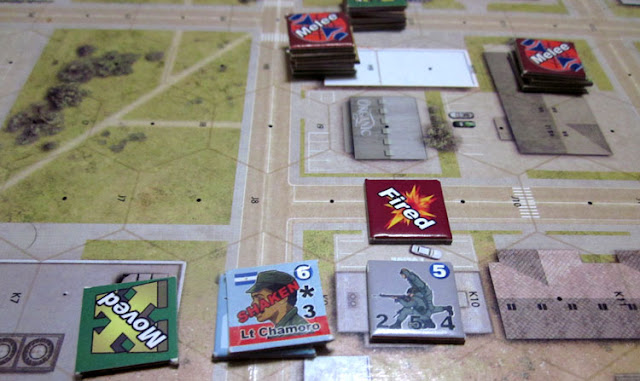 Sgt. Trinov and his men spend the second last turn double-timing down to the police station and get more of the same.  Unfortunately for the Americans, a Soviet hero is created, Yuri.

And on the last turn, the Soviets win initiative. Yuri rallies the shaken Spetsnaz squad and they enter melee with the adjacent Americans in the police station.  The US player eliminates the Spetsnaz squad but the civilians and police are killed as well.  All that’s left to claim the second Soviet objective is Drago. 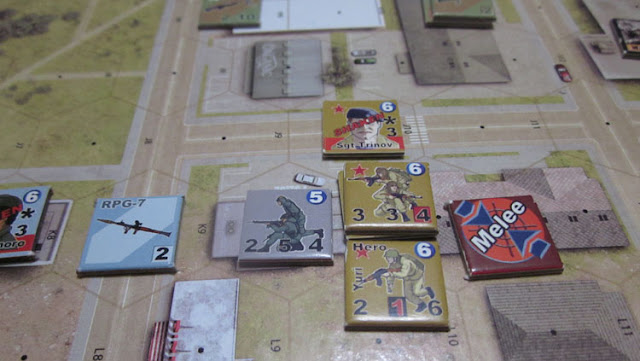 Turn 7 is over and the Soviets hold Chaparalle Falls, Texas. 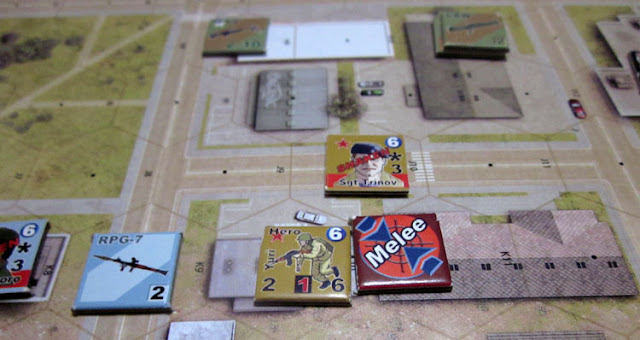 After tweaking this one for a long time, I think I’ve found a sort of balance with it.  My original scenario had US and Soviet tanks in the mix but it never seemed to come out right.  This is one of those scenarios where it looks at first like the Americans are simply going to be overwhelmed by numbers and melee firepower but there are several factors that serve to balance this out.  First, the US has fewer squads but much more firepower in their Army National Guard squads (an M-60, LAW, and 2 40mm grenade launchers).  Second, the M113 APC adds some advantage for the US if you can keep it away from the Soviet player’s squads (obviously I didn’t do a good job of this in the above playthrough).  Finally, the AH-1 helo is one of those wildcards that can show up to help the US a bit.

I think the key here for the Americans is not to sit around with the Army National Guard and to use their Assault Movement to catch the Soviets as they move around town or to fall back and give up defending the H9 objective in favor of working with the police and civvies to defend the police station.  For the Soviets, it’s essential to stay indoors and it couldn’t hurt to have the Nicaraguans and Spetsnaz link up for joint assaults on one American objective at a time.  Since the Nicaraguans can enter any hex on the west side of the map, it would have been just as easy to have them enter in the northern part of the map and use them to help push for the H9 objective.