Setting up Phase Line Smash took the better part of an evening and I started to get really excited about playing the game.  I’m bound to make some mistakes but here’s what I’ve already learned just from the setup.

1.)  This game is gonna be on your table/floor for a few days so keep it somewhere safe.
2.)  Use the Holding boxes for the Coalition units.  Huge stacks of brigades are difficult to sort through on the map at setup.
3.)  Some of the engineer units for the Coalition forces have only the corps set as the parent unit.  I believe these can be attached to any US division or can be left as corps level units.

Once the game is setup, it looks pretty impressive. 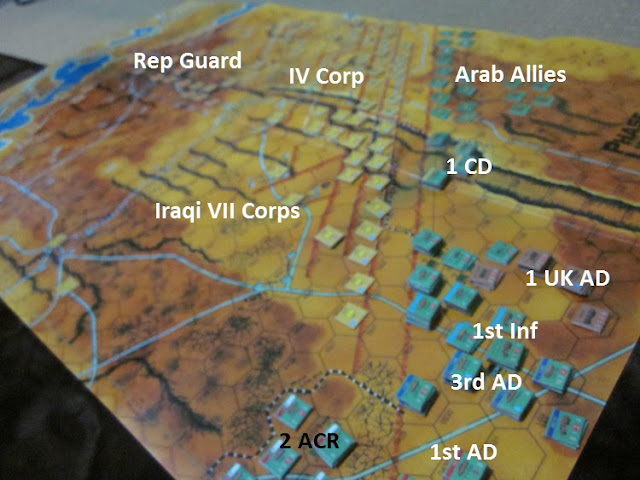 Since I’m new to the game and I have no idea what I’m doing yet, I’ve decided to just throw myself in here and see how it works.

First up is the weather phase, which is skipped for the first turn in the historical scenario.  It’s the afternoon of Feb. 24th, 1991 and the weather is overcast.

Next is the Command Phase.  I set up my Tac Air for the turn and I have 8 F-16 units and 8 A-10s.  The Arab Allies are a little short on airpower with only the Free Kuwait A-4 Skyhawks and the Saudi Hawk 65 attack trainers.  I decide to beef up the Arabs with 3 A-10s and assign the rest of the air power to VII Corps.  I worry that I’ve been too cheap and have doomed the Egyptians from the start.

We get 12 disruptions of Iraqi units due to massive Coalition airpower.  I decide to hit the border units hard so as to pave the way into Iraq and Kuwait.  I disrupt 6 units of the Iraqi IV Corps (30th and 16th Division) in Kuwait just north of the Egyptians and the JFCN forces.

To the west, I hit the artillery and infantry of the 26th and 48th Iraqi divisions,  which should ease the passage of the 1st Infantry and 1st UK Armored Division.

After all this, the VII Corps still has 6 Command Points left!  It’s time to go shopping:  Since the order of units for conducting operations is determined by chit pull, I decide to keep the VII Corps chit out of the cup (1 CP) and the Egyptian chit as well (2 CP).  Half my CPs are still available for the operations phase.  US VII Corps will go first, followed by the Egyptians.

Operations Phase:  Okay, let’s go! I’m going to start off with some Tac Air to soften up the Iraqis a bit more.  A couple of things about Tac Air are apparently:

1.)  It’s easy to disrupt enemy units using Tac Air.  It’s hard to kill the enemy with Tac Air unless you commit a lot of air assets to do the job.

2.)  A-10s are wonderful for Tac Air.  F-16s aren’t so great.  It seems that the best balance may be to use F-16s to disrupt enemy units and groups of A-10s to kill anything that you really want taken out of the game.  Use any remaining A-10s to combine with helicopters to great effect.

Keeping this in mind, I send the F-16s out to disrupt Iraqi units along the border, successfully hitting the front line units sitting in front of the 1st Cavalry Division.  The 25th division of the Iraqi VII Corps is hurt and there is not a single fully functioning Iraqi division along the Iraq border.

I have a special mission for four A-10s and I send them to hit at the Iraqi armored division and towed artillery of the 52nd division, which are just a bit further back from the front line..  Sitting on the road and already disrupted by earlier Coalition air strikes, the A-10s wipe out the artillery and disrupt the armored division.  Unfortunately, the 2 column shift for Tac Air vs. armor helps blunt the attack and turns an “E” (Eliminated) result into a “DD” result (Disrupted, if already disrupted then eliminated).  I should have combined helos with the A-10s to reduce the column shifts.

Just to see how well the Apaches and Warthogs work together, I send out the 4-2 Air Cav from the 2nd ACR and order them to perform a joint strike with the A-10s on the 48th division infantry and artillery sitting just behind the front line Iraqi infantry.  The infantry and the artillery are completely wiped out in one fell swoop.  I would say the helos and the ‘hogs worked together pretty darn well.

I think that’s enough for one night.  Tomorrow, I’ll be starting the ground war in earnest as I move out VII Corps maneuver units.  Any experienced PLS players feel free to let me know if you see any mistakes.  Given the rules, it’s possible I did all of this wrong…but I had a really good time anyways.

Here’s a look at our theater at the end of all this air activity: