This marks my 100th post on this blog and I thought for a long while about how to make it a little special.  The first wargame I ever bought was World at War: Eisenbach Gap and “First Moves” was the first scenario I ever played and for that reason, among others, it remains one of my favorite scenarios to haul out after a long day at work.  I’m not sure what it is about this scenario that keeps calling me back but it could be the beautiful simplicity of it, the raw power of T-72s vs. M1 Abrams tanks or the fact that it’s the very first step into the World at War universe.

In any case, I do remember doing a very short AAR of this scenario a while back and I’ve always thought that it deserved better.  So here it is – a fully detailed AAR of First Moves for Eisenbach Gap.

American Setup:  I put the two Abrams platoons back on the hill south of Eisenbach while the infantry goes way back into the city to avoid it getting pulverized from Soviet artillery.  The ITV is there more as a hope than a real threat. 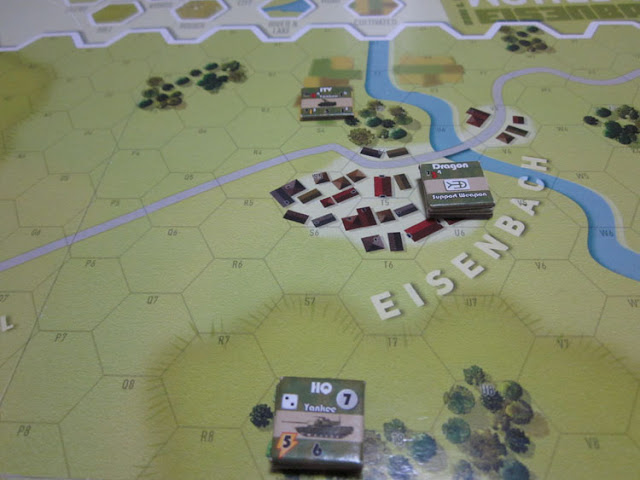 The Soviets set up on the other side of the board to the west and they get first impulse.  Yahoo! 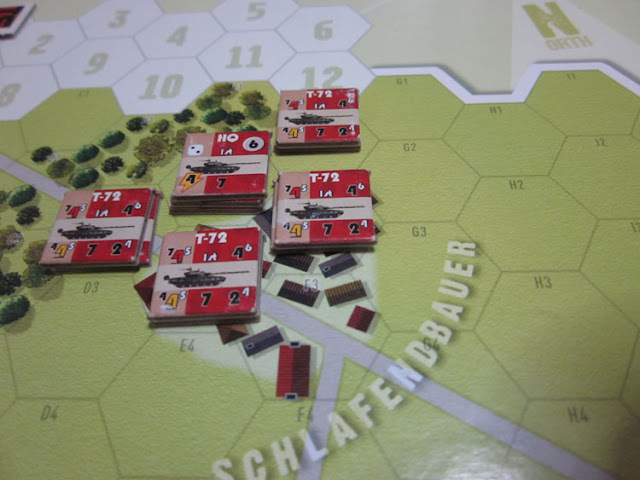 So the Soviet T-72s moved out to nearest hill, taking cover from American opp fire. 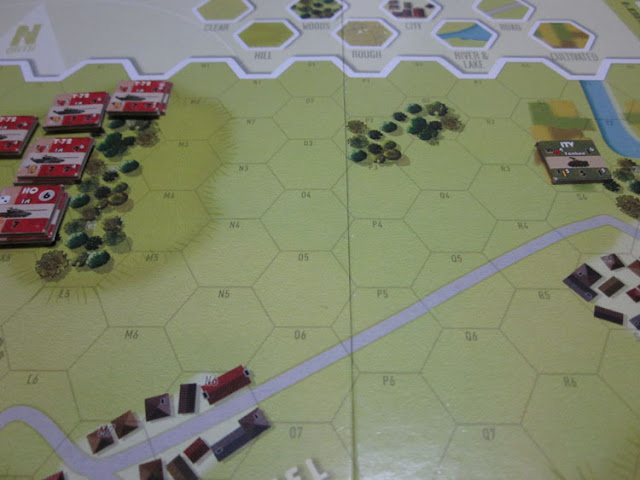 Lucky for the Russians, they pulled their chit and activated twice in a row.  It was off to Eisenbach they went!  Unfortunately, one platoon got massacred by an Abrams platoon as it reached the hill crest. 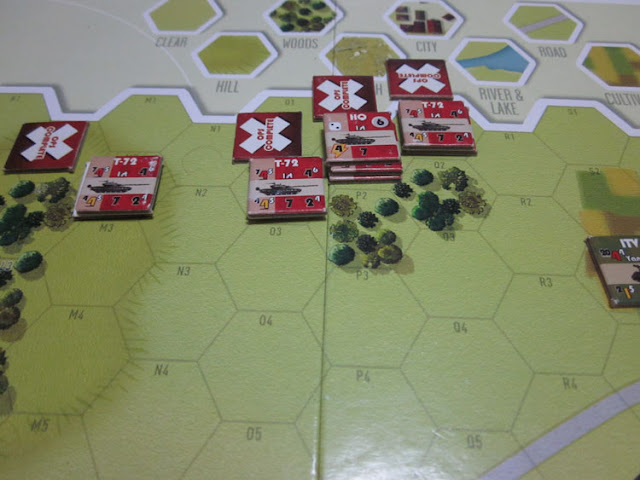 And although another platoon got destroyed by the American ITV while capturing Bergengipfel, these were acceptable losses for the Soviet commander.  The first objective was completed. 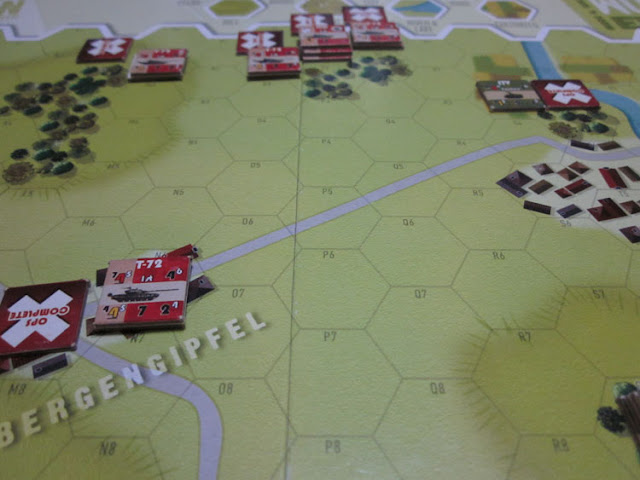 The first turn ended with no American activations and the Soviets danger close to Eisenbach.  Things were looking up for the Warsaw Pact.

The US activated first in the turn.  The ITV outside of Eisenbach fired at the nearest T-72s but the fire was completely ineffective. 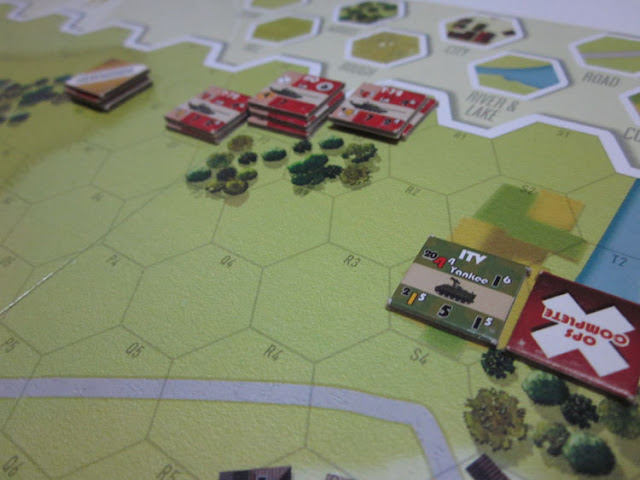 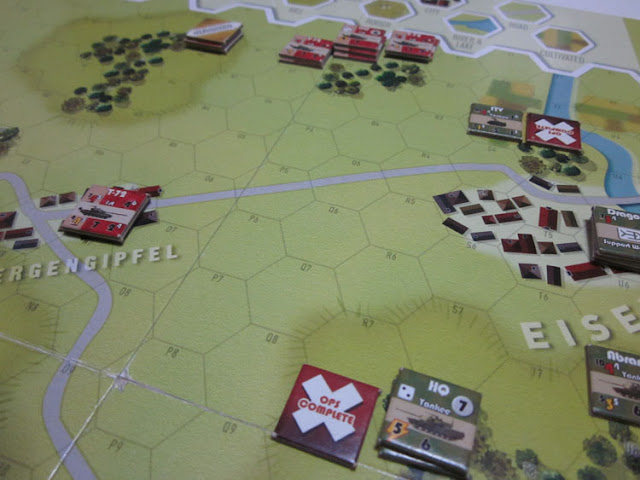 Meanwhile, the other Abrams platoon shifted towards the edge of the hill, hoping to find another field of fire. 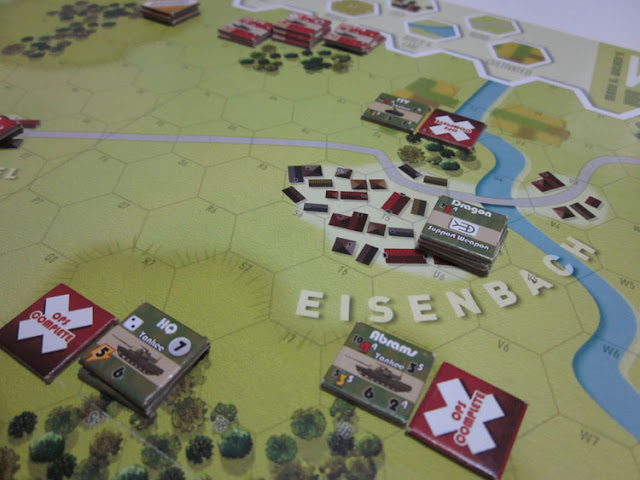 Too bad for the Americans, the 1st Guards Tank Division activated and immediately pushed towards the city of Eisenbach.  Two platoons of T-72s completely obliterated Yankee’s ITV without taking any casualties. 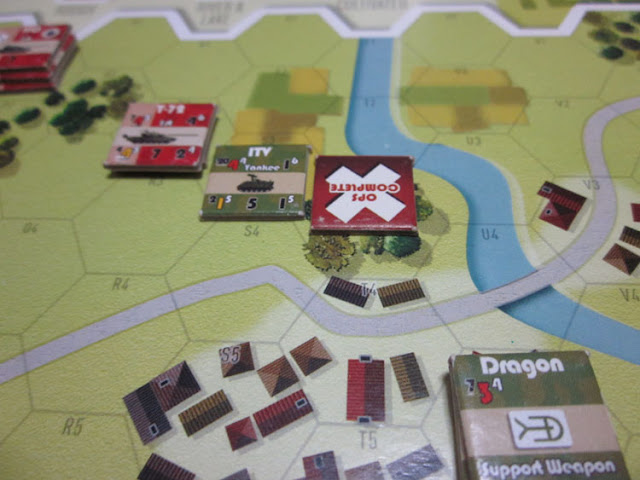 The Soviet commander pushed another several tank platoons into the city and assaults the US infantry, getting badly hurt in the process with one platoon in T4 eliminated and the other reduced.  The Soviet HQ and tank platoons ended up moving to hex S4 just outside the city to help back up next turn’s assault.  Surely a single platoon of infantry couldn’t stop half a dozen T-72 platoons! 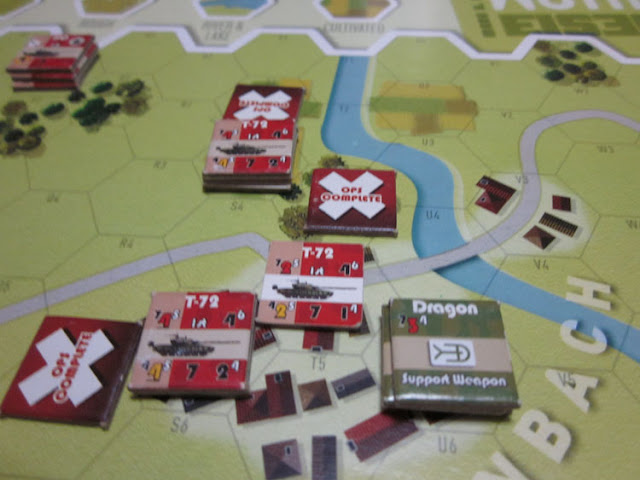 Yankee activates first and immediately puts the hurt on the Americans, destroying the remaining Soviet tank platoon in T4. The American commander decided that there was strength in numbers… 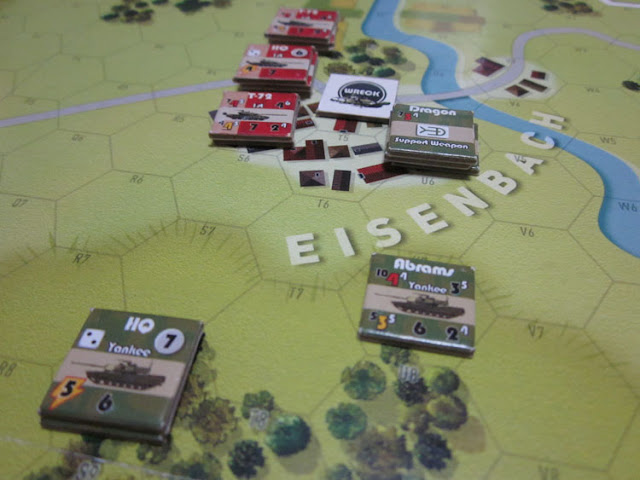 and moved his HQ and Abrams tank platoon to join up with the other Abrams tanks sitting in U7. 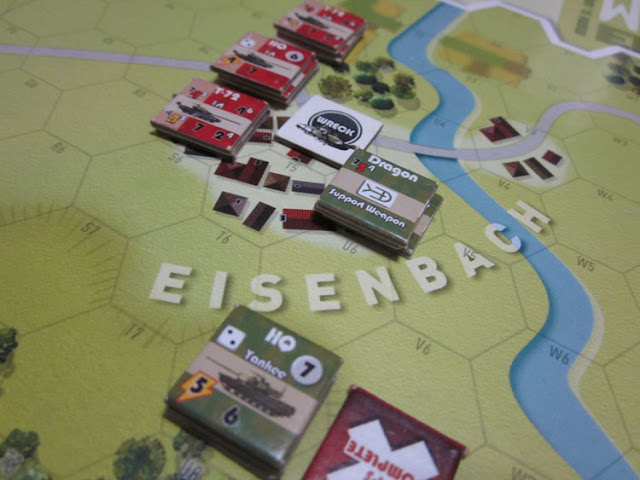 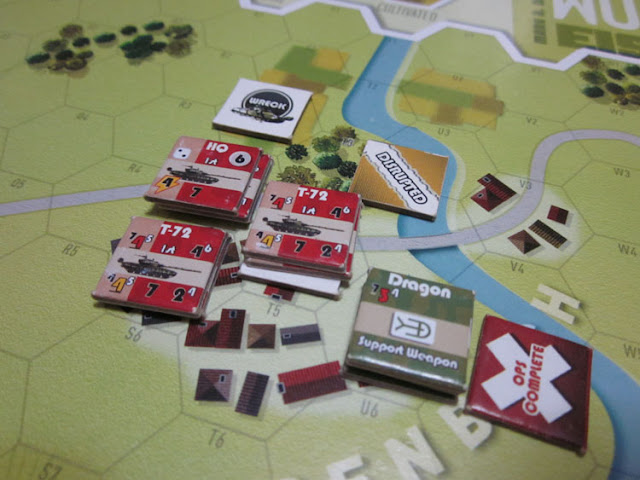 Two more platoons moved through the south of the city and came under opportunity fire from one of Yankee’s Abrams platoons on the southern hill. 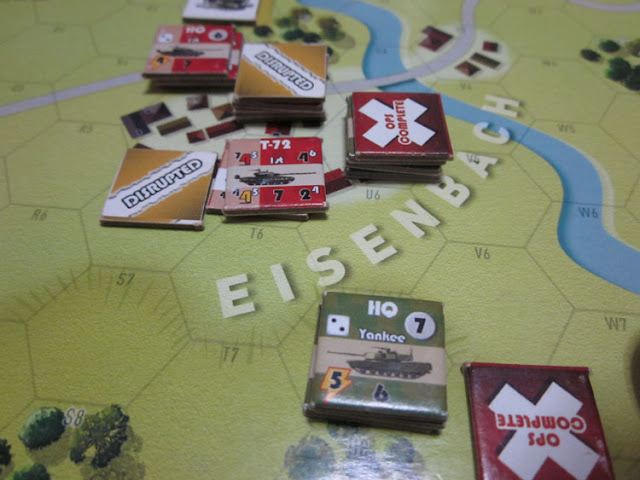 One T-72 platoon was reduced and the other decided to go with a fake and hit at the American HQ instead.  The assault went poorly and the T-72s were completely destroyed.  Yankee took no casualties. 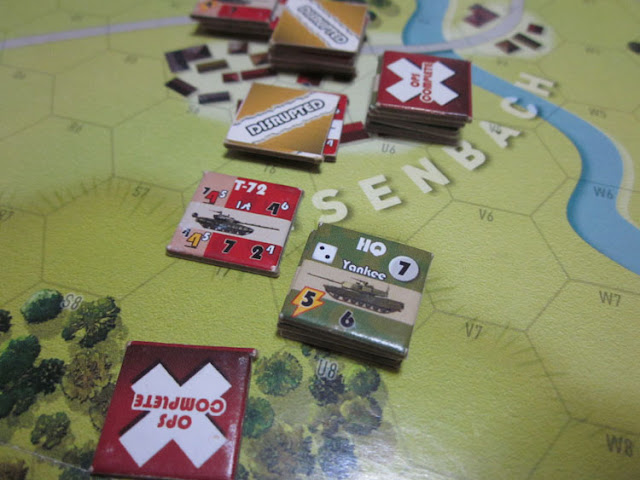 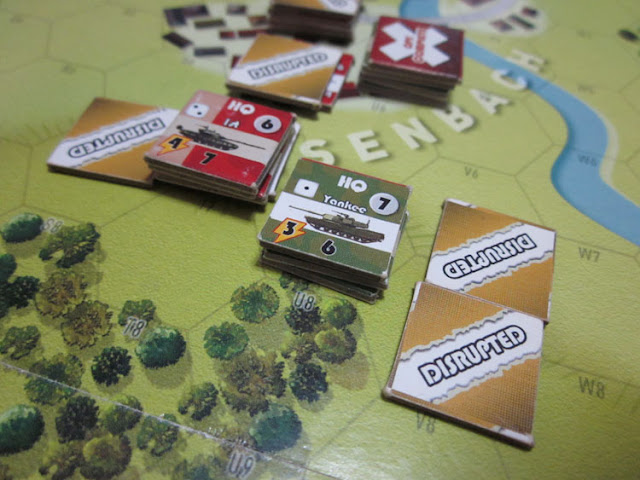 Yankee got the final activation of turn 3 and although it failed to rally its disruptedAbrams, the infantry in Eisenbach crushed the adjacent T-72 platoons.  Somehow the Soviet fortunes had swiftly soured. 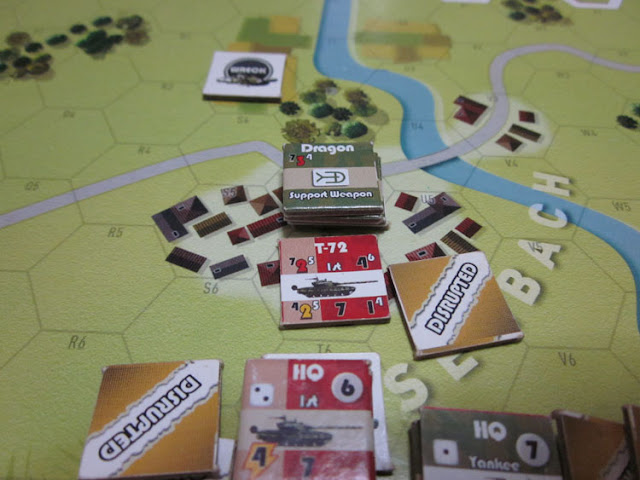 Yankee activated first and still had no luck rallying its Abrams platoons.  The US infantry, however, moved south and took out the remaining Soviet tank platoon sitting in the city. 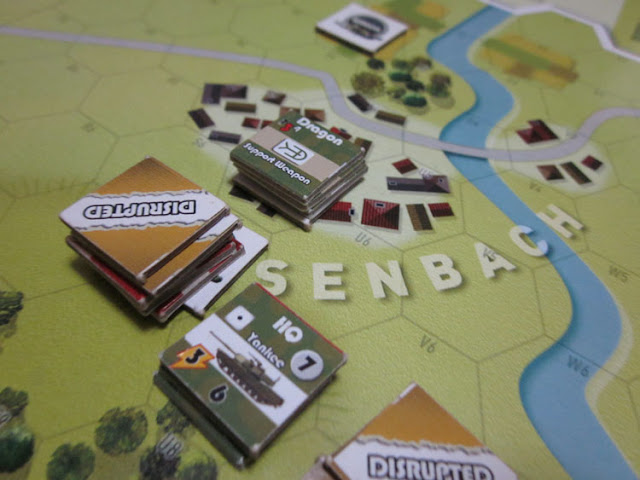 Tough luck for the Russians.  Yankee activates again, the Abrams rally and they assault the adjacent Soviet tanks.  Since the Russians are disrupted, they can only hit on a “6” in assault.  On the other hand, the Americans are at full strength. 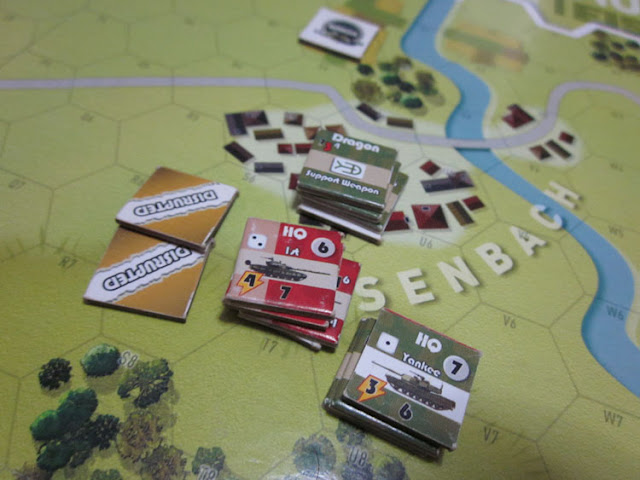 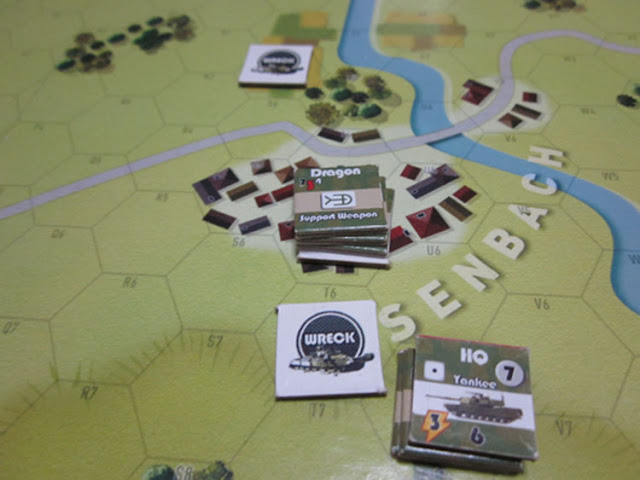 Turn 4 and the game is already over.  I don’t think I can blame this one on the chit pulls or luck.

I think this AAR demonstrates just how bad of an idea it is to send AFVs into a city with undisrupted infantry there.  Also, you can see the danger of splitting your objectives when you only have a limited force.  The Soviet player rushed into Eisenbach despite having lots of time to achieve his goals. It would have been much better to line up the HQ and pour artillery on the infantry and then assault the city or to have just gone around the city, eliminate the US HQ and then leisurely take Eisenbach…but one or the other!  What’s really interesting is how you can see the Soviets basically winning the game in the first couple of turns due to repeated activation and smart positioning but by the end of turn 3, everything went to hell because the armor rushed into the city without any support.

As an aside, I’d like to say a big thanks to everyone for reading and supporting this blog.  There have been times when I wondered if it was really worth it but the comments and Facebook likes as well as the traffic have really kept it going. Thank you!