“Southern Thrust” is the name of scenario 3 for “Dawn’s Early Light”, LnLP’s brigade-level combat game set in the World at War universe where the Soviets are rolling through West Germany in 1985.

In “Southern Thrust”, the NATO forces, consisting of the US 5th Armored Division the 4th Canadian Mechanized Brigade Group (4CMBG), are harassing the Soviets on their southern flank in the Eisenbach gap as the Soviets push through towards the Rhine and on towards France and world domination.  The Soviet 33rd Motorized Division and the 1st Guards Tank Army are sent to take care of these pesky varmints and have a few objectives to complete on the way.

The Warsaw Pact forces start north of row M on the map while NATO sets up south of row I for a classic north-south battle where the Soviets will try to capture Eisenbach along with any three  of four cities to the west of it.  If they can inflict some serious losses on the NATO units along the way and preserve their own force, they can earn some extra VPs.  The Soviets also need to keep hold of Stahlhammer AFB, which they captured on their initial push through the gap.

Both sides start out feeling the pressure.  The scenario is only two days long, which puts the pressure on the Soviets to move fast and get quick results while NATO has only limited resources to deal with the Soviet push south.  The fact that both sides start with a reduced number of armor brigades doesn’t make it any easier for either side.

I’d like to look here at a few possible set up options for NATO and the Soviets.  Since the NATO forces must set up first, I’ll look at them. 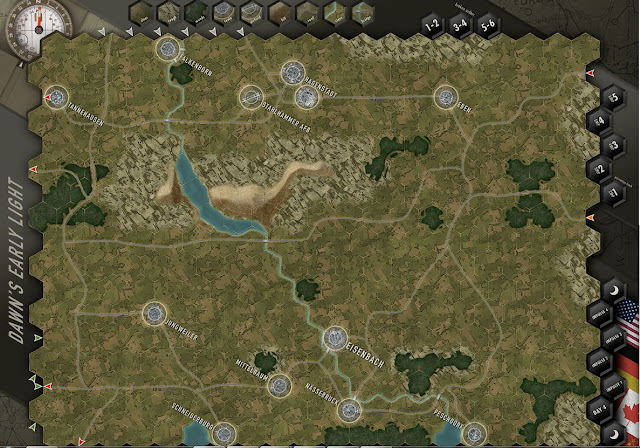 With limited resources to start out with, the NATO player has to be a bit crafty and play the odds that the Soviets are going to try a two pronged approach from the south to try for both Eisenbach and the four cities west of the river near Eisenbach. 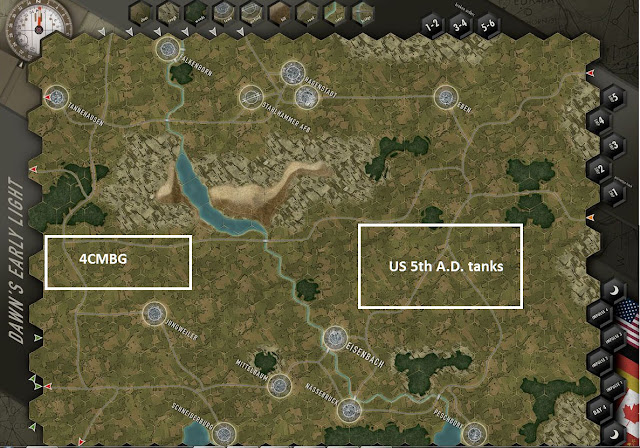 A basic NATO setup that might work is to just set the 4CMBG to the west and the armor of the US 5th on the right flank, stack some infantry in the cities and hope for the best.  This isn’t a bad strategy and it has worked for me on occasion.  The problems with this setup are twofold:

1.)  The 4CMBG will probably be crushed by the Soviets rather quickly.  With only three units (albeit with tough infantry), the Soviets will probably apply enough pressure to come down through the forest and rough hexes, overwhelm one or two Canadian combat elements and then saunter down to capture the cities to the east of the river.  They will probably also send a nice little force to the southwest in order to stall or block your reinforcements from arriving in a timely manner.

2.)  The US 5th Armoroed Division tanks will probably fall and even if they don’t, it really doesn’t matter.  There is enough open ground south of hex I to tear a a pile of brigades down towards Eisenbach and take it while the rest of the Soviets in 1GT tie up the remaining American tanks.

The beauty of this setup for the Soviet player is that he/she doesn’t need both plans to necessarily work.  If one fork succeeds in its push towards its goals, it will apply enormous pressure on the NATO forces on the other flank.

So how about an alternate setup? 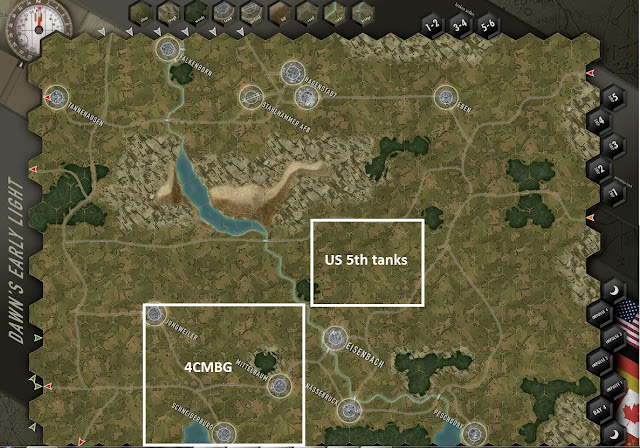 I find that the above setup, although not ideal, is much more realistic for the NATO player and provides a much greater chance of preventing the Soviets from achieving their goals.

First off, the Canadians are set much further back in a defensive position that centers around three cities, Jungweiler, Mittelbaum, and Schneiderberg.  With the road network that exists between the cities, the infantry and tank forces can move much faster to block approaching Soviets and reinforce cities where NATO resistance is crumbling.  Keeping the two very tough Canadian infantry brigades in closed defensive city terrain certainly makes the Soviets’ job much harder.  The Canadian tank unit can be used to move up quickly on the roads and strike at isolated Soviet units.  To make up for the Canadian lack of numbers on the left flank, I usually direct any airstrike or gunship assets to this side of the board.

On the right flank, the US 5th has set up next to the river, keeping the door wide open for the Soviet tank forces to rush at Eisenbach.  The plan here is simple.  The Americans will let the Soviets approach the beleagured city and then rush at their forces, closing the gate in the process.  The Soviets have a major disadvantage when attacking Eisenbach, which is the difficulty in surrounding it due to the river.  The Americans have purposefully set up near a bridge to block Soviet access to the western bank, forcing them to take a bad approach to assaulting Eisenbach.  While the Soviet forces pile up on the east bank, the US will send its M1s to hurt vulnerable units.

By using movement, defensive terrain, and smart use of assets, the NATO player will have a much better chance of keeping the two prongs of the Soviet attack from linking up by using this setup rather than the more obvious (but highly vulnerable) “forward defense” setup proposed in the first part of this article.  Next up, I’ll examine the Soviet setup options!