With the recent Disney purchase of Lucasfilm and the announcement of new Star Wars sequels on the way in 2015, I thought I would take a little break from modern warfare to have a little fun in a galaxy far far away.  Star Wars Miniatures was a Wizards of the Coast collectible miniatures game released in 2004 and discontinued in 2010.  when WotC let the license go, much to the disappointment of the game’s small but loyal fan base.  I don’t play miniatures games very often but they’re fun to haul out once in a while and I feel the need to mercilessly occupy some serious real estate in our tiny apartment for the better part of a day.

Anyway, without further ado, here’s an AAR of a Star Wars Miniatures Hoth Battle.  I used figures from the base set, the “Battle for Hoth” expansion, and the booster packs to create a simple scenario.

I start out purchasing 160 point armies for both the Rebels and Imperials  That makes this a medium-size skirmish.  Faced with the choice of buying really big powerful stuff or lots of little things, I decided for a mix. 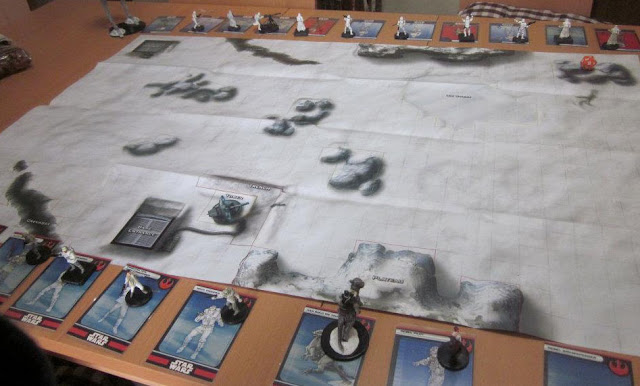 The Rebel Alliance had lots of ground troops, Leia, Han, and a nice snowspeeder to help it out. 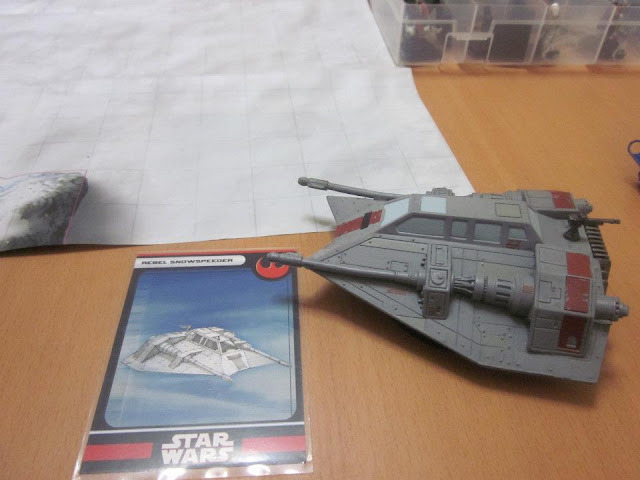 The Empire went with an AT-ST trooper from “Blizzard One” task force, along with heavy e-blaster and a ton of snowtroopers to carry through with the main assault.  The Empire’s objective was to find and enter the hidden Rebel base while the Rebels tried to hold them off for six turns. 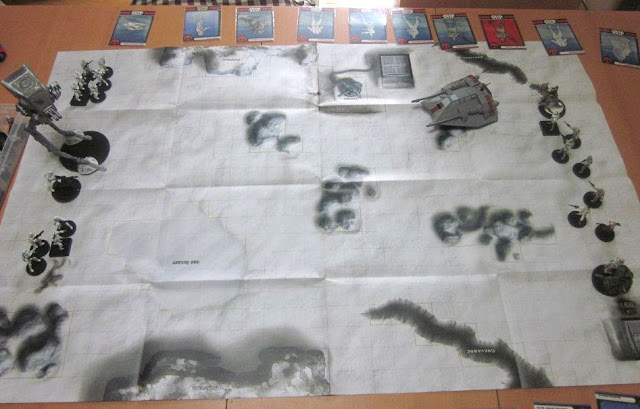 The Rebels started off big, sending off their snowspeeder to hit at the AT-ST.   On its first pass, the snowspeeder missed with both shots and the AT-ST immediately shot it down with a die roll of 20.  The first turn was not even finished and the Rebels had lost 1/3 of the points from their forces. 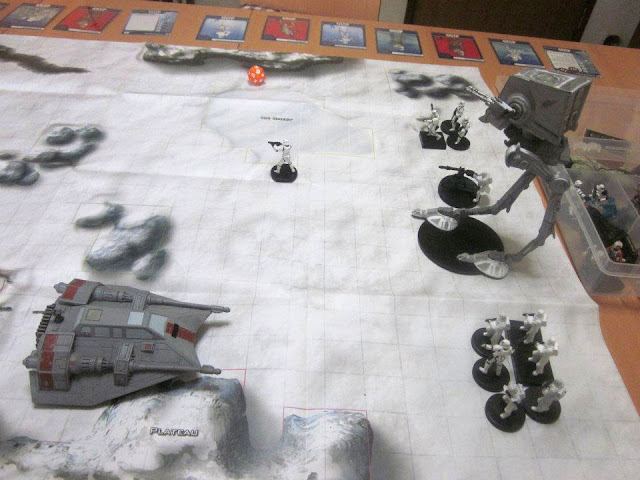 It was time for the Imperials to rush their troops forward.  Two squads of snowtroopers rushed towards the base entrance, firing at anything that moved. 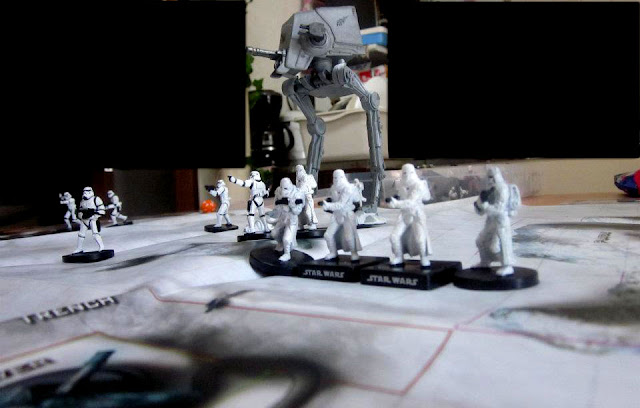 By the end of the first turn, the Imperials had covered half the ground they needed in order to reach the Rebel base entrance. 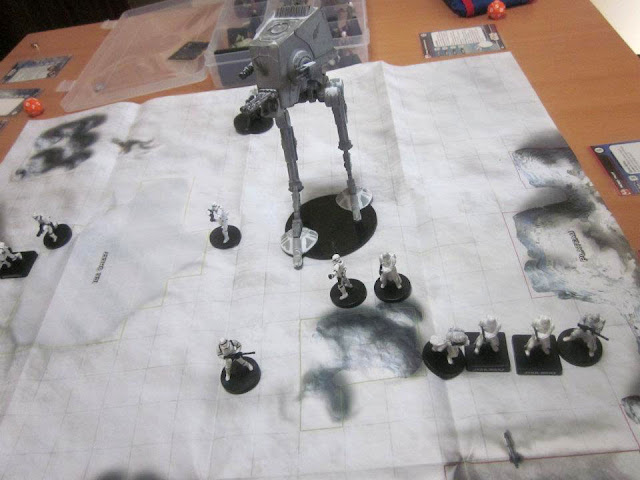 Not to be defeated so quickly, the Rebels took up positions behind cover and waited to ambush the oncoming Imperials.

The two sides converged around several rocky outcroppings.  Blaster fire filled the air.  Stormtroopers started dying.  The Rebels let loose with their anti-vehicle cannon in the rear, damaging but not destroying the AT-ST that clanked towards them. 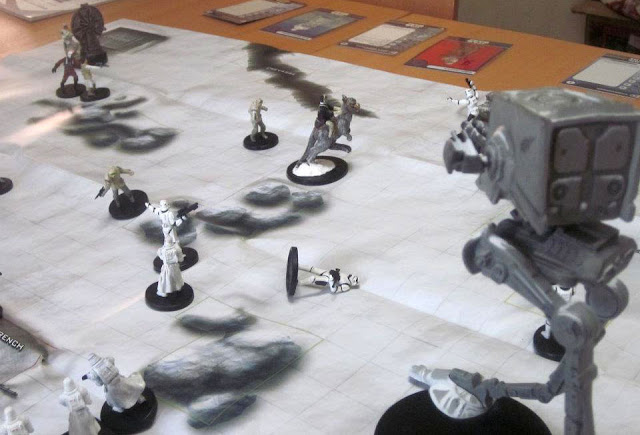 Han Solo, riding a tauntaun in the center of the map, picked off a couple of stormtroopers as they rushed by. 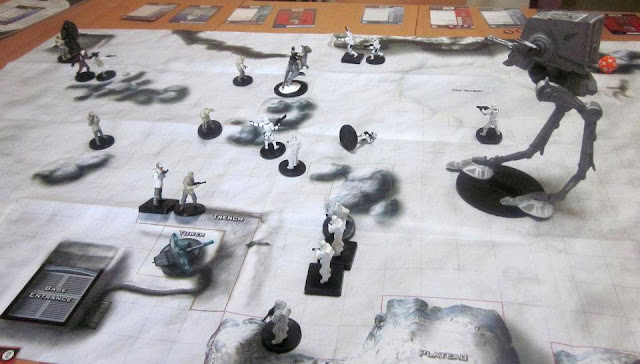 Two rebels leapt into the trench near one of the base entrances and started returning fire against the oncoming squad of snowtroopers. 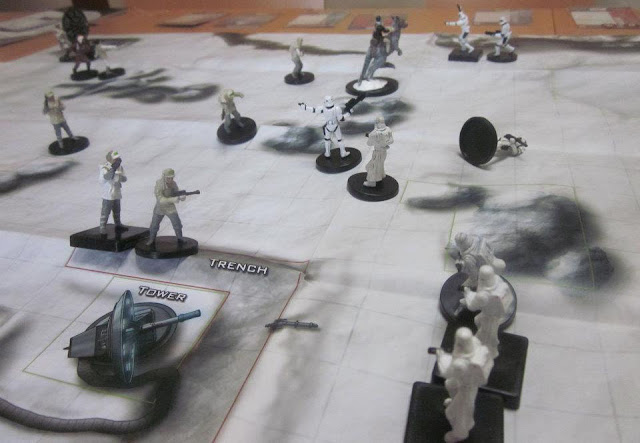 The Rebels in the trench take out one of the snowtroopers while Han takes out two stormtroopers on the other side of the map. 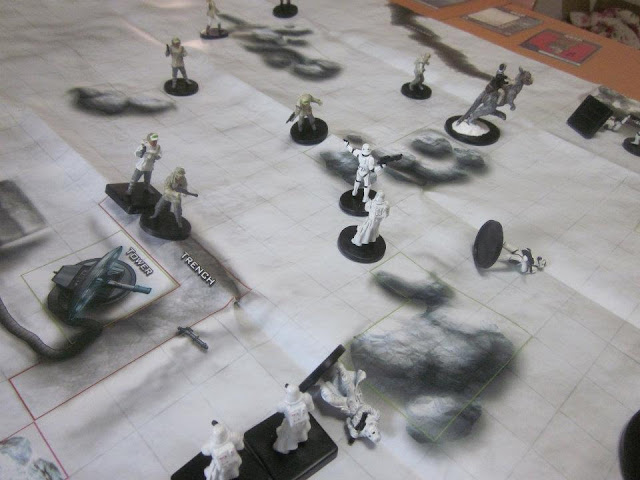 The trench provides great protection from Imperial fire and another rebel soldier jumps in and helps deliver heavy fire at the snowtroopers.  It’s turning into a bloodbath on the Imperial left flank! 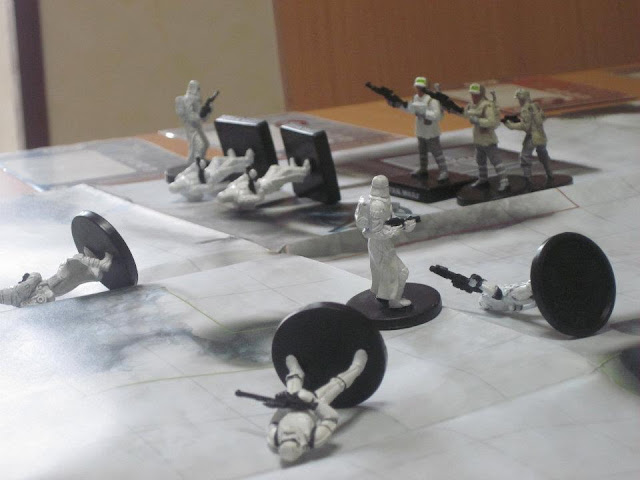 The AT-ST starts picking off rebels.  Han Solo is taken out by a barrage of fire from the AT-ST’s linked cannons.  As a Star Wars fan, it hurts just to write that sentence! 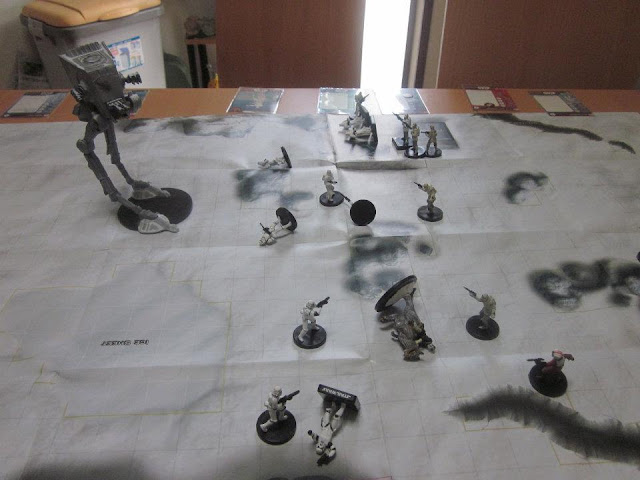 On the next turn, the AT-ST turns it’s attention on the Rebel troopers in the trench to its left.  At this point, it is simply a death-dealing machine.  Unfortunately, the Imperials do not have the numbers to follow up with any assault on the base entrance.  The Rebels have been very effective with their ambushes and deadly accurate with their fire.  Dead snowtroopers and stormtroopers litter the battlefield. 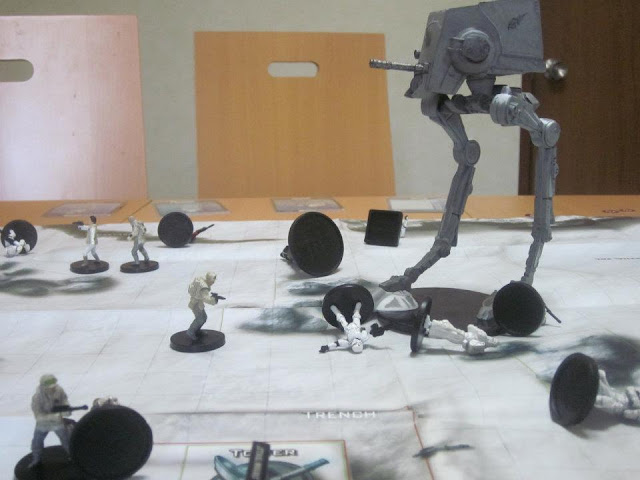 On the remaining turn, two remaining stormtroopers make a dash for the base entrance near the edge of the map but they are killed by Leia and a rebel trooper.  The game ends after the sixth turn and the Rebels have just managed to hang on. 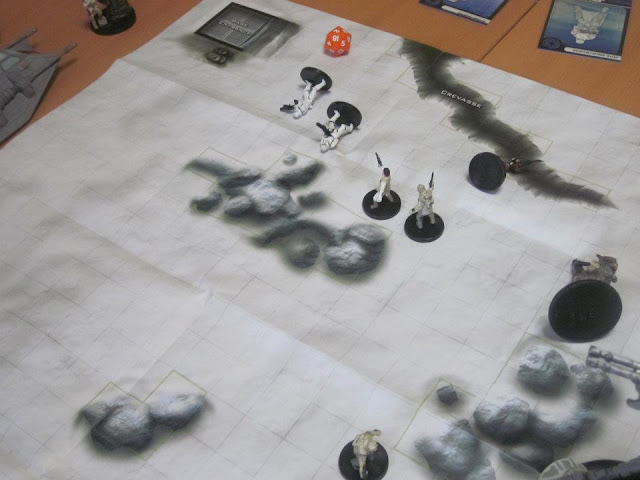 Conclusion:  The AT-ST was very effective in solving the big problems (Rebel snowspeeder and Han) but trying to use it on the Rebel troopers was like trying to hit a fly with a sledgehammer.  Leia’s special ability is that non-unique characters (i.e. “cannon fodder”) that are killed get a chance to re-enter battle again on the next turn with a roll of 16+.  This basically saved the day for the Rebels as they could get guys back into the fight as fast as they were taken out.

The lack of any special leader for the snowtroopers or stormtroopers (save for officers who got picked off right away by Rebel ambushes) meant that the Imperials could only shove guys at the Rebels and hope for a lucky break on one of the flanks, which never happened.  Given a second shot at this scenario, I would choose Vader instead of an AT-ST, which gives considerable benefits to the stormtroopers and snowtroopers.  Vader’s force powers are also impressive and would have been able to take out the big stuff just as effectively as the AT-ST.