Going through some of my back issues of LnLP’s Line of Fire magazine, I found a little gem that I had missed the first time around and decided to give it a go.  “Fiery Baptism” is a scenario that takes place in Algiers in 1943 at the start of Operation Torch, the British-American invasion of North Africa.

Despite their attempts to covertly contact the French commanders in the region and request they join the Allies, not all the French military leaders in Algiers could be persuaded. As a result, the Americans found themselves under fire from French forces on some of the beach landing sites. “Fiery Baptism” pits the French and Americans against one another on a beautiful map included as part of the issue (which can also be used for a scenario for “Island War”). 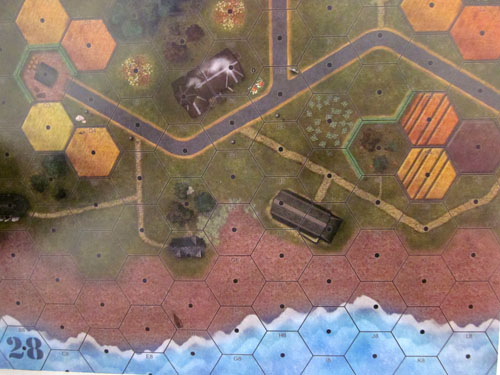 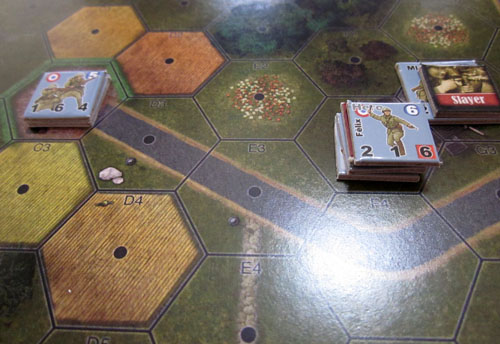 Further out on the east side of the map is Adc Decotes and a squad.  There’s not much cover here so they sit out near some low crops and await the American arrival.

The Americans make a beach landing with Lt. Lewis and several 1-6-4s on the left flank.  Captain Steel is in the middle.  The US objective is to take all the buildings on the map in six turns. 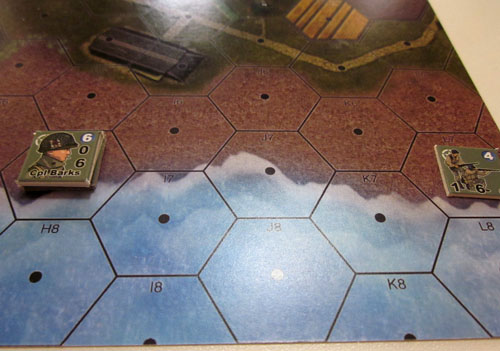 So here’s a final look at our map, positions and the general direction of intended movement over the course of the game. 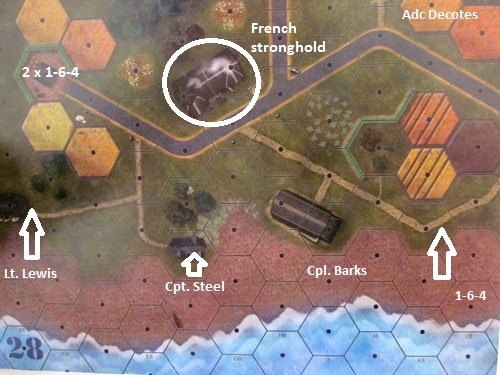 The French get initiative on the first round and the machinegun rips into Cpl Barks and his men on the beach. 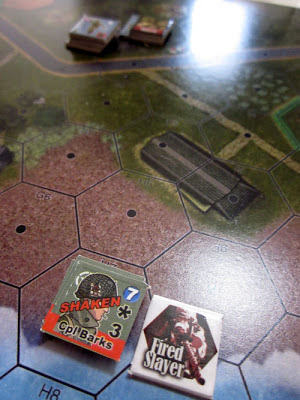 Lt. Lewis on the left flank advances up off the beach and occupies a small house. 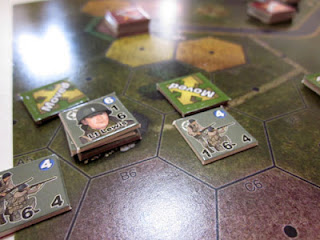 On the right flank, the lone 1-6-4 squad moves off the beach and comes under fire from Adc Decotes and his men but the Americans are unharmed. 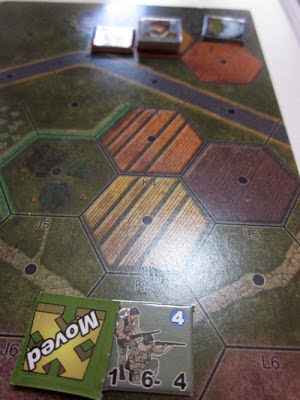 By the end of the turn, Cpt. Steel, in the center, has made it just off the beach and into a house while he advances a squad up towards the French stronghold.  A French hero, Felix, sneaks up to the American position. 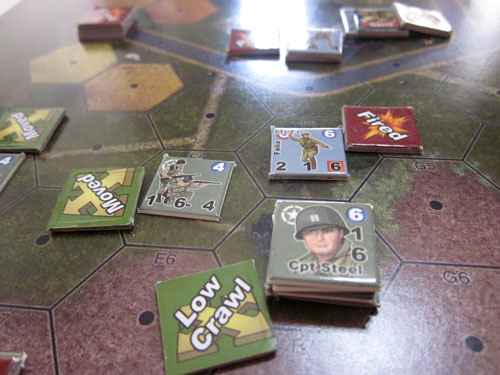 Lt. Lewis sends a squad up to a small building full of French soldiers and the Americans are eliminated. 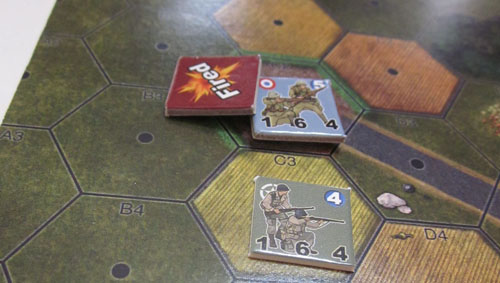 Adc. Decotes fires on the lone American squad on the right flank but only succeeds in creating a US hero! 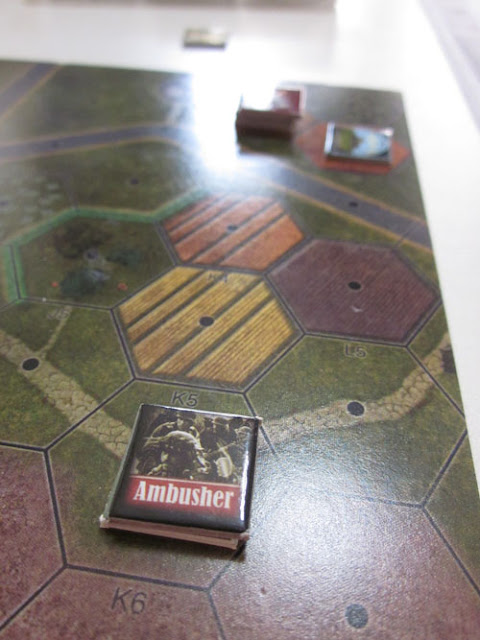 Lewis sends more men towards the house on the left flank.  Despite shaking up a squad in the house, a French hero is created, making the American job much harder. 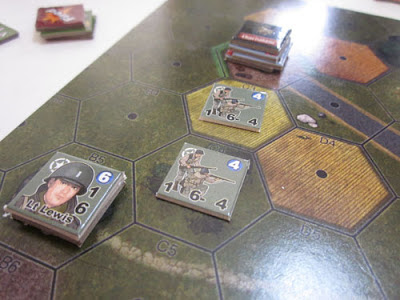 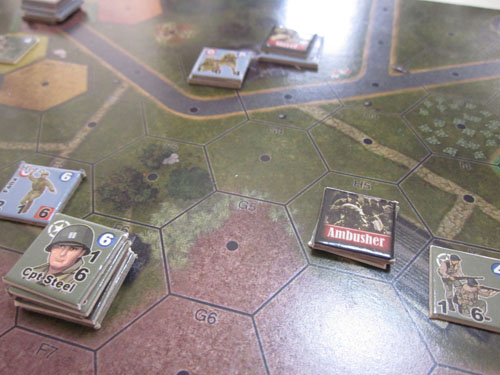 Descotes decides to try and cover the American approach to the French stronghold in the center of the board.  Over on the left flank, Lt. Lewis is trading fire fruitlessly with the French in the nearby building.  Neither side can seem to gain any advantage.  The US commander decides enough is enough on Turn 4 and melee the French troops. 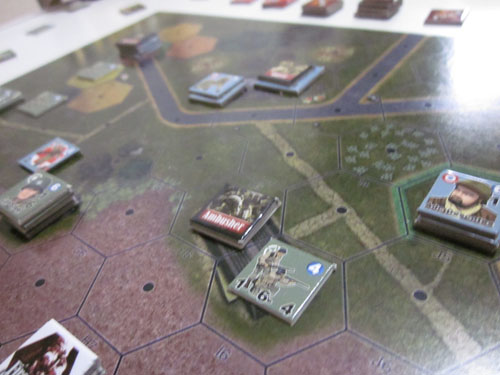 Lt. Lewis and his platoon enter the nearby building (on the left), soaking up opportunity fire from the French machinegun and the squads sitting to the right in the French stronghold.  Unharmed, Lewis and the men start to cut down the French in close quarters combat.

With no threat from opportunity fire and having eliminated the nearby French hero, Captain Steel and his platoon advance towards the French stronghold and engage in melee with the French machine gun team.

Cpl. Barks has been sitting on the beach since the beginning of the game, trying to rally his squad with no success. Disgusted, he takes the BAR automatic rifle from his shaken squad (which is actually a no-no as per the FAQ, I later found out) and advance up the beach himself. 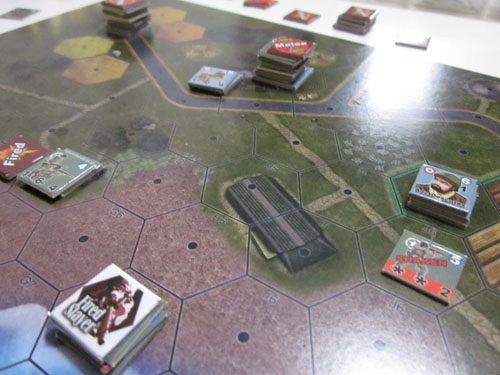 Adc Decotes sees an opportunity to take back the previously held American buildings.  He runs into the nearby building but a US .30 cal MG opens up and shakes his squad.  Cpl. Barks eliminates Adc Decotes and his men shortly thereafter. 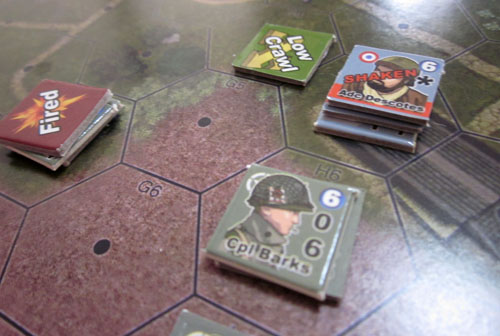 By the end of turn 6, Cpt. Steel and his men have taken the French stronghold in the center of the map. 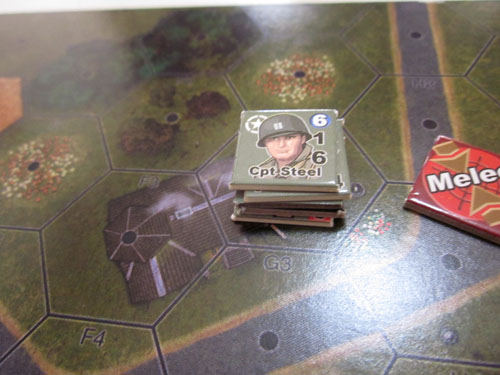 However, one French hero has managed to avoid elimination in melee at this point.  With a lone French soldier still contesting one of the buildings, the Americans lose the scenario in an agonizing defeat. 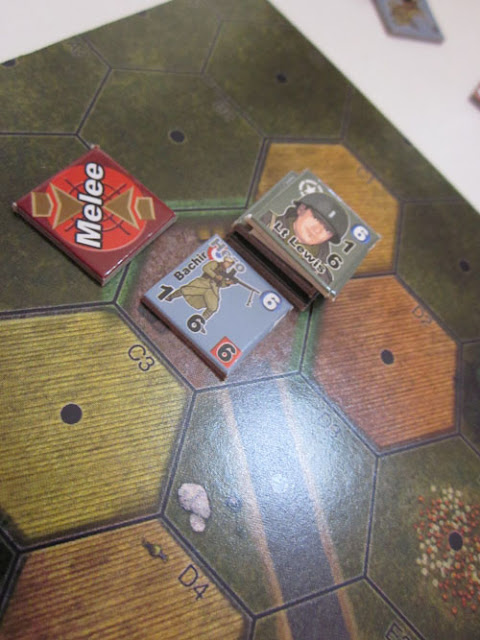