Red Backer One is a scenario from LnLP’s Heroes of the Gap which centers on a tank battle between the Soviets and Americans.  The Russians get a relatively large number of tanks to start out with.  They have 9 T-72s and a couple of ATGM vehicles perched on the hillside to the east of Eisenbach and they have to capture the city from the Americans in only six turns.  The Americans have only 3 tanks but these are M1 Abrams, deadly and highly effective at long range killing.  They also get an ATGM vehicle and a platoon of infantry for defense.

I’ve played this scenario a few times with opponents and, each time, I have lost badly as the Soviets.  After a few turns, my T-72s wrecks litter the battlefield around Eisenbach, perhaps getting a successful kill on an M1 before declaring game over.  After playing around with the scenario solo many times, I think I *may* have found the key to Soviet victory.  I’d like to look now at some possible opening moves that might help the Soviet player overcome the odds.

In order to inflict damage on the Americans and to avoid getting wiped out, the Russians need to close the distance between themselves and the M1 Abrams.  Sitting on the hill blasting away at the American tanks is probably not going to work out well due to the armor thickness of the Abrams in defense and the long range accuracy of the Abrams on offense.  So the trick here is to close the gap with the Americans, surround their tanks with large numbers of T-72s and hopefully score some rear-shot kills or at least shake up the tanks and end up with an abandon result.  The Soviets are going to lose some units in the attempt but hopefully with just a little forethought and planning, they can preserve just enough of a force to win the day.

The Setup:  Keep it Together

Setup is everything here.  The Soviet player gets one tank leader to start off, which is key to a good Soviet first turn.  A smoke artillery mission is also granted to the Soviets, which is terrific but must be used very conservatively.   Although the Soviets get a large number of tanks here, they have to be used carefully and with the capabilities of both sides in mind. 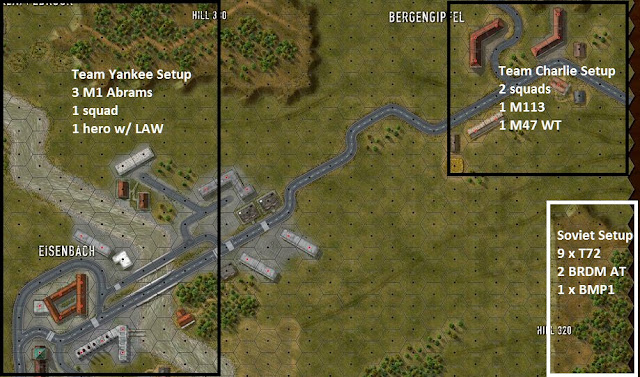 The Soviets should place their tank leader just slightly back from the hillside and surround himself with stacks of T-72s (remember that you can stack two vehicles per hex).  Both ATGM vehicles should be placed in the 1 hex command range of the Soviet leader and at the lip of the hill with an LOS to any American armor of Team Yankee.  The Soviet leader will activate all surrounding hexes on the first impulse of Turn 1. 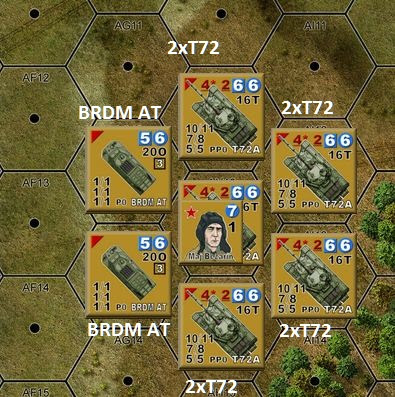 You can also stack your BMP1 with one of the BRDM ATs and add to the chaos.  I would recommend expending the BMP1’s ATGM on the US M901 if it’s out in the open and close enough and spotted.  Otherwise, fire it at a US tank or maneuver it into Bergengipfel to stall the US reinforcements there from reaching Eisenbach..
Opening Impulse:  The Wonderful World of ATGMs
If the US player places his Abrams out in the open in LOS of the ATGMs, you can shut down the opportunity fire capability of the Abrams by starting off the game targeting these units with your ATGMs.  Of course, a smart American player will attempt to use opportunity fire on the ATGM units when they start targetting his tanks because the ATGMs are the biggest threat to his forces at this point.  The good thing about this is that, according to the rules, opportunity fire against targeting ATGM units that are busy aquiring can only be done with DFT (machine guns) and cannot be done with OFT (main cannons and other ordnance) so there’s actually a decent chance that your ATGM vehicles survive the opportunity fire although they may be shaken.  In either case, they have done their job successfully, which is to force the US players tanks to use up the opportunity fire they would have otherwise used on your tank rush.  You may want to spare one ATGM to hit at the American M901, which is a guaranteed kill on your tanks if and when it does fire.  Otherwise, make the M1 Abrams your priority targets.

Once you have soaked up the American opportunity fire with your ATGMs, get your T-72s rolling off that hill and towards Eisenbach!  Remember that you have surrounded your Soviet leader with tanks around his hex so this should all be happening in the first impulse of the first turn.
Hopefully, you have used your offboard HE artillery mission on the American units in Bergengipfel and it has shaken up enough of them to prevent your tanks from getting hit from behind as they approach Eisenbach.  If you have a particularly wily opponent who loves to set up unpredictably, then just fire the 122mm artillery rounds a little west of Bergefipfel so that the arty will degrade and/or block the LOS to your tank units as they rush towards Eisenbach.  Remember that artillery effectively creates degrading terrain and it’s as almost as good as Smoke in terms of blocking LOS.  It’s even better than Smoke because it stalls enemy movement.
If the Americans have set up their tanks close to your own set up area, you should try to isolate and surround them with your tank units and kill them on your next turn. If the Americans are set up further back, you should try to get as many units as possible into Eisenbach itself, use the buildings as cover and try to goad the US into a close range street battle.
The key here is to preserve as much of your forces as possible on their way to the city, inflict maximum losses on those American tanks and then prepare for the US to start sending reinforcements from Bergengipfel right away.  This is not an easy task for the Russian player but luckily, the Americans also have 99 problems to deal with too.  For example, the US player has a terrible dilemma here because sending M113s from Bergengipfel to reinforce Eisenbach will surely result in a quick death from T-72s and moving out in the open on foot is equally deadly.
Also, even if the Americans win initiative on Turn 2, they will be forced to choose between targeting your Soviet tank leader, adjacent enemy units and any remaining ATGM vehicles sitting back on Hill 320.  In the picture above, Capt. Bannon will likely activate himself and the adjacent M1, hit the Soviet leader tank (scoring a kill) and then the adjacent M1 will kill one of the T-72s sitting beside it.  Big deal. That still leaves 7 tanks to contend with at close range.  The Soviet player can then spend the rest of the turn assault moving the rest of the T-72s adjacent to the rears of the M1s and firing at them point blank (save one or two tanks for opp fire on any US units foolish enough to try and reach Eisenbach).

If the Soviets win initative, fire at the US leader tank with your ATGM unit and then use the next Soviet impulse to activate your leader and the surrounding Soviet tanks to kill it.

At first, this scenario looks like a cake walk for the Americans as the Soviets have to send masses of armor out into the waiting fire lanes of the Abrams tanks.  However, with the right amount of setup and a very aggressive opening, the Soviet player can pull this one off.

Update:  After trying this out a bit more, I can see some problems with the above advice.  First of all, the US units will probably be out of range to return opportunity fire at the ATGM units with their machine guns.  Secondly, the Soviet ATGM units may not be quite the American tank killer I had initially thought.  HEAT missiles that attack vehicles with a red armor factor have their penetration reduced by 4, which means that the penetration of the Soviet BRDM ATGMs is a meager 12 – still a threat that might shake up the Abrams but probably not potent enough to score kills.

As a result of all this, I would modify my advice as follows:  The Soviets should sink their two off-board smoke artillery just to the west of Bergengipfel and then fire their HE artillery just to the northeast of Eisenbach.  The latter might be effective in blocking the American Abrams LOS to the Soviets as they move off Hill 320 in the initial impulse.  This should effectively protect the Soviet tank rush as it pours towards Eisenbach.

My basic advice of keeping your units together and in command range of the leader, using smoke and artillery to block LOS and rushing your tanks as close as possible to Team Yankee in the opening turn remains the same.