I’ve been playing quite a bit of Firepower lately (and badly, I might add – I still don’t have a great grasp of the advanced rules) and it’s been a lot of fun.  After my first few forays into the game with the Soviet-Sino border clashes, I decided to have a good series of matches between the Soviets and NATO set in LnLP’s “World at War” universe.

If you’re familiar at all with “Heroes of the Gap”, you’ll know of a nice little scenario called “First Probe”, which features a mostly infantry fight between the Americans and Russians in the tiny West German town of Bergengipfel.  After playing the LnL game earlier today for some inspiration, I decided to set a Firepower scenario in the same battle, zoomed in on the actions of just two squads and a handful of buildings on the outskirts of the town.

I had actually played through this scenario a few times, with wildly varying results.  This is just one of those sessions which I think will amply demonstrate how deadly and unforgiving this game can be.  So…without further ado, here we go:

The Americans start out this LnL scenario with their location “hidden” from the Soviets.  I have tried to do the same way by rolling for US soldier locations in each building after the Soviets come into view.  If you’re playing 2-player, then just have the American player secretly write down his various unit locations on a beverage-stained napkin.  The Soviets get a couple of smoke artillery missions to start the scenario, so I’ve decided to just roll 1d10 and let the Soviets place that number of smoke markers anywhere on the southern board.

Here’s the map.  It’s based very loosely on the terrain near Bergengifel.  The Americans write down their setup locations in any of the buildings on the northern board (or, since I’m playing solo, we’ll just roll randomly for it).  The Soviets will approach from the south.  Their objective is to take 3 buildings. 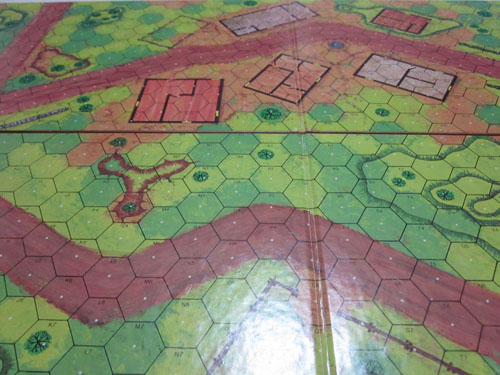 The Soviets get 6 smoke markers to start off with. They will last for two turns before dissipating. 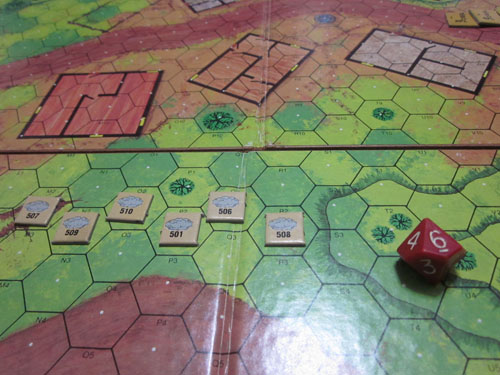 The Soviet Motorized Rifle squad is well trained and well led, with 3 leaders.  It gets 4 activation chits (dark green) while the Americans only get 3. 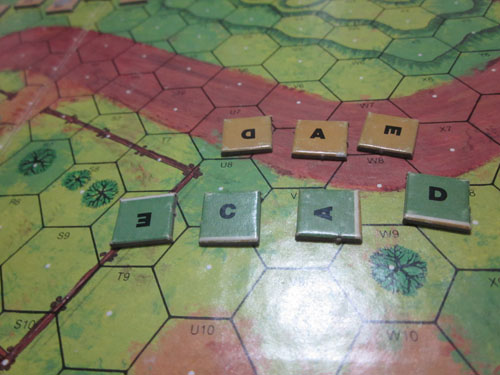 The Soviets split up into 3-man teams and approach the buildings.  One squad comes straight up the middle with the smoke blocking LOS of the advance.  The squad leader (Sgt. Buryshkin) and two men stand near a tree at the edge of the smoke. 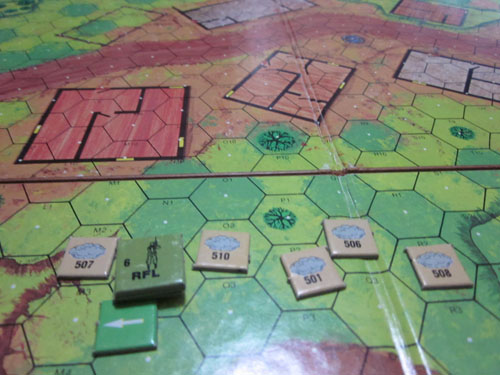 The other two teams approach along the east side of the map.  Their plan is to go over the hill and try to take the American-held buildings using coordination and close assault. 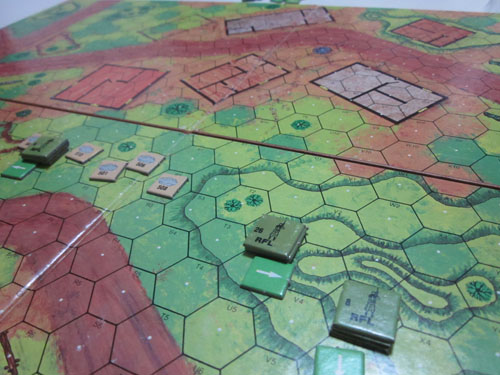 The American positions are revealed!  Boone (7), Curtis (6) and Tanaka (26) stand in the windows of the building closest to the Soviet advance, waiting to kill any approaching Russians.  Sgt. York (2) stands at the window in the building to their left. 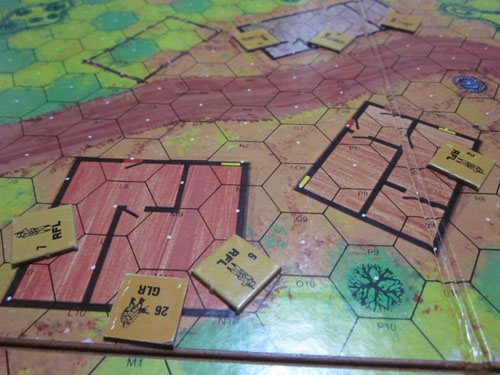 The other buildings to the side and in the rear have three US soldiers each, ready to lay on the hurt. 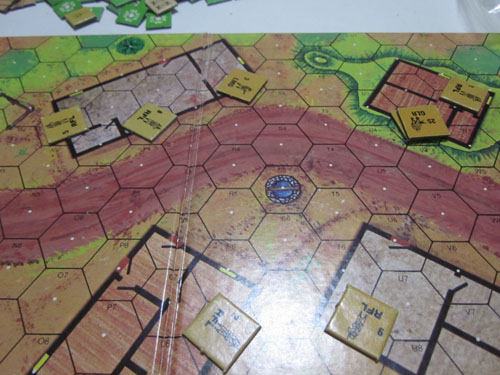 Pvt. Tanaka sees shapes moving through the smoke and throws a hand grenade at Buryshin and his team.  Luckily for them, the grenade disappears in the smoke and explodes about 12 yards away, harmlessly. 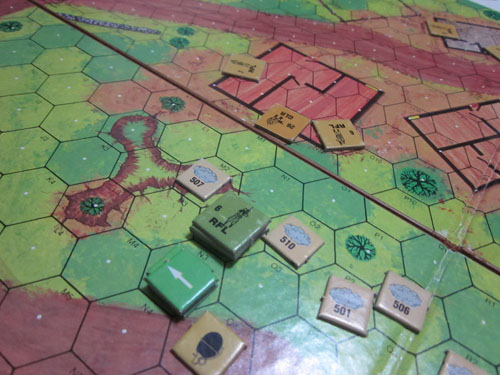 York opens up with his M-16A1 at the Soviets on the hillside.  He suppresses them and wounds one of the Russians in the arm.  Pvt. Cherkesov (18) lays prone and stunned from the wound.  Will poor Pvt. Cherkesov ever catch a break? 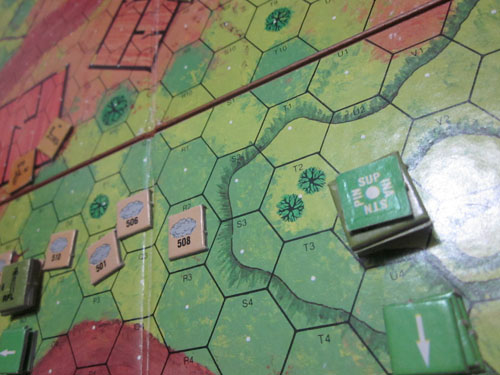 Buryskin fires back at Tanaka, standing in the nearest window, and hits him in the chest.  Tanaka falls dead to the floor. 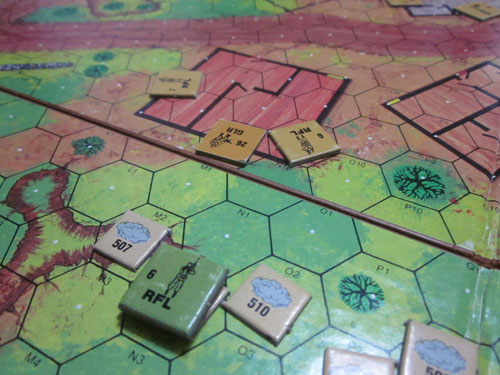 Pvt. Cherlin  (19) and Kuzmin (5 – stacked below him) approach the house and crouch around the corner. 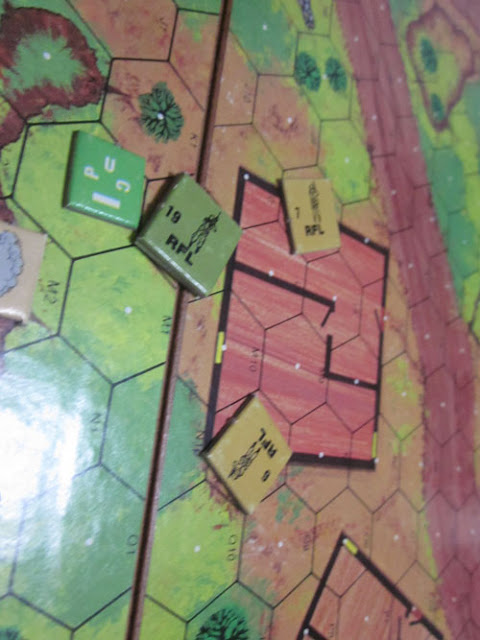 Cpl. Coleman (25) fires his grenade launcher at another team of Soviets on the hillside to the south. 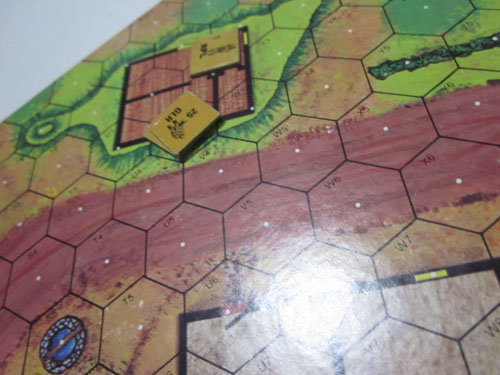 The round lands right in the middle of them, killing Dmitriev and Vasiliev.  The remaining Russian soldier is stunned and prone. 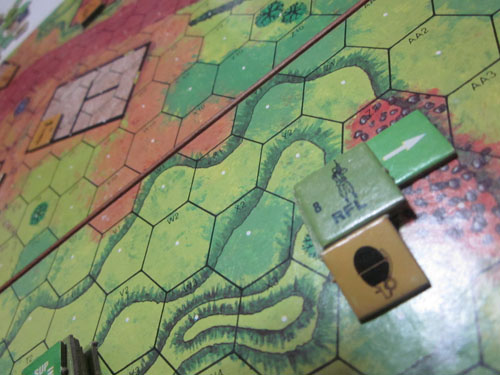 Curtis (6) moves to the nearest window and steps over Tanaka’s body, spraying the crouching Soviets and killing Kuzmin! 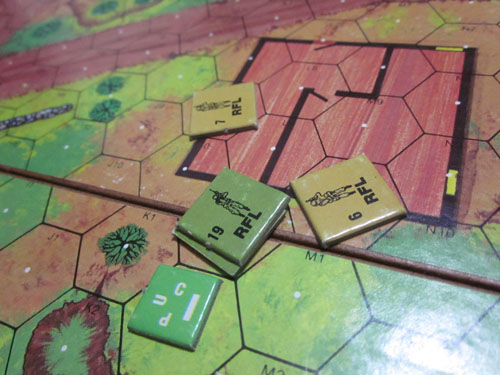 Coleman lets loose with the M203 grenade launcher again, hitting the other team of Soviets on the hillside.  The grenade doesn’t kill anyone but it manages to start a fire in the hex.  The nearby tree goes up in flames. 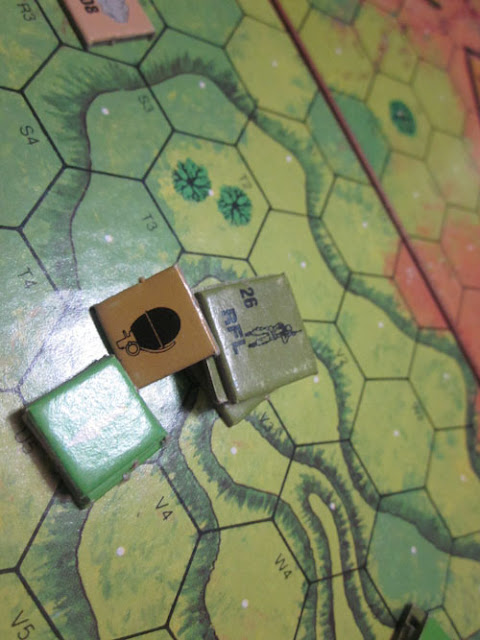 Coleman quickly chambers another grenade and fires off the last one at the Soviets who lay prone and stunned near the burning tree.  It misses by a wide margin.  Unfortunately, the Russians are pinned and cannot move.  The fire spreads very quickly and Smirnov and Cherkesov die. 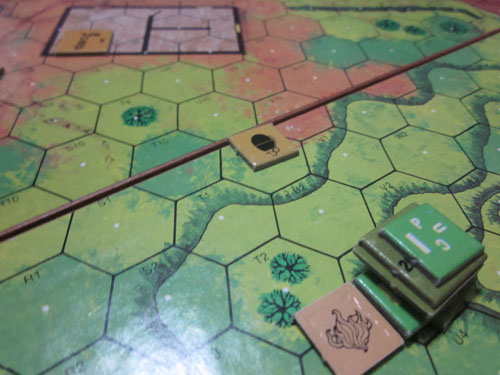 Cherlin (19) spins around and see Curtis in the window, letting off two shots.  Both rounds hit the rifleman, killing him instantly. 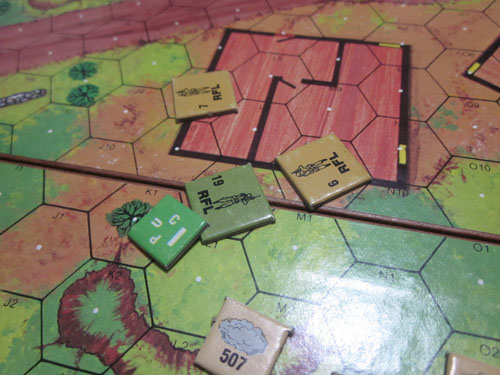 Buryshkin (6) decides to try and help infiltrate the nearby building with only one American left inside. 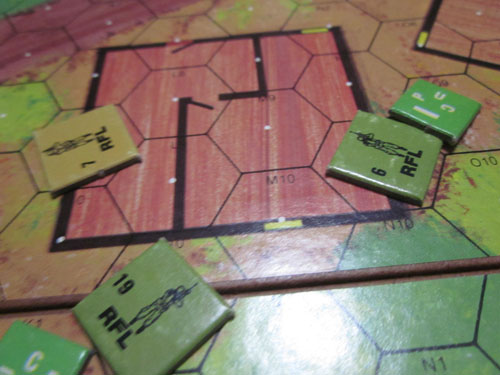 Unfortunately, the Americans get their command chit pulled twice (the Soviets have lost two chits already thanks to taking so many casualties) and Lee (5) moves from the building to the north to melee the prone Sgt. Buryshkin.  Lee kills him. 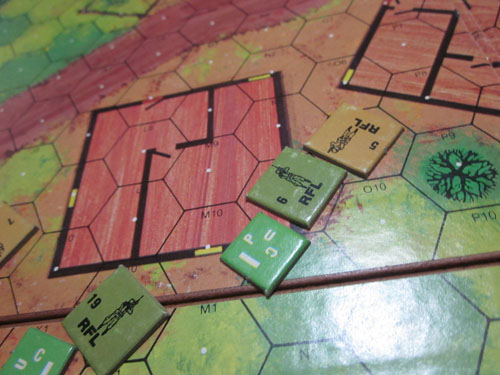 Boone (7), the lone American left in the building comes out of the window, sneaks around the corner and kills Cherlin (19). 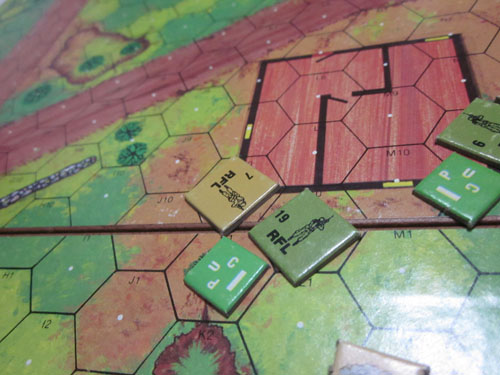 What a mess!  Only two Soviets are left at the end of the turn.  The Russians decide to call it quits.

A couple of things went disastrously wrong for the Russians.  First, the command chit pulls heavily favored the Americans, who seemed to find the Soviets vulnerable at the start of every turn.  Second, and this cannot be stressed enough, the Soviets bunched up in groups to make movement and command easier.  Unfotunately, this left them open to attack from area-effect weapons.  Bad luck hampered them too.  Being stuck in a fire hex while being too stunned to move led to the loss of an entire 3 man team.  Careless movement near a building without good coordination led to the end of another.

A recent play of this scenario led to some very interesting results in the form of a Soviet sweep to victory.  The Russians bunched up and charged into the buildings after some lucky chit-pulls.  Once they get into the buildings, the Americans have a hard time focusing their heavy weapons on them.  I’ll be playing through this one again with different tactics to demonstrate the various results from the game.