For the past week, I’ve been reporting on a playthrough of “Tread Heads”, a scenario from Lock ‘n Load Publishing’s Forgotten Heroes: Vietnam. This scenario features an NVA ambush of a US armored column. In my last write-up, I detailed the many and myriad ways that the NVA thoroughly ruined the American’s day in turn 5 after springing an ambush that destroyed an M-48 tank and caused the Americans to abandon an M-113. 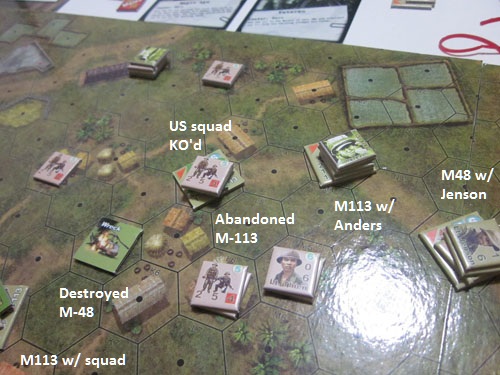 So the U.S. has taken some heavy casualties in the initial ambush.  Here’s what happened next.

At the start of the next turn, Anders and Jensen dismount from their respective vehicles and head for the cover of the jungle to the east. 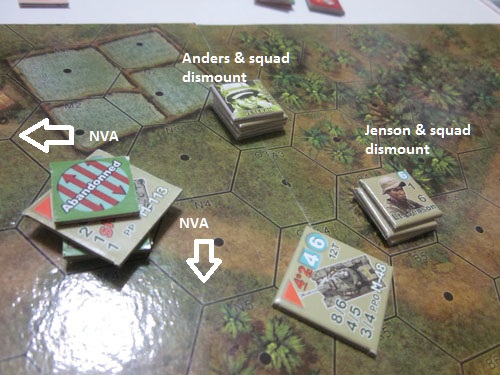 However, as the US officers and their squads start pulling back, the NVA fire on the next M-113 in the column, causing it too to become abandoned.  Half of the American vehicles are now disabled, destroyed or abandoned. 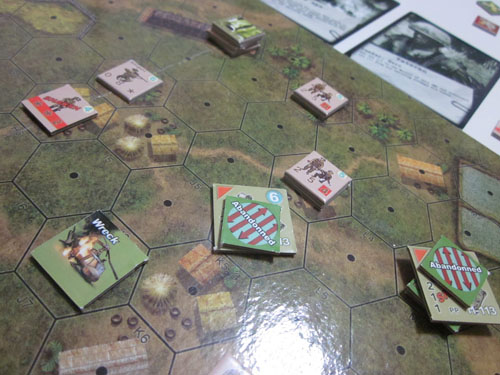 In the southwest of the village, the lead M-113 and the M-48 tank previously being used as a recon vehicle turn around, and start firing at the NVA from the south.  The remaining US forces are split up as the middle of the column is disabled.   The American officers (Jenson and Anders) are way up near the tail end of the column in the northwest. 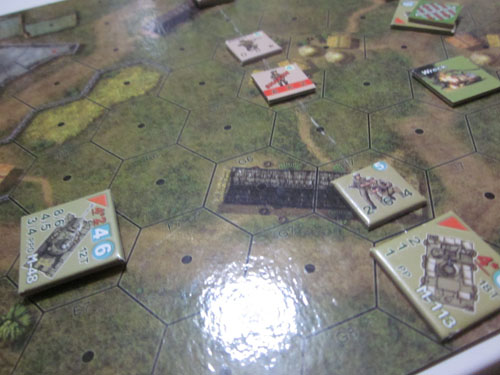 My tactical error in assigning men to the convoy units is revealed.  The leaders were all riding in the back so now there’s a lone US squad down in the southwest fighting for dear life. 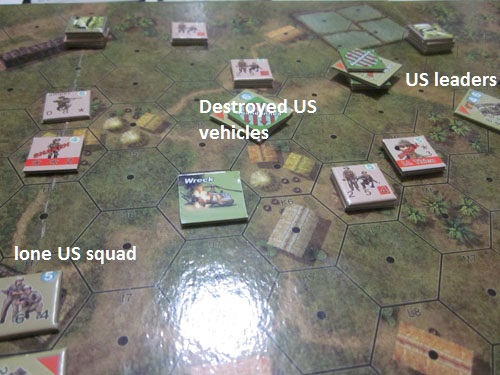 With few options left, the lone US squad advances north on the nearest group of NVA soldiers and enters melee with an NVA unit shaken up by M-48 tank fire.  The squad is now adjacent to a lone NVA sniper who has been causing havoc on the battlefield. 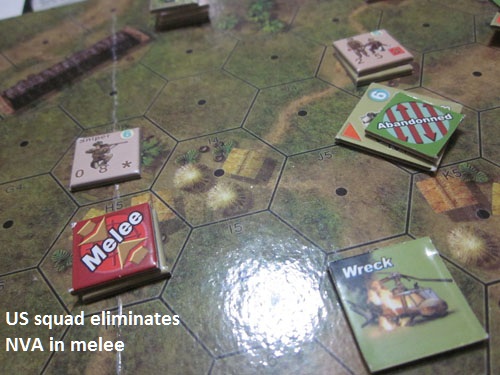 On the next turn, the NVA sniper fires away at the adjacent Americans, causing casualties and shaking the unit. 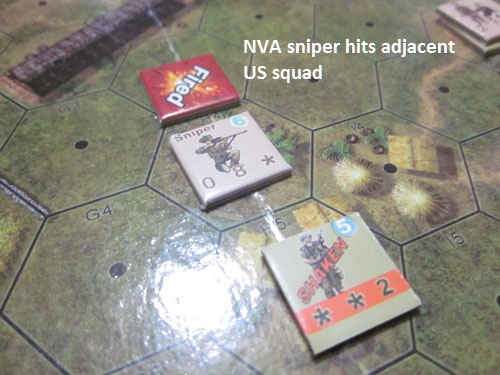 On the next turn, Lt. Khai moves south with his squad and they eliminate the American squad.Lt. Khai’s other squad moves towards the abandoned M113 and melee’s the crew, eliminating it as well.  The US is taking heavy casualties. 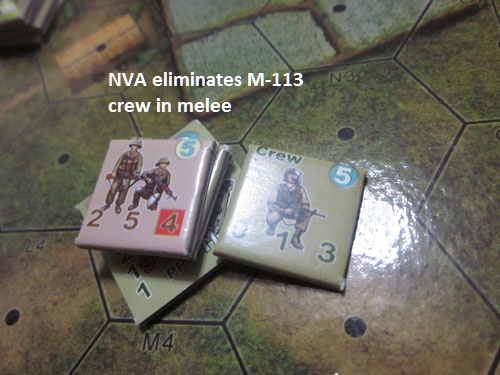 By turn 8, things start looking up a bit for the US. Lt. Jenson makes a crazy charge at Lt. Thien and his squad, who miss the Americans as they advance towards them.  Instead of charging into melee, Jenson gets close enough to direct M-48 tank fire on Lt. Thien.  An NVA squad near Thien fires an RPG-2 at the US tank but the shot goes wide.  The M-48 fires on Thien and shakes up the NVA officer and his men.  The next turn, the NVA are unable to rally so Jenson and his squad eliminate them in melee.  This is a good example of really nice coordination of movement and fire between the tank and the American squad. 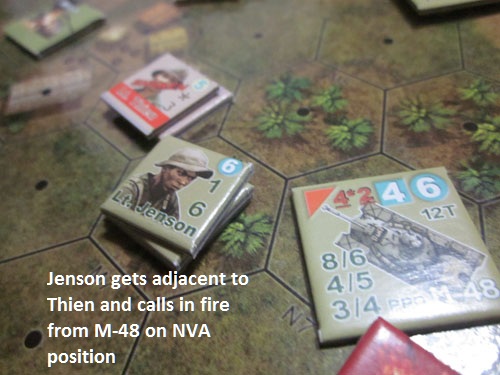 In the turns following the ambush, Anders has carefully approached Lt. Khai’s initial position from the jungle cover to the east.  The NVA, however, have largely moved out of the northern village area so Anders decides to mop up any remaining NVA units and flush out the sniper.  As Anders and his men try to get closer to the sniper’s position, the American officer is shot and wounded. 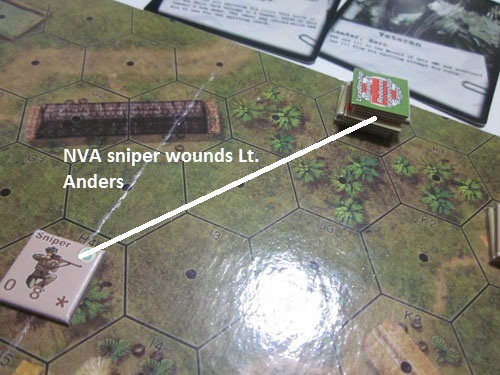 The US decides that it has had enough.  Jenson mounts the M-113 and after eliminating Lt. Thien earlier.  They head for the exit point off the map. 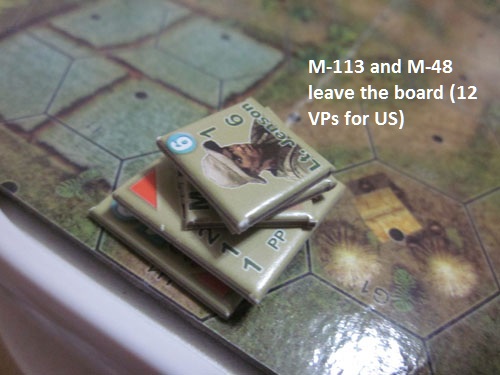 Lt. Anders remains behind with an M-48 down south.  Anders is wounded but determined to mop up the remaining NVA forces.  Turn 10 ends and the scenario is over. 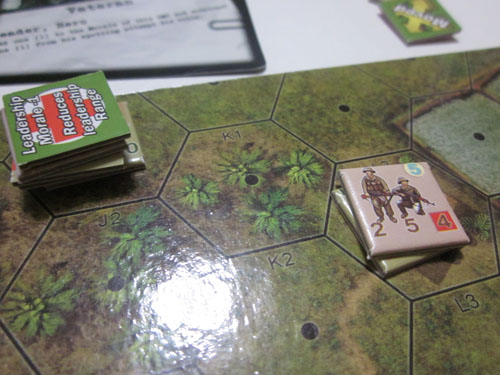 The final tally is 23 for the NVA (3 vehicles abandoned plus six American squads eliminated while the US gets 20 VPs (2 vehicles exit the board [8]  plus Jenson and his squad [4] and 8 points worth of NVA squads/leaders eliminated).

The Americans sprang back pretty quickly despite the ferocity of the NVA ambush but the column placement really hamstrung them because the leaders were at the tail end and a couple of surviving squads were in the lead vehicles.  It was hard to mount an effective offense from south of the village with no leaders but the lone American squad down south did an admirable job of eliminating a pesky NVA unit that was wreaking havoc on American troops and vehicles alike.  The NVA did a nice job of covering each other with interlocking fields of fire and this really prevented the Americans from escaping the trap.  I don’t know if the US could have avoided losing half the convoy vehicles.

Another way you could play this scenario as the NVA is to have both platoons set up two separate ambushes on the US.  One of the platoons could hit the Americans as they enter the village and the other could set up further down the trail and hit them as they try to leave the map.  Alternately, the NVA could pull back after the initial hit on the convoy and strike them again after the Americans reorganize with the remaining vehicles, turning the scenario into a pursuit.

I believe that the placement of vehicles within the convoy was actually pretty decent and helped significantly in at least minimizing US troop losses.  The lead vehicles managed to get off some shots that shook up the NVA on their flanks while the rear vehicles used their fire to support Jenson in his successful attempt to eliminate Lt. Thien and his platoon.  The key to good convoy placement is to provide enough strength at the front and back and to separate those vehicles a bit from the main elements.  This allows them to move in and serve as a reaction force to disrupt the ambushers.