In LnL’s Forgotten Heroes:  Vietnam scenario “Tread Heads”, the NVA spring an ambush on an approaching American armored column.  The past couple of posts have featured a breakdown of how each side prepared for the fight.  Now it’s time to sit back and watch how it all panned out.  In this post, I’ll focus on the lead-up to the ambush as well as the ambush itself.

One of the things you quickly learn in LnL games is that one placement or setup decision that is a bit off can determine the whole course of the scenario.  That proved to be the case here as well, but I’ll get into that a bit later.  For now, we’ll talk about Turns 1 through 4 in this 10 turn scenario.

On Turn 1, the convoy enters with the lead tank 5 hexes in front of the main body of the column. 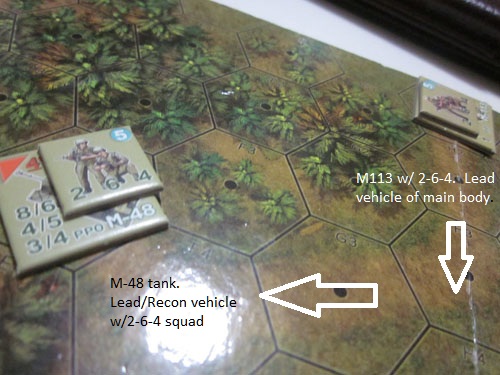 A couple of turns later, the NVA lets the lead US tank go by without firing a shot.  The main prize approaches. 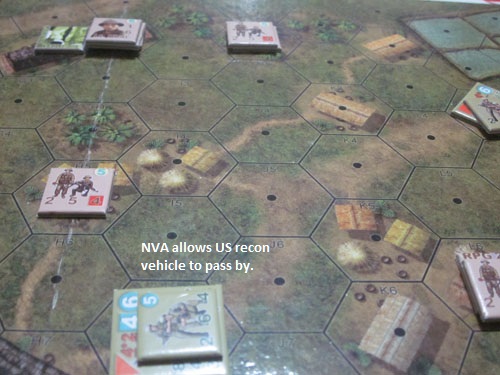 The main body approaches with an M-113 in front, an M-48 behind it, followed by two M-113s packed with troops inside.  An M-48 (not shown) hangs back in the rear, waiting for trouble to start. 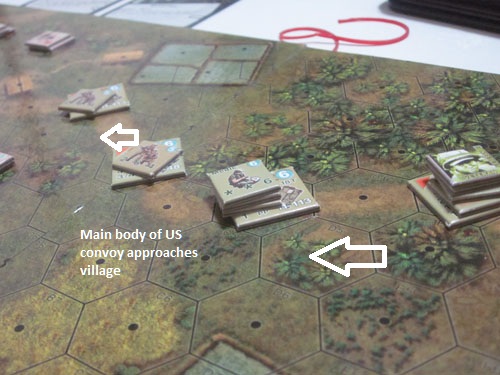 On Turn 4, the main body of the convoy enters the village and the NVA opens up.  Lt. Thien gives the order to a squad with an RPG-2 and it opens fire, missing the nearby M-113.  Luckily for the NVA, however, small arms fire shakes up the M-113. 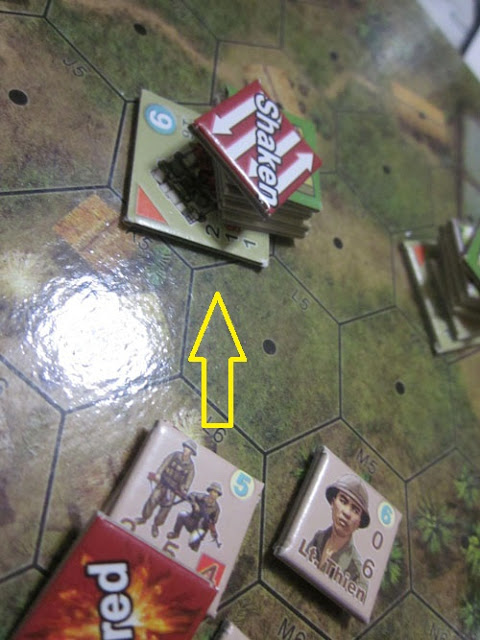 Lt. Khai’s RPG-2 squad up north, however, has even more luck.  It fires at the rear of the M-48 from the main convoy, destroying it and eliminating the squad riding atop.

Khai orders another squad with an RPD to fire at the shaken M-113.  They roll another shaken result, which causes the APC crew to abandon the vehicle.  The US squad riding inside the APC also decides to get out while the gettin’ out is good and they remain shaken in the same hex as the crew. 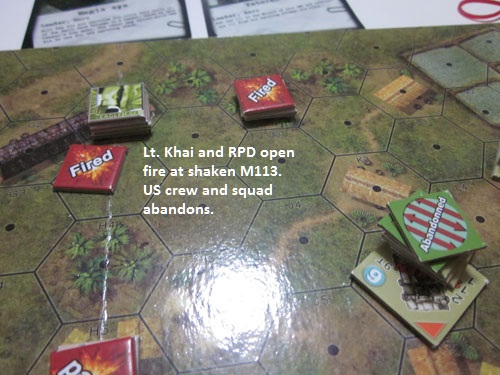 Another squad fires at the passengers riding atop the lead recon vehicle on the road outside the village and shakes up the US squad, which dismounts in a panic.  As the end of Turn 4 approaches, Lt. Thien delivers the NVA coup de grace, sending out one last squad to melee the shaken US Army squad, eliminating it and the M113 crew. 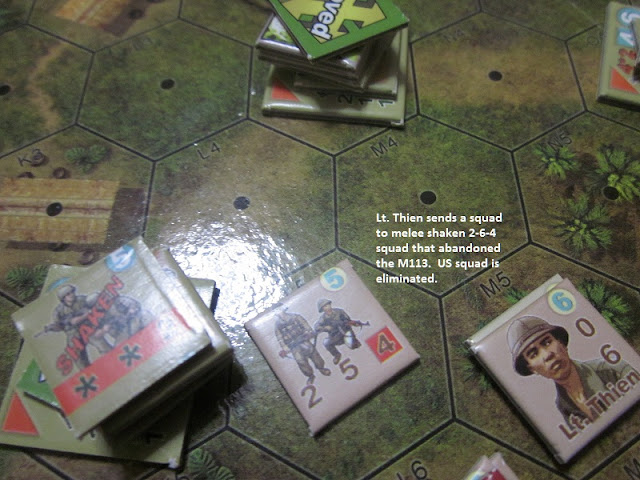 And so the trap was sprung and the initial count at the end of Turn 4 is:  2 eliminated American vehicles, 2 eliminated US Army squads and an M-113 crew.  That’s a total of 14 victory points so far. It’s not a bad result for the NVA since 1/3 of the US column is now eliminated and the Vietnamese have suffered no losses. However, there are still six turns left for the US to recover and get out of the trap.

I’ll be posting the results of Turns 5 through 10 in the coming days.