I’ve been learning the Basic and Advanced rules of Firepower lately, which is no small feat.  The Basic rules are pretty straightforward but when you move into the Advanced and Optional rules, things get pretty heavy going.  I made a little scenario based on the Sino-Soviet border clashes that happened during the 1960s.  Since I’m playing this thing solo and just starting out trying to get a handle on the rules, I’ve made a couple of simple short scenarios that are admittedly one sided just to show off the craziness that can happen in this game.

For those who aren’t familiar with the Avalon Hill 1984 offering, Firepower was an attempt at simulating individual mano-e-mano combat on the battlefield.  The rulebook is chalk full of rules for every situation imaginable (want to pry open a tank hatch or break down a locked door?  No problem – it’s in there) and there are scenario guidelines for making your own battle, complete with a list of squad compositions of over 40 major countries.  There are also dozens, if not hundreds of weapons included along with stats and charts for all of them.  It was an ambitious project and I can’t say whether or not it succeeded as a simulation but it’s definitely fun to play. The game is based on chit-pull and impulses.  Once a side pulls their own chit, they get two impulses, which usually means that you can activate two soldiers to perform a basic action or two (go prone and fire, for example), depending on how you stack your guys and use your leaders.

In this scenario, a squad of green PRC recruits is patrolling the Sino-Soviet border in 1969.  Tensions are high thanks to the Zhenbao Island (which the Soviets claimed as “Damansky Island”) incident earlier that year.  A lot of people think the border clashes were due to Mao Zedong trying to signal to the US that there was a split between China and the Soviet Union.  I tend to believe that it had more to do with the fact that Mao saw the writing on the wall for Vietnam and was concerned about having a Soviet client state on his southern border, which made him want to expand to the north.  Anyway, I’m wandering off-topic here.

The Chinese squad is sent out early in the morning on June 12th, 1969 and wanders down the road, gets hopelessly lost, and unintentionally crosses the unmarked border at some point, while trying to find the way back to base an hour later.  The Soviets are patrolling this area of the border and although they aren’t expecting trouble, they end up bumping into the Chinese squad.  Both sides are surprised and a short skirmish follows. I played four turns of the game, which amounts to less than a minute of game time.

One of the cool things about Firepower is that you actually get to name all the soldiers in the squads, roll up their individual statistics (such as weapon skills, driving ability, motivation, you name it) and even promote them within the squad.  So all of these soldiers are fleshed out quite a bit, which should make for an interesting AAR.

The Chinese squad, hopelessly lost and having accidentally crossed into the Soviet Union 5 minutes ago, wanders down a dirt trail believing that it is returning to base. Pvt. Lin (25) and Pvt. Gao (5) are in the lead.  They move at three hexes per turn in a column.  They aren’t running but Lt. Cheng (23) is trying to rush them along a bit, hoping to find familiar territory. 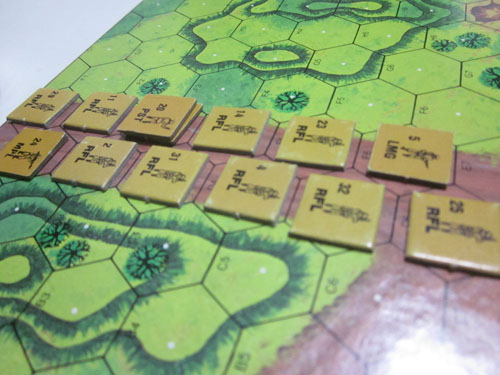 The Soviets are patrolling near the edge of a village on their side of the border, not expecting to run into any trouble on this sunny morning.  Pvt.  Cherkesov (18) is on point. 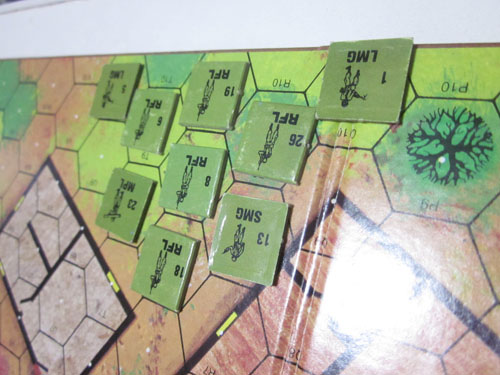 The Chinese round the bend, the officer, Lt. Cheng (23) silently puzzling over a map as the squad continues the march. 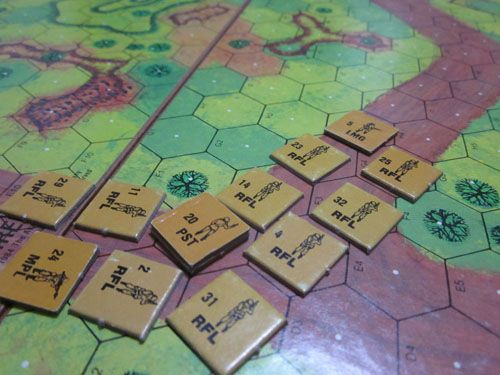 Just as the Chinese clear the outskirts of the village, they are spotted by the Soviet point man, Private Cherkesov (18), who is surprised and lets off a couple of hurried shots at the Chinese squad. 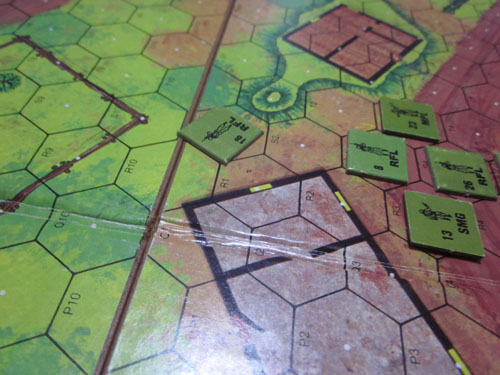 The Chinese know they are in trouble as the bullets whiz by.  Frozen in panic, they are unable to immediately respond to the sudden appearance of a lone Soviet soldier. 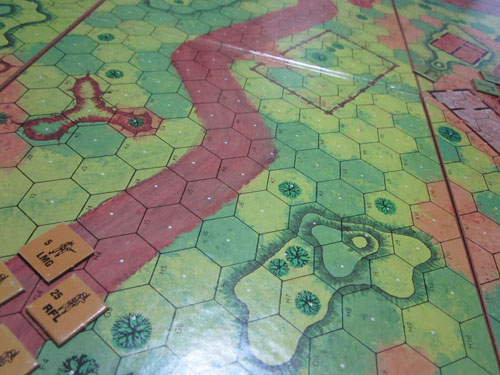 The Soviets officer starts sending men forward into position to hit the Chinese.  Pvt. Ivanov (23) climbs up the steep hill nearby to find a shot with his RPG-2.  Kuzmin (5) turns the corner of the building and opens up with his RPD at the Chinese squad. 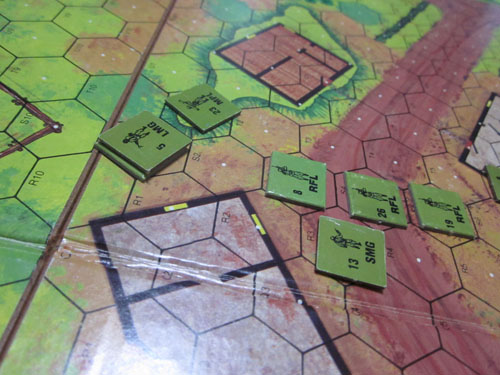 Pvt Gao is suppressed by Kuzmin’s automatic fire.  The rest of the squad is too stunned to respond.  Lt. Cheng is still checking his map! 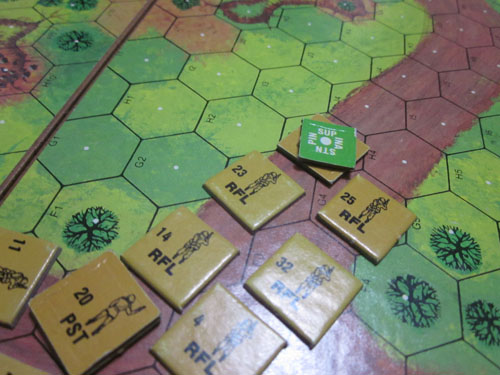 The Soviet assistant squad leader, Sergeant Buryshkin, runs around the flank then climbs over a fence. 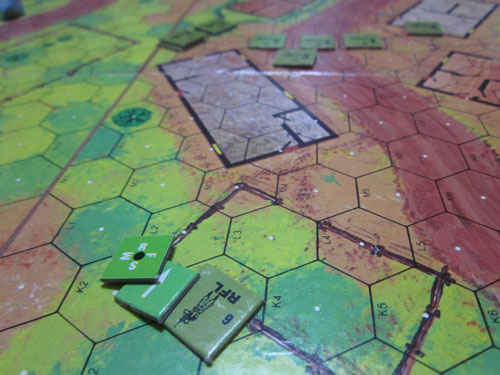 Lt. Cheng finally pulls himself together and orders his men to hit the dirt!  Everyone goes prone and hopes the Soviets will stop firing or that someone – anyone –  will do something! 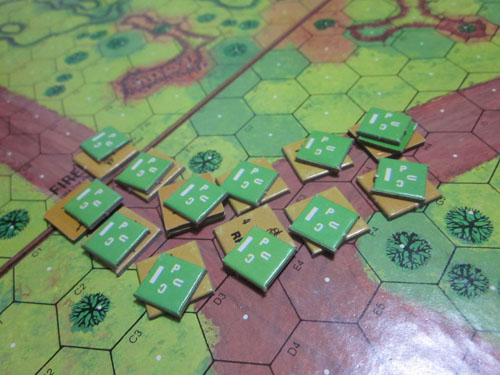 Cheng (23) orders Pvt. Lin (25) to the nearby tree while he himself gets further off the trail, hoping that the rest of the squad will see him and start spreading out.  Lin crouches on the right side of the tree and starts firing back at the Soviets. 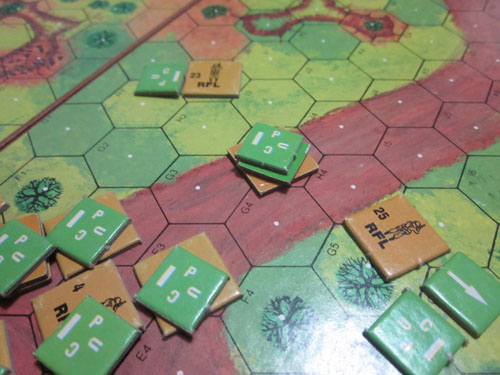 Lin sprays automatic fire at Kuzmin, the Soviet machine-gunner, who is standing out in the open and drawing considerable attention to himself.  Kuzmin is hit and wounded. 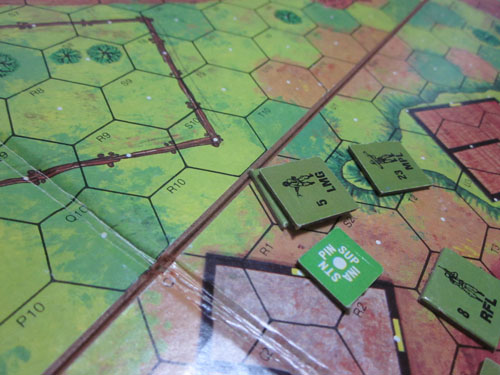 The Soviets use their remaining impulses for the turn.  Sgt. Buryshhkin keeps sprinting towards the Chinese group with a plan in mind. 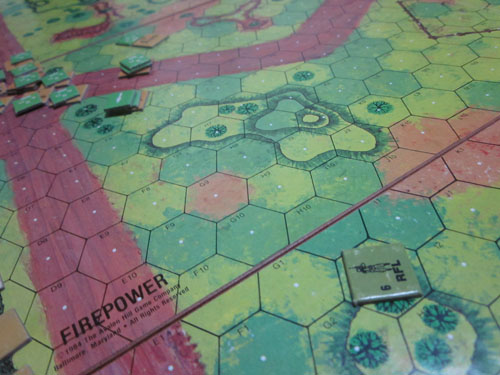 Meanwhile, the Soviets respond to the loss of their first machine gunner by ordering the second machine gunner, Dmitriev (1) to the top of the hill near the village. 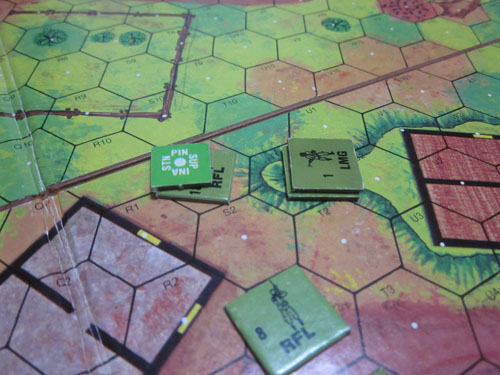 Sgt. Buryskhin runs up towards the prone Chinese squad, surprising everyone and throwing a grenade at the nearest Chinese soldier. 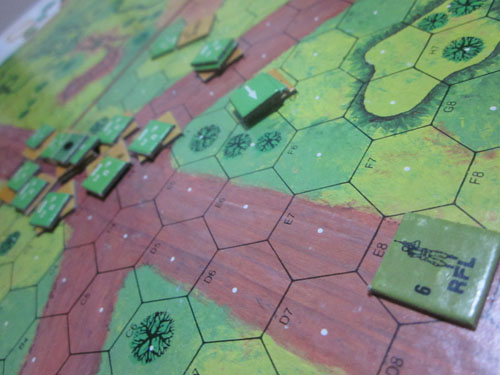 The grenade lands one hex further than intended but that’s okay.  It lands right beside the mortar team, Pvt. Wang (20) and Liang (30).  Wang tries to scoop up the grenade and toss it away but as he lifts it, the grenade explodes, killing him and stunning Liang. 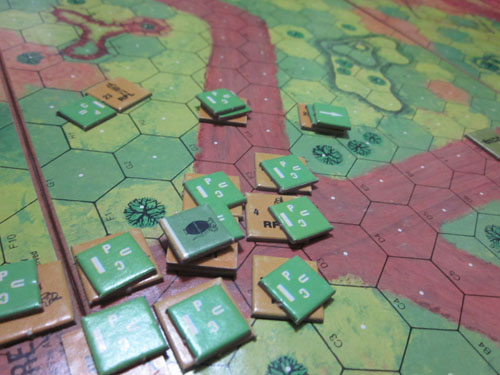 Dmietriev (1) goes prone and sets up his bipod atop the hill.  He starts spraying at the prone Chinese squad 60 yards away.  Due to his bipod, he can fire at three adjacent hexes so naturally, this is going to hurt bad for the Chinese. 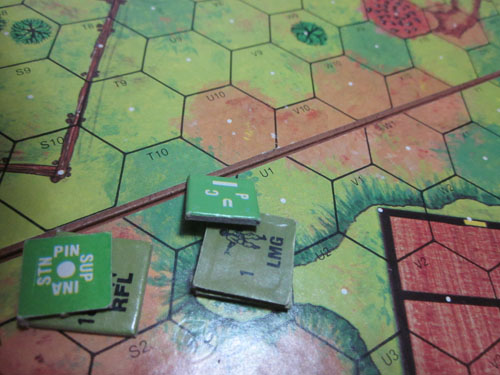 But although the first few shots suppress Cpl. Wu (32), the RPD jams, giving the Chinese a reprieve. 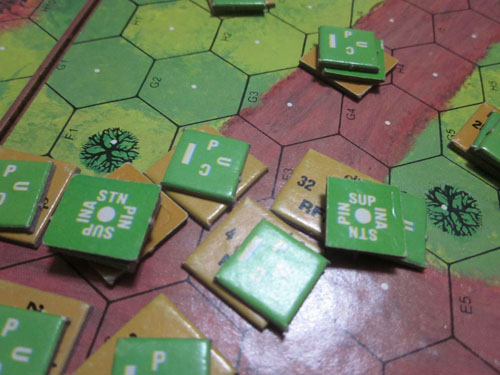 The Soviet sergeant, figuring that there is a fine line between bravery and stupidity, runs behind a nearby hill and out of the Chinese line of sight. 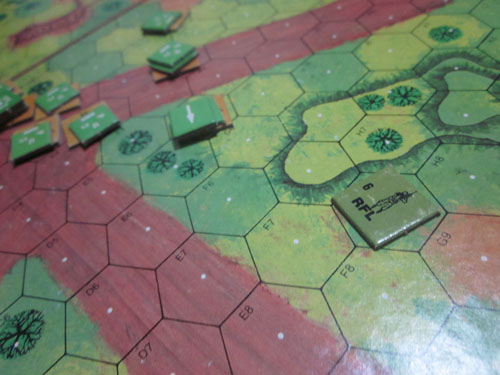 On the last turn, Dmitriev unjams the RPD and goes to town, firing at the prone Chinese squad, killing Cpl. Wu and Pvt. Yao (14).  The Chinese have lost three men so they lose an activation chit.  They are down to 2 chits on the last turn with three men dead.  Things are not looking good for them. 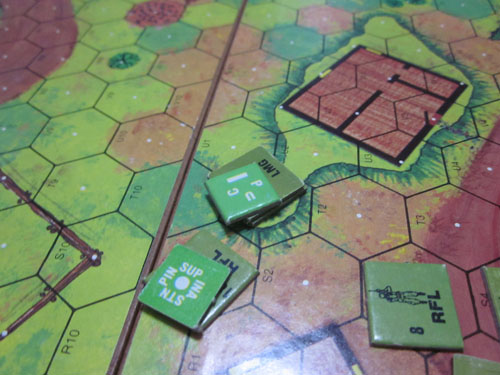 Determined to get back at the Soviets, Pvt. Feng (31) chases after the Soviet sergeant who is crouched behind the nearby hill.  Feng rounds the corner and squeezes off two shots at Sgt. Buryshkin, missing him completely. 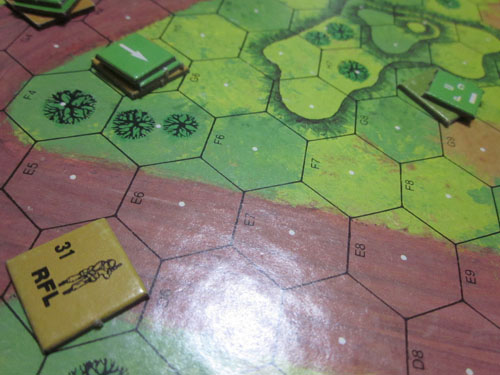 On the other side of the hill, Pvt. Lin (25) shoots and kills Pvt. Cherkesov (18) standing out in the open.  The Chinese are not going down without a fight. 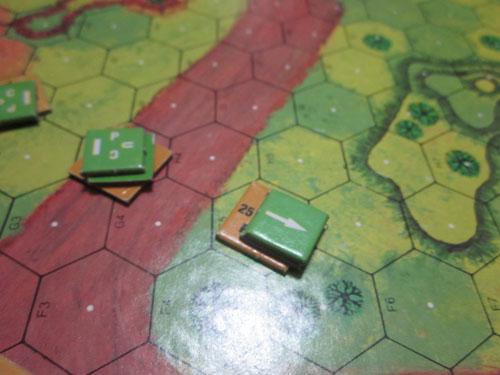 At 25 yards, there’s no way Soviet Sergeant Buryshkin can miss Pvt. Feng (31).  Buryshkin lifts his AK-47 to fire at the young private.  With a broad grin and certain aim, he pulls the trigger.  “CLICK”  The AK is jammed. 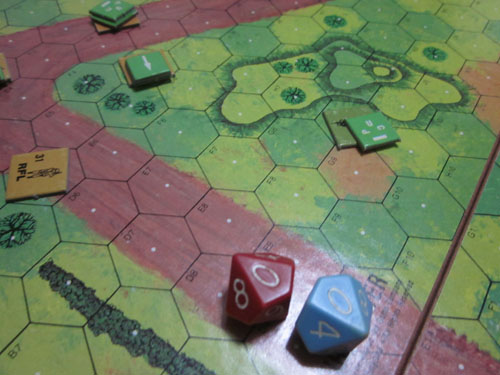 Turn 4 ends and the Chinese have lost the engagement.  Three of their squad are dead while the Russians have one wounded machine gunner and a dead rifleman.

Conclusion:  I definitely made a couple of mistakes here and there with the rules but nothing too bad.  This was actually a really good learning scenario and despite the seeming turkey-shoot nature of it, the Chinese actually did okay and almost gave as good as they got.

There were so many crazy things happening, especially with the machine guns and the grenades.  One thing that the two impulses per chit pull forces you to think about is how to get all of your guys engaged in the fight.  This means stacking soldiers together in the same hex, using your squad leaders and spending your time wisely.  One thing that the game tries to model is the fact that not everyone in combat is always firing back at the enemy and maneuvering for a better line of fire.  It tries to show that quite often, a couple of people (“natural fighters”) actually do most of the fighting and determine the outcome while others might actually do nothing at all except take cover.  This was definitely reflected in this scenario although I’m sure in a longer game, I could probably get more of the soldiers engaged in the fight.  As I mentioned previously, this game represented around 30 to 40 seconds of actual time in an engagement.  Great game!

Update:  Apologies to the Kalashnikov enthusiasts.  I am aware they seldom jam and this is modeled in the game stats for the AK-47.  However, as you can see in the last photo, I rolled a result that had a 1 in 100 chance of occurring.  Buryshkin should have cleaned his weapon better this morning!