In this scenario from Lock ‘n Load Publishing’s Forgotten Heroes:  Vietnam, an American LRRP (Long Range Reconnaissance Patrol) tries to ambush a group of Viet Cong approaching an American helicopter landing zone (LZ).  This scenario, called “Stay Behind” was created by Jeff Lewis, who based it around the events from a book by Michael Lee Lanning.  It’s a very short scenario (only four turns) and the Americans must eliminate two VC squads and extract via Huey by the end of the last turn.

The Americans get a single LRRP squad with claymore mines:

This doesn’t seem like much but the US gets an attack helicopter fly-by on Turn 3 and the extraction helo comes in on the same turn.

The scenario starts with Lt. Diem and his squads running into an ambush by the LRRP.  The M-18 claymore mines deployed by the Americans are detonated but Diem and his men are unscathed. 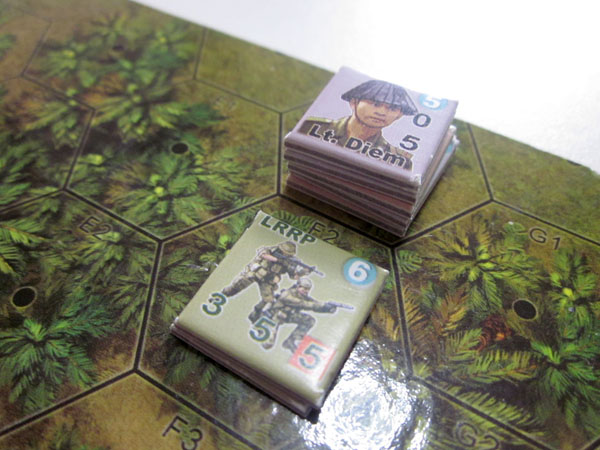 The LRRP opens up at close range on Diem and his squads, wounding Diem, killing an entire squad and causing serious casualties among the other squad. 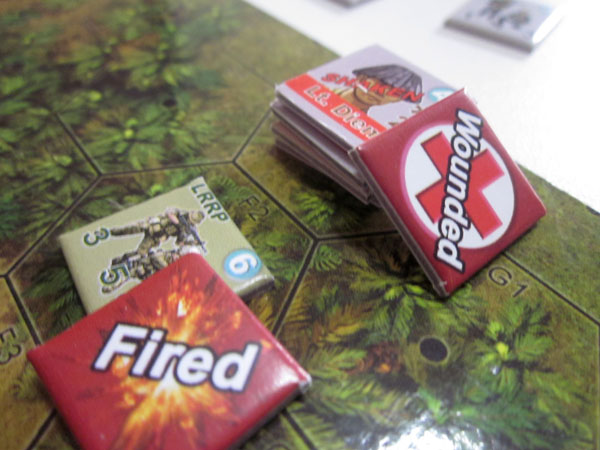 On Turn 2, the Americans win initiative and enter melee with Lt. Diem, eliminating him and his squads entirely.  The LRRP captures an RPG and a light machine gun. 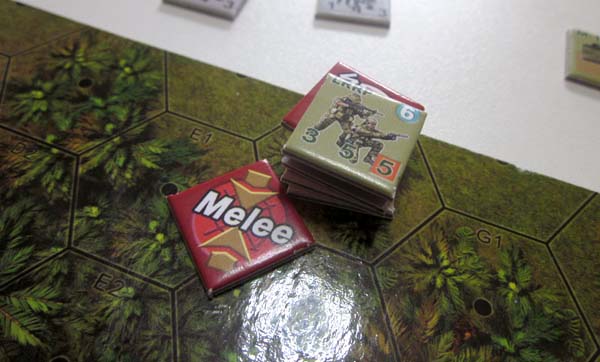 Another VC squad with an RPG enters the board from the west and approaches the site of the melee. 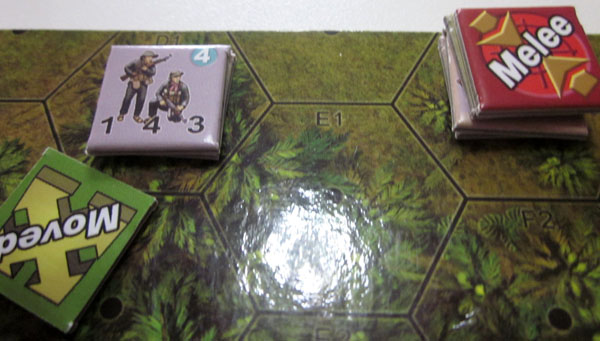 On Turn 3, the Americans withdraw further to the east as the NVA reinforcements close in.  The LRRP also has to get ready for extraction.  The VC hold their fire, opting to instead move close enough to hit the incoming American helicopters from the edge of the treeline on the next turn. 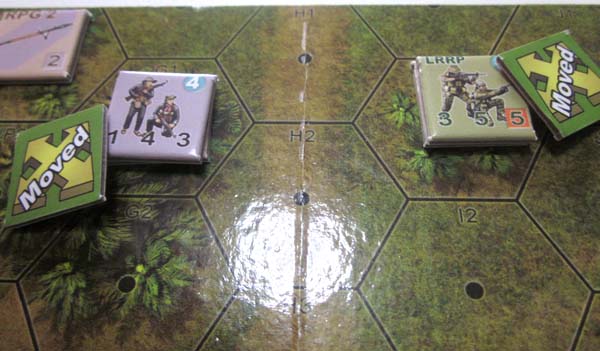 A Huey gunship is called in and tries to eliminate the pursuing Viet Cong and although it lets off several rockets and hoses down the jungle with machine gun fire, the VC remain unshaken. 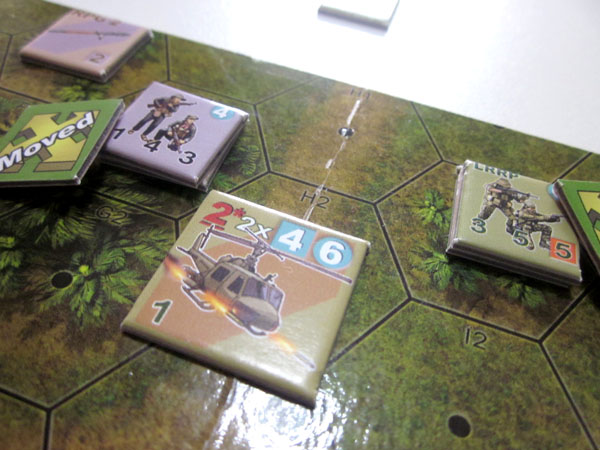 Another group of VC moves in from the west.  Armed with an RPG, they hope to close in quickly and shoot down the incoming Huey transport. 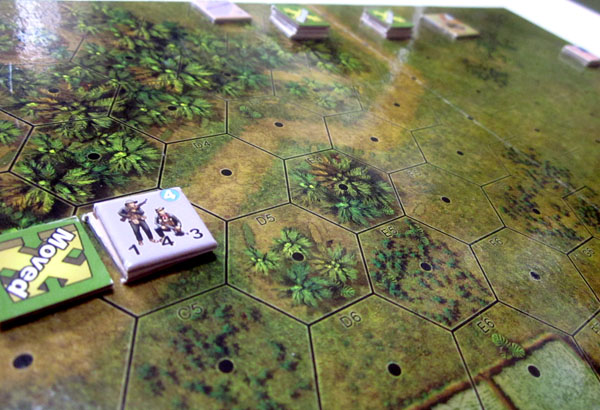 The Huey lands just east of the LRRP.  It’s still in small-arms range of one of the VC squads.  This is extremely dangerous as the nearby enemy units also have RPGs and will almost certainly attempt to shoot down the helicopter if they win initiative next turn. 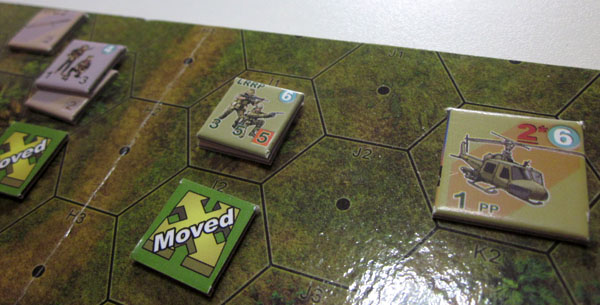 On Turn 4, the US is lucky enough to win initiative.  The LRRP team moves towards the extraction helicopter with no time left to spare.  The VC units take opportunity fire to shoot at the fleeing US squad.  Rockets impact the ground around the Americans and bullets whiz by.  The LRRP squad boards the helicopter.  There is one VC reinforcement squad far to the west – too far to be able to do much about what’s happening.

And by the next American impulse, they’re headed east over the jungle… 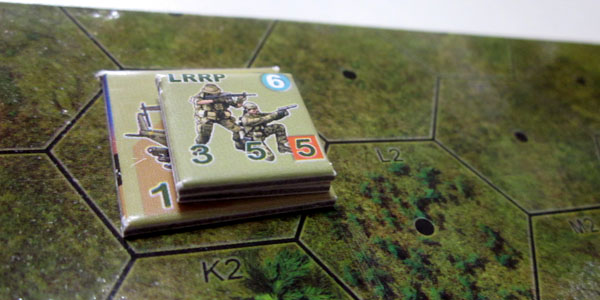 …leaving the VC far behind. 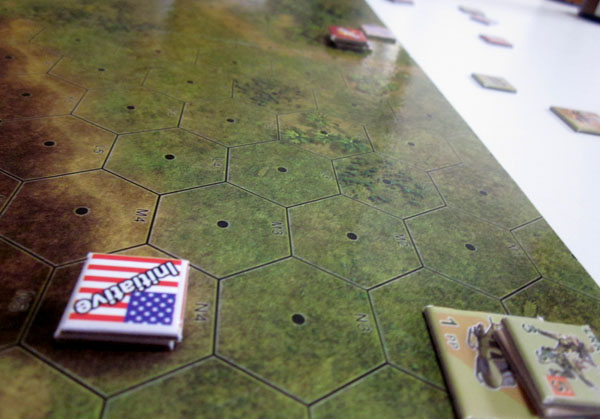