I took a short break from my current 6th Fleet campaign (don’t worry, it’s very much on my mind and I fully intend to complete it) to play around with my new copy of FH: Vietnam.  I’ve tried a few scenarios and one of my favorites is River of Perfume, which is a quick infantry only scenario that centers on the actions near Hue around the Tet offensive of 1968.  Here we have an engagement between the USMC and the Viet Cong.  The US is trying to capture five buildings while the VC are trying to deny the US their victory conditions.  This one turned out to be a real doozy and although I won’t remember everything that happened, I’ll hit all the major events that played out.

The VC have 3 buildings at the start.  They get a hero with the Rage counter plus a couple of squads. 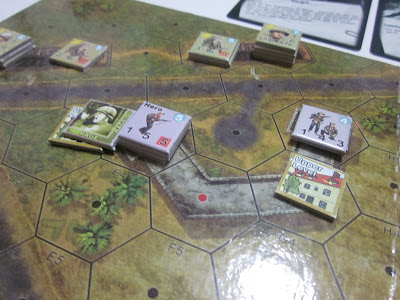 The charismatic Mr. Dobie is placed in the other stone building to the southeast with a few more squads. 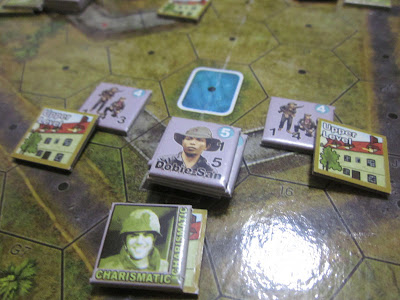 The lovely Arnat and her squads get placed in the building to the southwest. 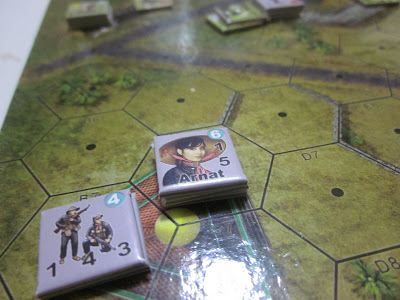 US Marines get placed in the northern buildings.  There’s a chaplain with some squads to the northwest. 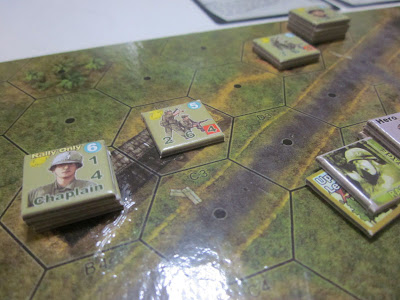 Sgt. Ash gets a few squads with some serious firepower at the top of the board. 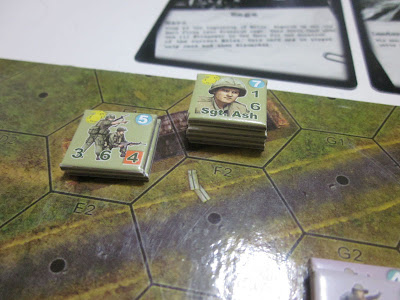 Lt. Reagin, with the Lucky Man skill card gets placed in the eastern part of the board. 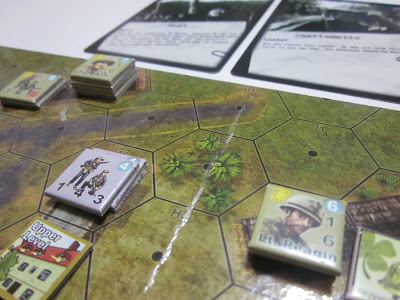 Lt. Reagin, taking advantage of his Lucky Man skill card, commits to some daring-do and infiltrates the northernmost building held by the VC. 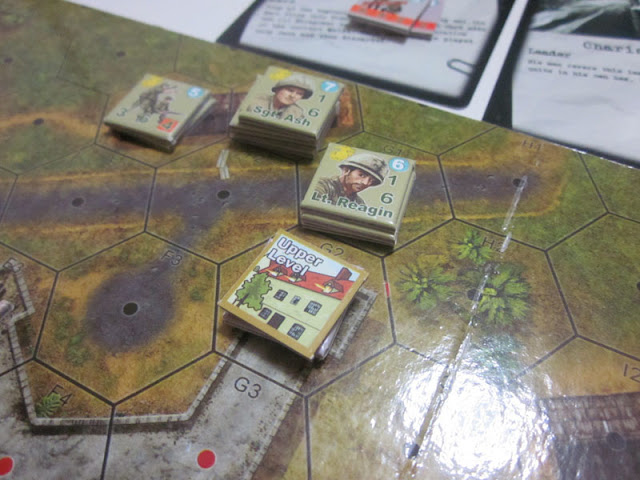 Seeing his chance, Dobie-san sends a squad of VC to take over the just vacated building left behind by Lt. Reagin.  Unfortunately for them, a US sniper has been left behind and wreaks havoc on the VC squad as they approach the building. 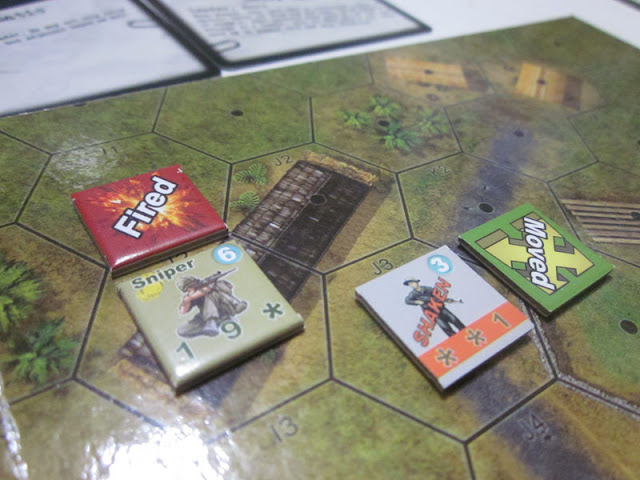 But the US luck doesn’t completely hold out for the end of the turn.  Sgt. Ash sends a squad of Marines to help clear the nearby building.  Unfortunately, the VC hero and the squad in the second floor of the building inflict heavy casualties on the approaching Marines. 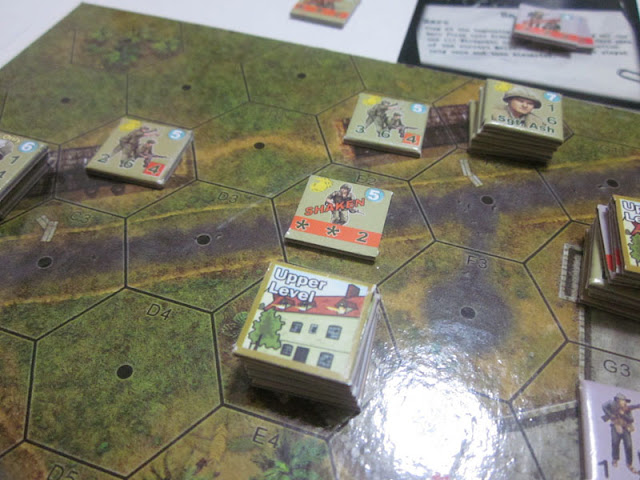 Thanks to Sgt. Ash, the two Viet Cong squads on the second floor above Lt. Reagin are shaken.  Another VC squad sacrifices itself so that these squads can pull back.  The VC hero moves in to cover their retreat. 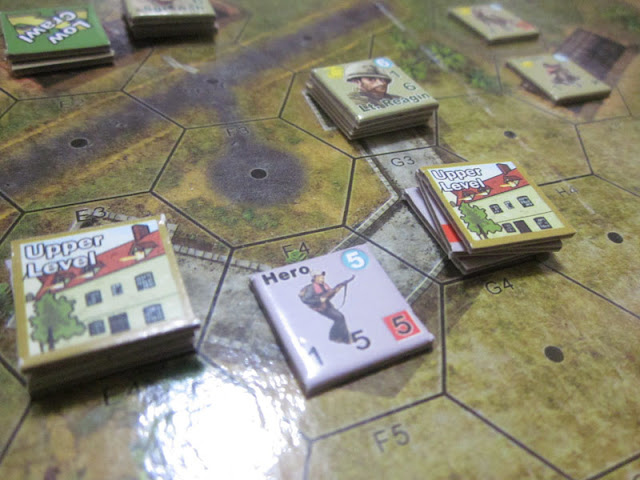 The US Marine casualties pull back towards Sgt. Ash’s position.  Ash also sends one of his squads to take the flank and protect the building where the US sniper is sitting. 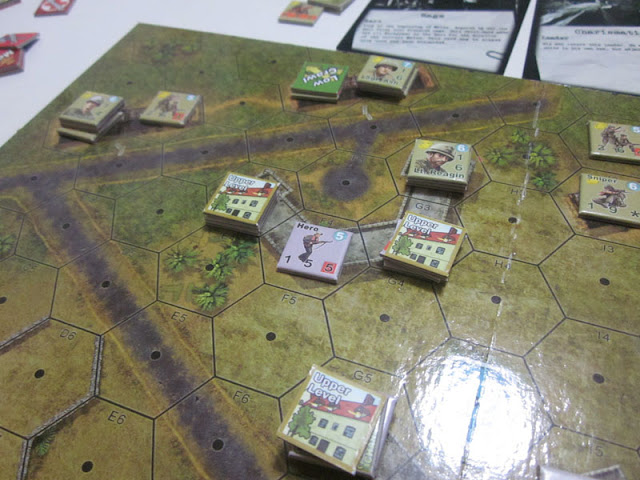 Lt. Reagin finally manages to take out the two retreating VC squads when the VC hero is forced to pull back to protect yet another shaken VC squad on the flank!  Sgt. Ash’s firepower is devastating. 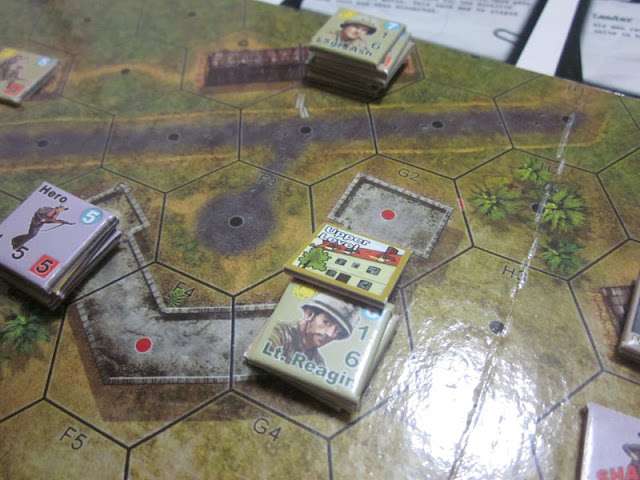 A VC squad rushes at the US sniper.  The VC squad take casualties but a hero emerges!  The hero is multi-faceted and gets two cards:  Ambusher and Healer.  The VC hero melees the American sniper, killing him. 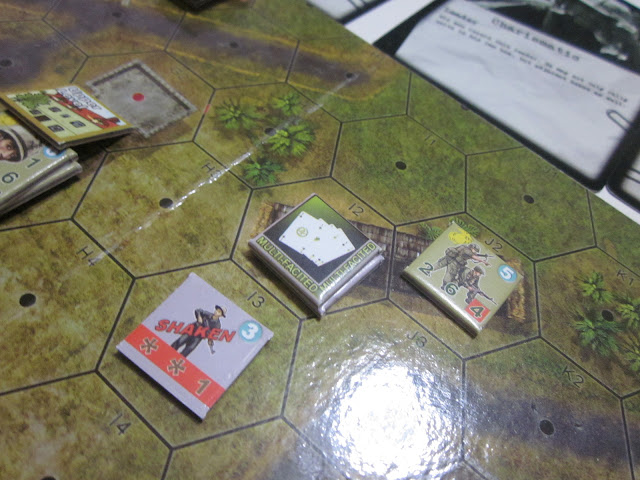 With little choice left, the USMC 2-6-4 squad goes ahead and melees the adjacent VC hero.  The USMC squad wins the melee soundly and the VC hero goes back in the box. 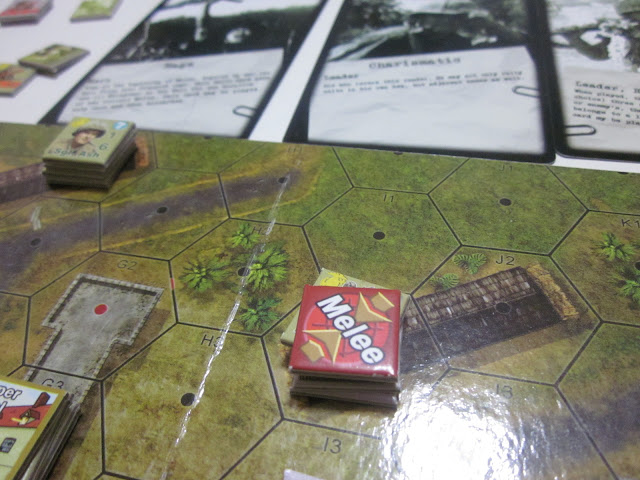 Taking the northernmost VC position has been a thorny problem for the Americans.  Going through the rear of the building exposes them to Dobie-san’s machine-gun team while going in front of the building (as seen below) puts them out in the open where the VC hero can fire on them.  The USMC decides to tackle the problem with lots and lots of machinegun fire, which successfully eliminates the VC hero protecting the shaken VC squads.  After that, Lt. Reagin moves in with his men and the building is finally theirs. 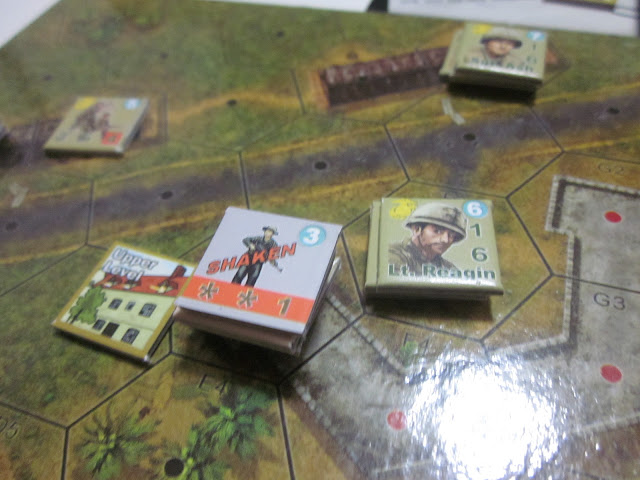 Throughout the first four turns, there has been an ongoing firefight between the US and VC elements in the west as both of them take turns spotting the other and exchanging machinegun fire, hoping to cause as many problems as they can for the other side.  The only real result has been the creation of a US hero with the “Veteran” skill card. 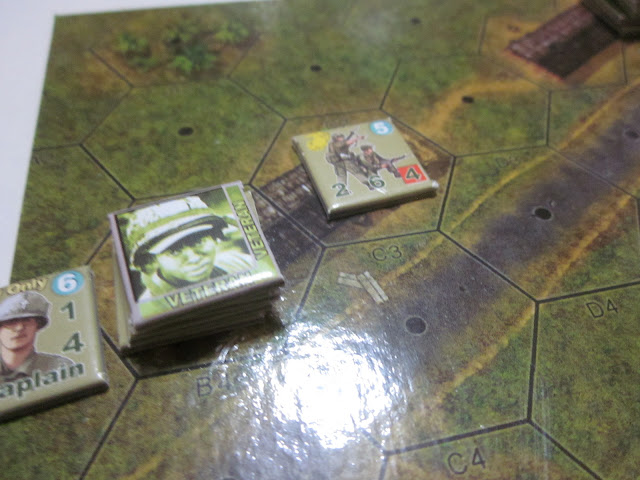 The USMC squads move up into the building.  Sgt. Ash, Lt. Reagin, and the US hero take their positions and prep for the final push on Dobie-san to the south. 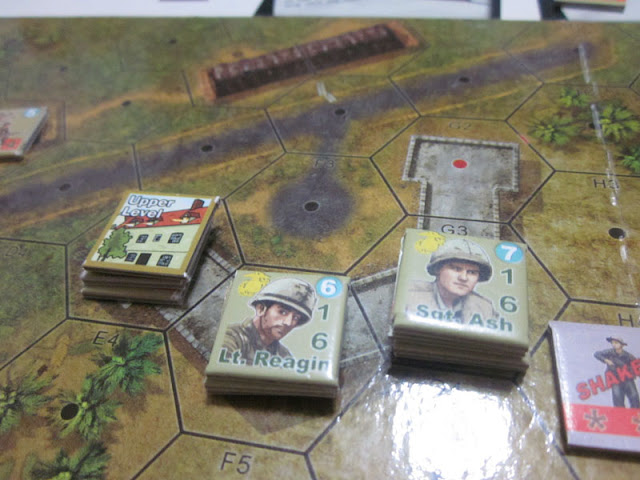 Sgt. Ash almost completely blows it as there is no one covering the US advance.  Dobie-san fires on him and inflicts major casualties on the Americans.  The USMC squad which melee’d the VC hero a couple of turns prior now moves down into the building where Dobie-san and his men make a final stand. 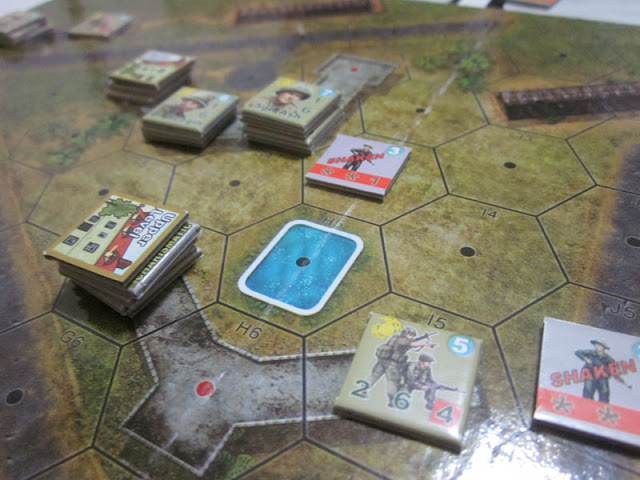 Arnat is unable to  do much except keep part of the USMC force at bay with opportunity fire.  Her LOS to the other American squads is blocked by a series of  walls to her right. 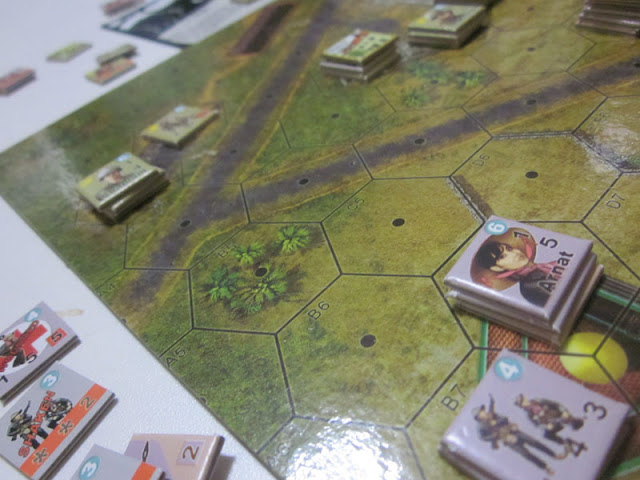 Sgt. Ash, whose squads have dished out a lot of pain and been on the receiving end as well, fire at Dobie-san after the USMC 2-6-4 that had infiltrated the building earlier is shot to pieces closing in on the enemy.  Ash and his men shake up Dobie-san’s squads and Lt. Reagin and his men move in for the melee. 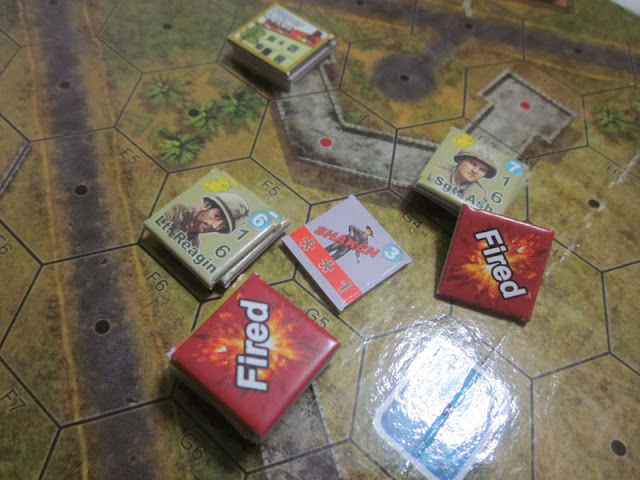 As part of a last ditch effort, Arnat moves up to the American-held building in the north, hoping to gain a foothold before the scenario ends. 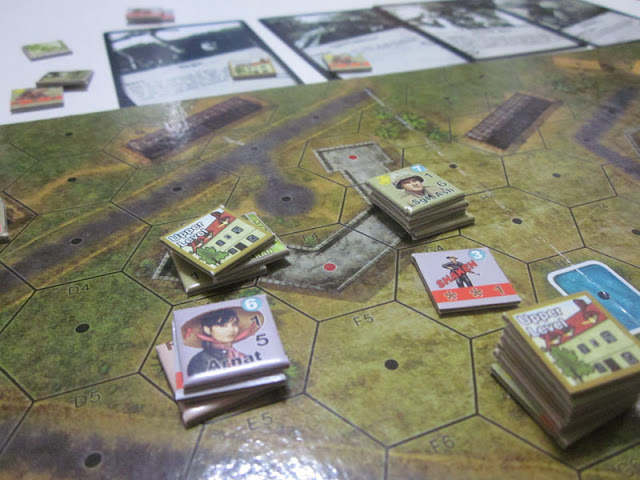 She gets adjacent to the building but the US wins initiative.  The USMC hero enters melee with Arnat and her VC squad. The hero loses but Arnat is locked in melee for the rest of the turn.  The Viet Cong are defeated as the Americans retain their hold on the five buildings they have under their control. 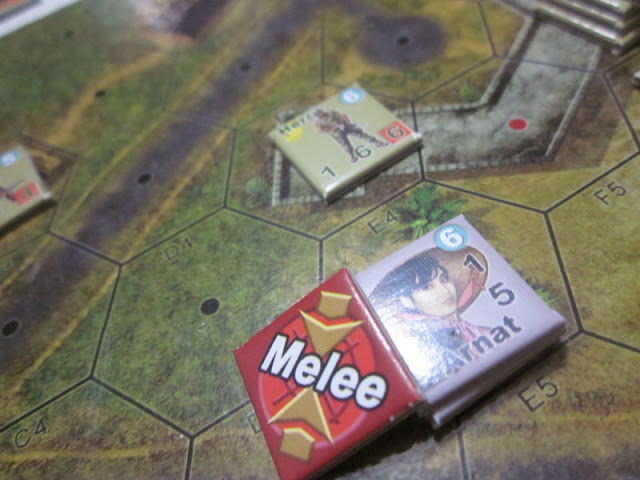 Great scenario!  It is fairly small and easy to play through in an hour or so.  The forces are nicely balanced and although the report may give you the impression that the US won easily, the truth is that it was very much up in the air until about Turn 6.  The US took a lot of casualties assaulting the first building with just brute force.  There was very little finesse involved and the VC were doing quite well until they had  a couple of lousy defensive rolls.  The inclusion of snipers in this scenario makes everything very tense.  There was a VC sniper who did very little (so I didn’t mention him in the report) but the US sniper managed a very good lone defense of one of the buildings on his own.

As the US player, you’ve got to really coordinate your attack and make sure that you stay out of range of the VC’s inherent firepower when moving.  You’re going to take casualties no matter what so be prepared to keep pulling back guys who need to be rallied.  The VC player should definitely set up in the upper floor of the buildings and bunch up your guys a bit to prevent them from being eliminated in melee.  Perhaps it would go much better if the VC gave up one of the positions and pulled forces back to protect the remaining buildings? It’s something I might try in a later playthrough.

The VC took some poor gambles here and ended up doing one thing it should never do, which is get into a stand-up fight with the US forces.   Those VC squads should pull back as soon as they bloody the US player’s nose.  I also couldn’t get the left flank (Arnat’s position) and the US right flank (with the Chaplain) going throughout the game.  I wonder what would have happened if I had pushed one side at the other.