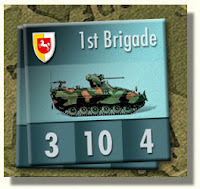 I really love LnL’s “Dawn’s Early Light”, an operational level game involving NATO and the Soviets slugging it out over a series of scenarios depicting WW3.

One thing that I think the game could use to spice things up a bit would be some more random elements to represent the chaos of modern war.  I haven’t fully tested this random event table so use with caution and modify as you see fit.  Have fun!

Dawn’s Early Light Random Events Table
Either player rolls 1d10 before the beginning of Phase 1 at the start of every day. Roll only once per day!

1:  Refugees:  The cities and roads are clogged with civilian refugees trying to flee from the fighting. City hexes cost double MPs to enter.  Road movement bonuses may not be used.

2:  Inclement Weather:  Airstrikes and helicopters cannot be used due to heavy rain and thunderstorms in the area.

3:  Strong Winds:  Chemical weapons affect all surrounding hexes of and including target hex.

6:  Command & Control Sabotaged:  Special Forces have disrupted the enemy command and control network behind enemy lines. The affected player’s initiative is chosen by the opposing player.  This must be done BEFORE the opponent rolls for their own initiative. Roll for which side is affected by this event.  1-3:  NATO forces  4-6:  Warsaw Pact