Mark H. Walker kindly made “Birds of Prey”, a bonus pre-order scenario for Band of Heroes. available for all to play last week.  You can download it from here.

In this scenario, the 101st Airborne meets up with the German Fallschirmjager patrolling the area near Carentan on June 11th, 1944.  It’s an infantry-only scenario that lasts six turns so it’s a great introduction to the LnL system, not to mention a nicely designed match-up between elite American and German units.

The Americans get six 2-5-4 squads with a couple of Satchel Charges and some BAR automatic rifles while the Germans get 6 units and some machine guns to match the Americans pound for pound.  Victory conditions are determined by number of buildings held by the end of the scenario as well as eliminated units.  Since the setup involves each player alternating their unit placement, things are off to a chaotic and unpredictable start. 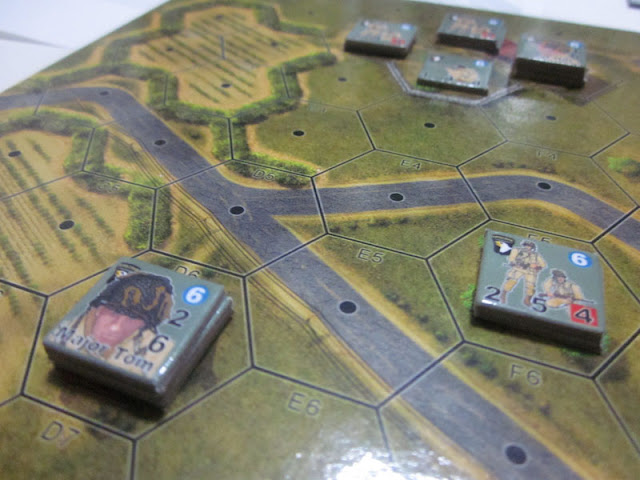 By the end of setup, the Americans dominate the west side of the board, grabbing the building down in the southwest… 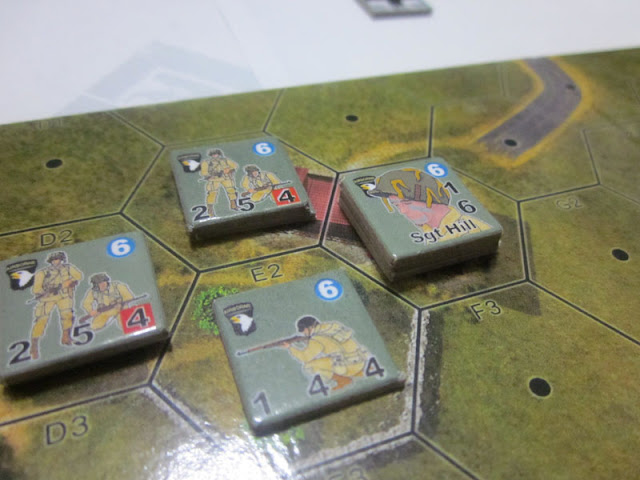 and a series of small buildings up in the northwest. 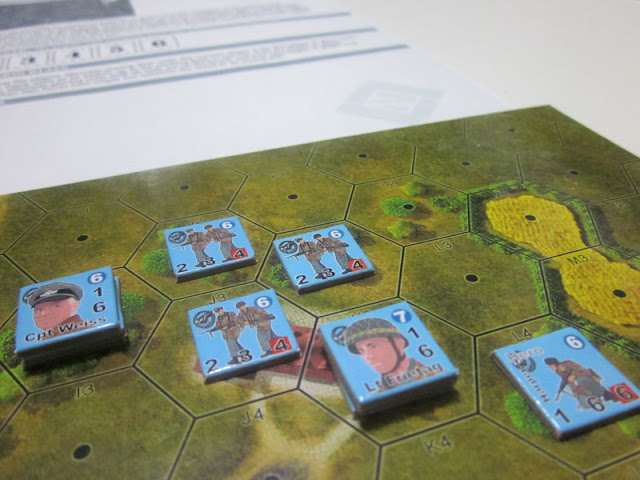 To the east, the Germans hold a large wooden building with thick forests to the north. 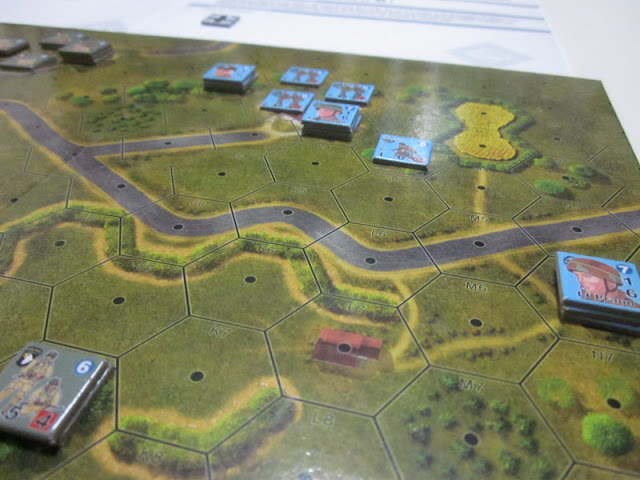 and they also have a small building far to the east. 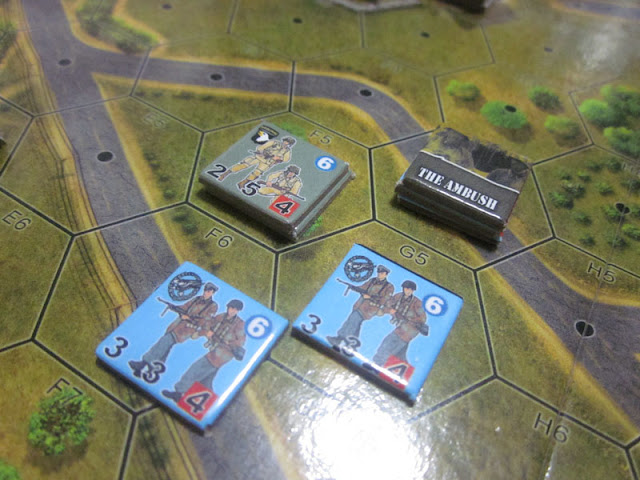 The Germans start off by rushing a squad towards an American squad near the center of the board.  The Americans fire but a German hero is created!  The hero draws a skill card and gets “The Ambush”. 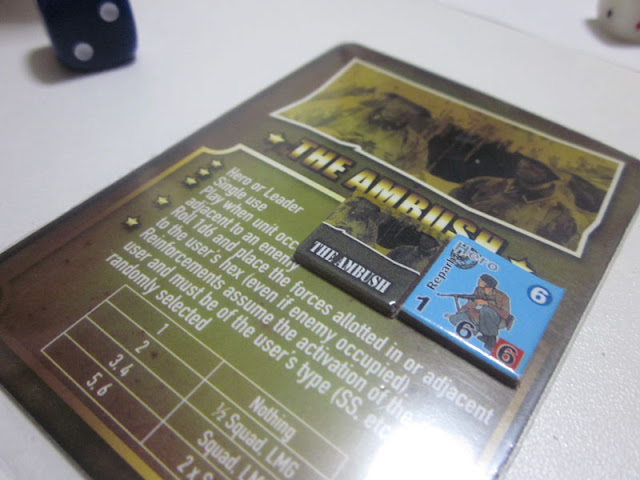 The German hero rolls for his ambush squads and gets a “6”!  Two 3-3-4 German squads are randomly pulled from the cup and they immediately enter melee with the American squad. 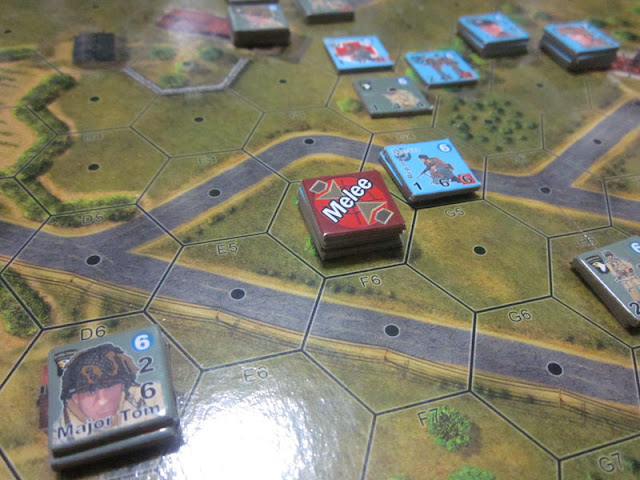 At close range, combat is extremely deadly but the Americans manage to hold on, even eliminating one of the German squads in the process! 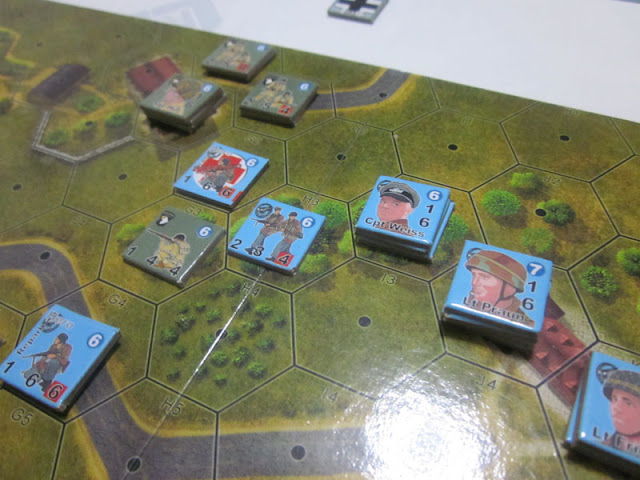 The Germans around the wooden building in the northeast decide to make a try for the Americans in the series of buildings to the west.  A hero makes his way to the American position but is wounded as he approaches.  The rest of the German squads start moving west towards the building. 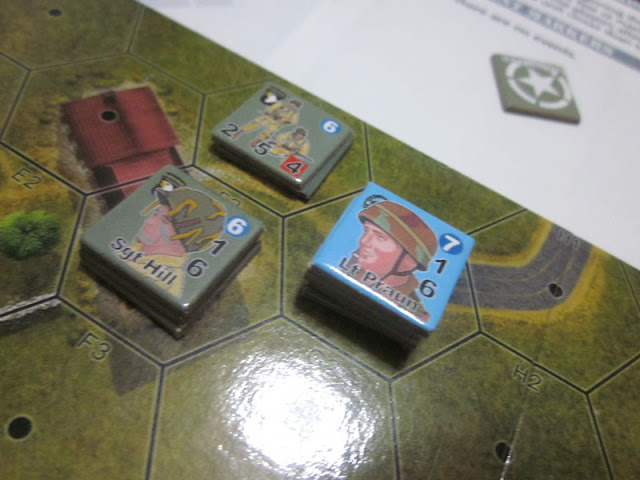 A pair of American squads moves out to get a better firing position at the approaching Germans.  Unfortunately, MG34 machine gun fire shakes one unit up and Lt. Praun and his men close in and destroy the American squad.  They are right next to the American position! 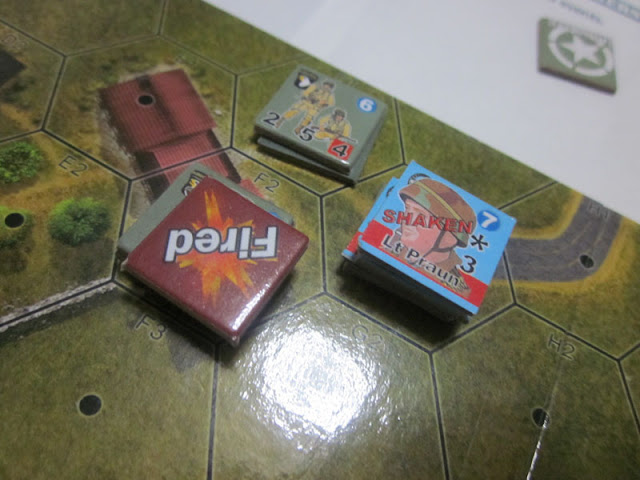 Too bad for Lt. Praun.  Next turn, the Germans lose the initiative and Sgt. Hill and his machine gun team rip into the adjacent Germans, avenging the death of their buddies. The nearest American squad melees the pile of Germans.  The Germans’ risky move has backfired badly. 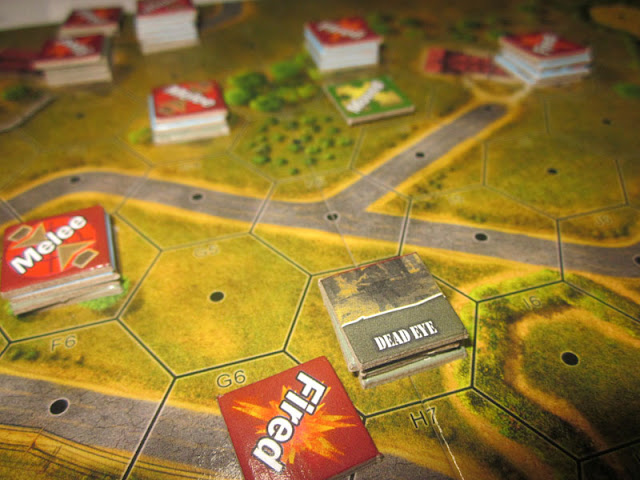 A handful of Americans move towards the ongoing unresolved melee in the center of the board.  Lt. Frietag shakes up the American squad as it heads west and a hero is created! 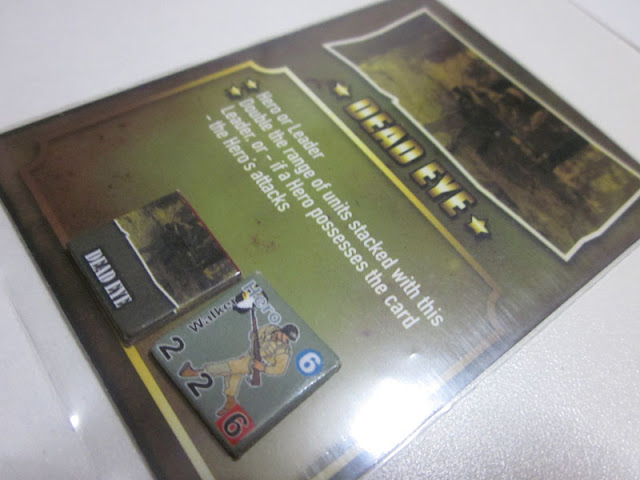 Cpl. Walker, a humble farmboy from some small town that no one ever heard of, is a dead eye with his Garand rifle and is determined to take out some Germans to avenge his brother’s death a couple of years ago in North Africa. 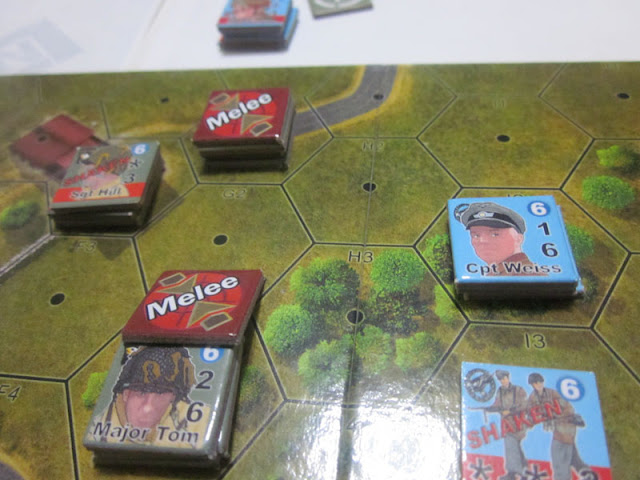 Major Tom and his BAR riflemen decide not to sit idly by in their house far to the southwest and get into the action.  They zip up north and melee a German squad trying to sneak up on the farmhouse.  Capt. Weiss has shaken the American inside and there’s no way he’s going to let down his men! 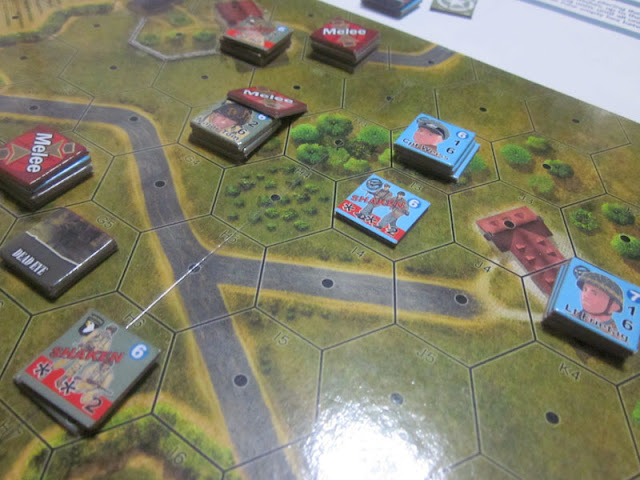 Down south, our humble hero, Cpl Walker, moves towards the melee between the Germans and the Americans in the center of the board. The melee has gone on unresolved for about four turns!  Neither side has been able to eliminate the other. Lt. Frietag’s MG42 opens up on Walker as he heads for the melee, wounding him.  Despite the bloody wound, Walker pushes on and joins his fellow soldiers in the fray. 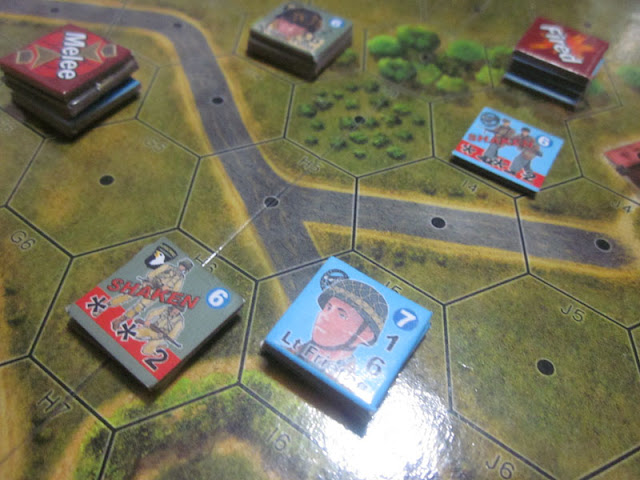 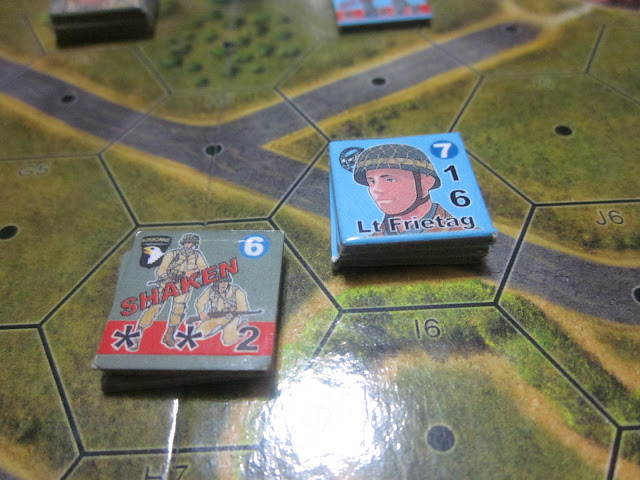 Lt. Frietag leaves the safety of the large wooden building and his men fold up their MG42 and follow him out.  They quickly eliminate a shaken American squad in melee. 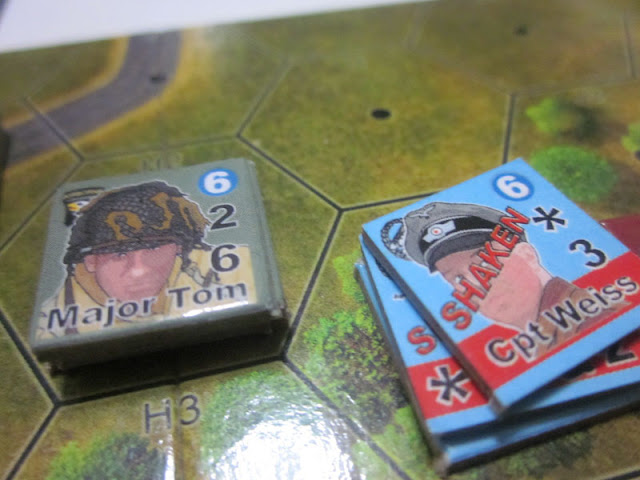 Up north, however, Sgt. Hill and his men have poured on very effective fire and Cpt. Weiss and his men are shaken badly.  Major Tom, fresh from his earlier melee, approaches Weiss and eliminates the pile of Germans.  Another devastating loss for the Fallschirmjager! 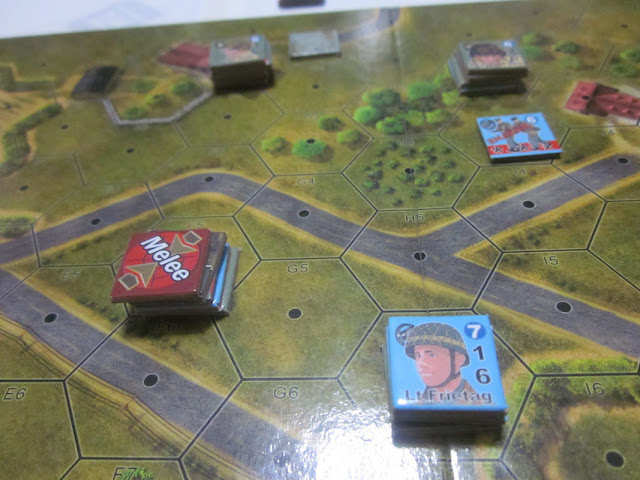 Looking at the board from the south, the Germans are in a bad position.  Only Lt. Frietag remains among the initial German forces although one squad is still (after 5 turns!) stuck in melee with Cpl. Walker and the rest of the paratroopers. 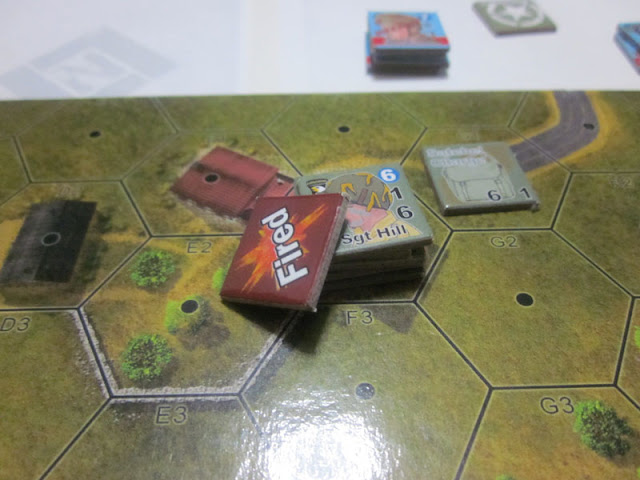 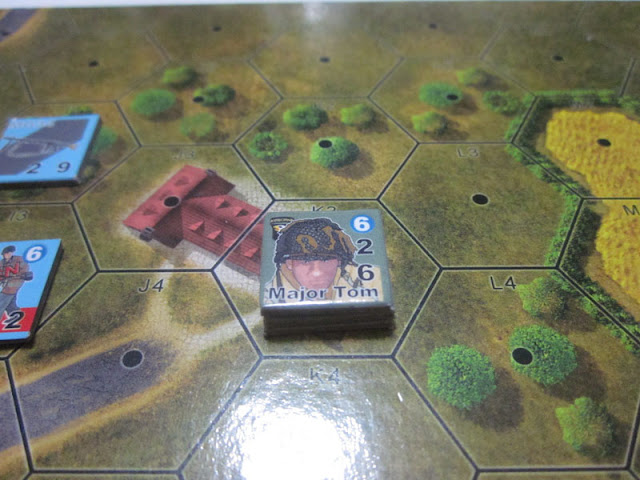 Major Tom moves into the abandoned German stronghold once held by Lt. Frietag while Sgt. Hill directs fire at the remaining Germans from his position far to the north. 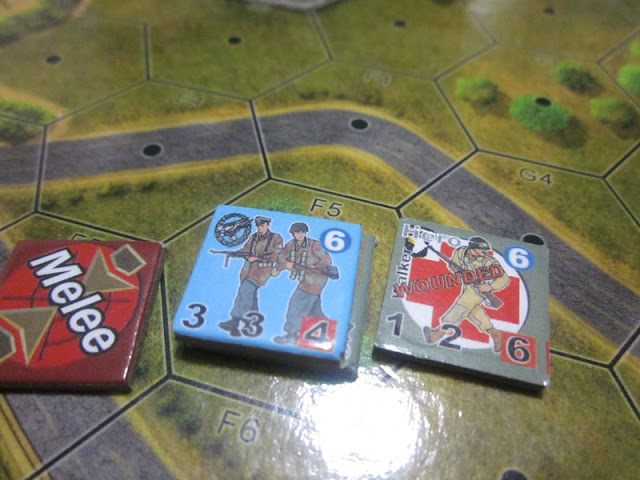 On the very last turn, the Germans finally eliminate the last American unit in melee.  Cpl. Walker, we hardly knew ye and your agrarian charm. 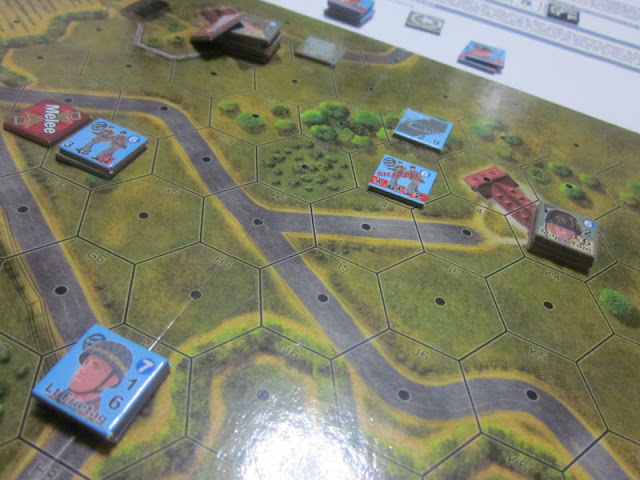 It’s the final bit of the last turn.  The Germans have nowhere to go and the Americans don’t want to risk losing their hard-earned gains.  Both sides call it quits for the day.

The stunning conclusion:  The Germans lost and badly.  The Americans took out 8 German units for 16 victory points and they also held on to 6 hexes worth of buildings to make it a total of 22 victory points.  The fallen Germans include two officers, one hero and several 2-3-4 and 3-3-4 squads.

The Germans manage to hang on to one building hex and take out 5 American units (1 SMC and 4 MMCs) for a total of 11 victory points.  22 to 11.  A lopsided victory to say the least.  I’d like to try this one again and see if I can’t find better ways to attack building strongholds with the Germans.  Rushing a large group of men adjacent to an American machinegun position ended in predictable results.  On the other hand, there were several wild cards in the game including a melee that went on for six turns, a number of heroes popping up unexpectedly, and some initiative rolls that could have resulted in very different outcomes.  Great stuff!