Here’s Kevin Sharp’s report from our game yesterday.  He fought like a lion as the commander of Easy Company.

Ok… Let set the record straight at the get go.
I’m the Allies. In fact, I’m the American player. Actually I am Easy Company.
Yes. Indeed.
E for Easy.
Not E for eliminated.
Not E for Eventually.
Not E for Exterminated.
When you see the word Company and the Letter E you think this:
So starting out on this scenario as my first exposure to WWII LNL, I figured this would be a cinch. The good guys always win, when you roll with Easy Co.
Turn1.
WTH? I start in Line Of Sight (LOS) with 2 of my 3 squads? No matter what one of them is shot at by that honking great MG the Jerries have.
We of course dodge a bullet, no one is hurt and we hurtle across the board, evading fire.
We ARE EASY COMPANY!!!
Well since this is a AAR, I’ll leave hooha out of it. I got a little carried away there! A quick look at the board reveals that we need to cover a lot of territory in 8 turns.
The Germans are fearfully set up with wonderful cones of fire. 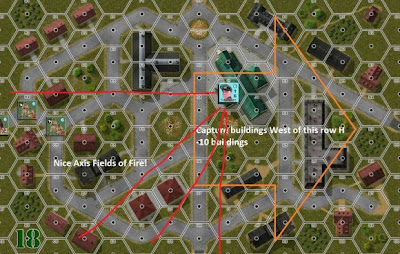 Capturing all ten buildings will be tough, but I think we can easily grab 6 or 7. I got lots of reinforcements coming, and he has to place his or lose them on his turn.
I think our plan is to push hard in the North of the map and also send a small force South to keep him honest.

Ok. Row H is in sight, my guys are gun ho and pushing up nicely. The T Shaped building will serve as my base of Ops to root out that pesky MG. Then its a walk down the boulevard. 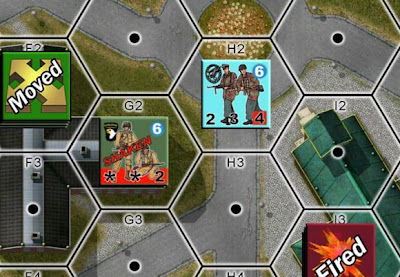 Oops, His MG tears my guys a new one. Then he pops the reinforcement across the way, AFTER I move. He then dashes across the street and pulls the Melee the enemy shaken routine. Sigh. Ok. I may have got a bit hasty on the moves, here.
This is however no problem. I can afford one squad, and we will Melee them and crush ‘em. but I still need to work out some way to get rid of that MG.
I need to obtain initiative next turn and swipe those guys hard. 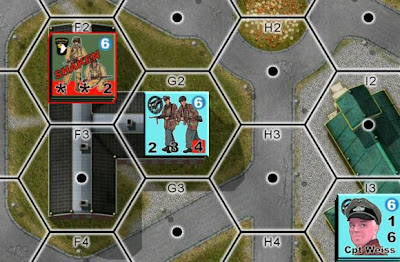 For Petes Sakes…..He gets init, of course fires and barely shakes my boys. Phew. That could have been really ugly. I move up and close assault those guys ASAP and lose one squad and take him out.
Ouch. But hey this is war and Easy company rolls hard….right?
But wait – what the hell is this.  Yes reinforcements can go in ANY HEX….H2. 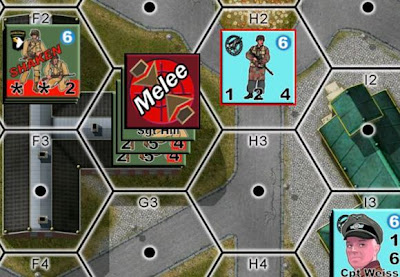 The arrival in H2 is the death knell for those 2 squads., the pimple faced little recruits just crush them as my guys are shaken..I have now lost nearly 50% of my forces and made ZERO head way.
With the Zones locked down, I must admit I have underestimated the terrain, the player and the capabilities of the Wermacht.
I’m going to need to reassess my goal.  If I can get 5 of the hexes I can win. But I cant afford any more losses. shit just got real Easy Company.
Over view at Turn 4: 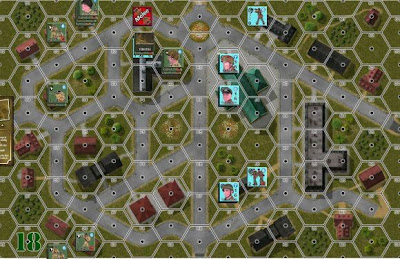 Two turns fly by, and my teams and squads are either reduced, shaken or useless. I’ve now turned the music off, stopped drinking my martini and begun focussing. The risk of a 100% Axis blow out is now a reality. Jerry has prevented the 101st from getting into its rhythm, whilst the men of Easy Company have paid a dear price for sloppy movement, no overwatch and all the other things that YOU MUST DO to NOT DIE in this WAR!!! 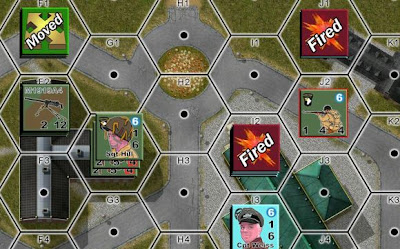 I hate to do this, as it is an expensive way to use men, of which I now have too few. But I send the 1/2 squad out as bait. Jerry, wisely holds fire. Lucky for me. All I really need is one guy in his rear to at least get a pyrrhic VP hex, I pop the unit into the Snipers hex and relieve a little pressure on Sgt Hill and co. 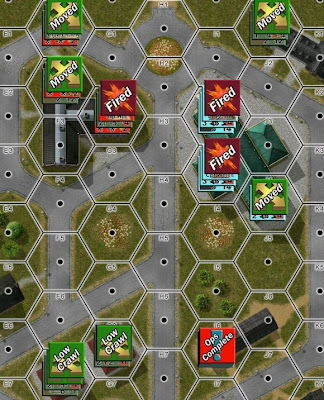 At the end of Turn 6 The Jerries have torn thru the men of Easy company, with furious fire. 50% of the men are shaken, or reduced. It is time to break loose of concede. If I can recover some men for the last 2 turns then its all or nothing. 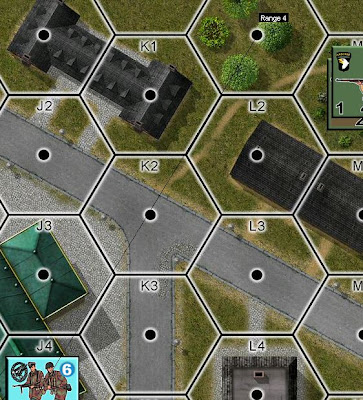 I finally catch a break, most of my guys recover, and the Germans were so focussed on the primary force in front of them, that I sneak by and get into the rear to capture some building hexes. He misses a Opportunity fire chance, thankfully. 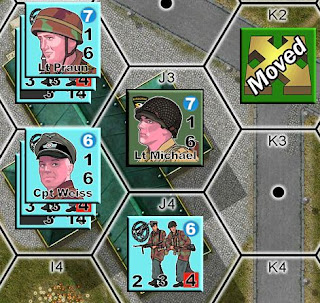 Lt Michael rushes the building. He is doing two things. 1 absorbing fire, and two moving a unit out of LOS of the guys in the South. He will die. He does it for his men. For the mission. for freedom. Ok.. He does it because I either have no idea what the hell I’m doing or I’m desperate!

My last live hero, rolls out take on the Jerry solo, or actually to capture a building hex! He lies in the street in a pool of blood.
The rest of Easy companies squad, now launch an assault and throw the satchel charge into the building (was that played right?).

They clear the building, dying in the effort.
The end of turn 7 sees more fire and casualties, the death of Lt. Michael and the reinforcement of K1. The situation at the beginning of Turn 8, is still tight. 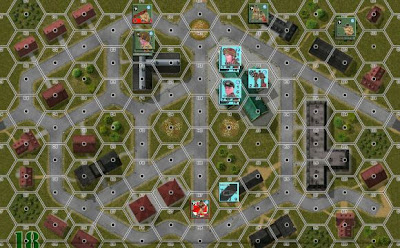 Easy has suffered horribly. They have a wounded hero, a Sgt with one squad, a reduced shaken squad in the street, 2 squads all alone and a 1/2 squad which can capture 2 more buildings.
We have however redeemed the game, albiet at a great cost. 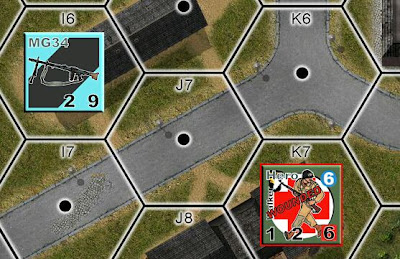 The Hero picks up two building hexes. That makes 3. Now the cat and mouse angle comes to the fore, I need to be able to move my guys without risk of being shot last.  Like any good game this baby is going down to the wire for either a draw or a German victory. 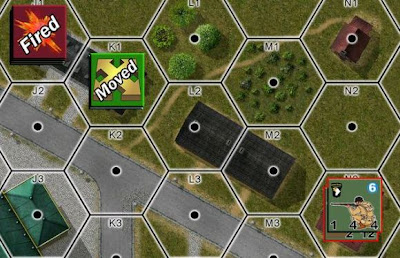 2 more hexes! M1-M2-N3. phew. ok. That is a net 3 VP hexes as his squad moved across the road and contestJ1/K1…why the hell didn’t I put a guy in each hex? UGH!!!!
Ok. Now for the big building. I need one more building or one of his contested for a draw. Huzzah. I drip feed the half squad towards the green building and he ignores it. I melee the hex, I fail to kill a unit, and so does he at great odds. That nets it out to 4 buildings controlled each and 2 disputed.
Easy company is a shell of its former self. This platoon in particular is a mess. Then men hunker down and await reinforcements.
Good game Brad, well played and I am officially a fan of WWII squad level tactical combat in LNL!

-Glad to hear it, Kev!  Thanks again!