All content published herein is copyright 2017, Brad Smith. Images are either stock photo standard rights or public domain. Please contact me at this domain if you wish to use any of the material or images posted to this site.
I recently ran across an article about “The Battle of Mogadishu” in October of 1993 and suddenly realized that next year will mark its 20th anniversary (just in case you weren’t feeling old enough).  For whatever reason, that’s all it took to make me choose LnL’s “A Day of Heroes” as my next game purchase.

The events of the October 3, 1993 battle in Mogadishu which involved US Army Rangers, Delta, Navy SEALS, the 10th Mountain Division, and forces loyal to Somali warlord Mohamed Farah Aidid have been popularized and depicted both in Mark Bowden’s excellent book, “Black Hawk Down” and a 2001 movie of the same name. With “A Day of Heroes”, Lock ‘n Load Publishing appears to have done a fine job of adding to that retelling by using the Lock ‘n Load squad-based combat system for recreating the events of that day.

Yesterday, I received my copy of the game and I took some photos as I went through the unboxing. I’m going to go through it step by step and just talk about my impressions along the way.

First off, the cover of the box is colorful and the photo has a nice sandy color filter that fits the theme quite well.  Although the box is not glossy, it seems quite sturdy and should hold up over time and wear.  The size of the box is fine.  It has enough room for all the contents and a little extra, should you need it.

There is one sheet of counters in the box, which I kind of like since I’m a big fan of small scenarios and my current collection of counter boxes is getting too big anyways. The counter sheet had no errors on it.  The actual counters themselves are standard LnL counters with clear information.  One thing that surprised me was the use of actual photos of people for the leader counters, which might reinforce the sense of playing through recent events that really did happen.

Below the counters were the Player’s Reference chart, which is on plain white paper. Although this is not quite as impressive as the glossy reference charts that LnL now publishes with its games, it’s understandable since DoH was made when the company was starting out and they probably didn’t have the kind of money to do that kind of thing at the time.  In any case, it’s well organized, easy to read, and functional.   A separate terrain chart is included with the game too.

After that are the scenarios themselves.  They’re printed on paper and don’t have the same color and gloss as the newer LnL modules but that’s fine with me.  They’re easy to read and provide all the information that’s required for setup and play.  The actual scenarios include approximations of historical events of and relating to the October 3rd battle in Mogadishu, including an ambush of Pakistani forces in June of that year and an engagement between the US and Somalis in November of ’93.  There seems to be quite a variety of scenarios in terms of both size and complexity.  “Chalk 2’s Run” is a learning scenario with a handful of forces on either side while larger battles like “Retribution” involve more than two dozen units units on each side, with tanks, technicals, HMMWVs, and helos. 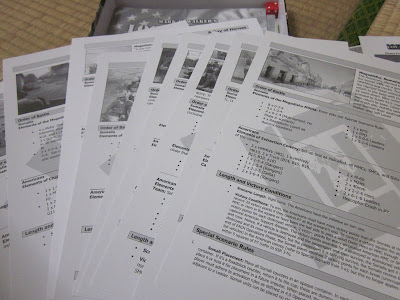 There are two rulebooks with the game.  One of them, of course, is the standard v3 rulebook included with all LnL games in the series.  The other rulebook is the module rules, of which there are 5 pages.  Some very interesting ideas in the module rules include how mobs work in the game.  There are also some small differences with how the game works in respect to the map, which uses squares instead of hexes. Everything is clearly explained, however, and there are examples to help light the way.

Last, but not least, is the actual map board.  The map is mounted on thick cardboard.  It is illustrated quite nicely with cluttered streets and dirty sand.  It looks very much like Mogadishu as depicted in print and movies.  There is a helpful turn track on the map board as well as some rules regarding mobs and roadblocks.  A handy terrain guide runs alongside this information.

Overall, I’m pretty excited to start playing A Day of Heroes after checking out the contents.  Looks like another first rate job from Mark H. Walker and the folks at Lock ‘n Load.