Last week, I talked about some fairly basic principles behind LnL’s Corps Command:  Dawn’s Early Light and I urged the Soviet player to consider moving rather than fighting as the best course of action most of the time.  Today I’m going to go into this a little deeper and talk about how the Soviet player can use movement to his best advantage.  Let’s start with a fairly common situation that usually happens in most scenarios: 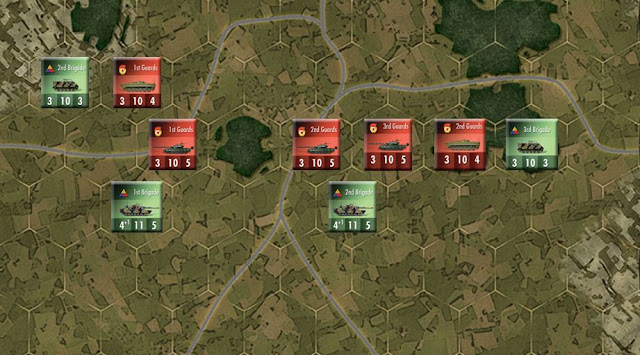 This shot is from the right side of the board and it’s fairly early in the game. The Soviets are trying to push southwest (lower left) towards Eisenbach with the 1st Guards Tank Division.  The American player has made some good decisions about defensive positions by placing infantry in the appropriate terrain and by tightening the zones of control for each unit so that the Soviet player cannot just barge down south and take the city.  Zone of Control is vital in this game because it determines not only who you can attack but also how the enemy can move.  All enemy units must stop as soon as they enter a hex where the other player projects a zone of control (a unit’s surrounding six hexes).  That means the Soviet player can move only one hex maximum towards his goal right now – even if he has an activation number of “5” (which gives him 6 movement points).
The Soviet player has made some good decisions here too.  He’s got infantry next to infantry to take advantage of terrain and defensive fire while tanks are fighting in the open.  Everything looks fine.
Given enough time and pressure, odds are very high that enough Soviet attacks, if focused properly, will lead to one of those NATO units getting destroyed.  My money is on the 2nd Brigade US tank division cracking first but we can’t say for certain.  What should the Soviet player be doing to ensure that his breakthrough is complete and he doesn’t blow his chances of winning after taking out that 2nd Brigade?  He needs to move and start setting up his own ZOCs behind the NATO units to stop them from following the breakthrough. 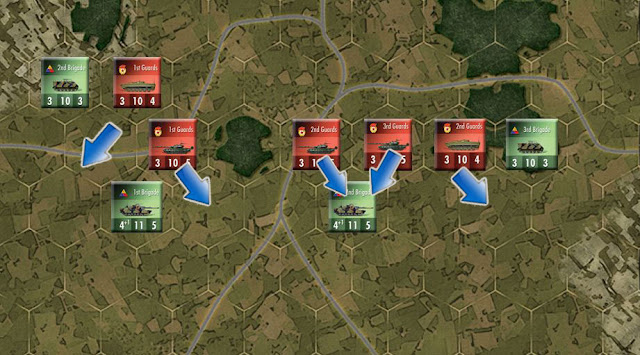 So let me apologize first for my terrible Pshop skills.  What I’m illustrating here is how the Soviet player is using selective focus to hit the most vulnerable part of the NATO line, the 2nd Brigade, while slipping past the NATO player with his other units and getting ready for that breakthrough punch so that the US units cannot pursue the breakthrough elements as they head for their objective.
Over on the right part of the board, we see the 2nd Guards Soviet infantry with the US 3rd Brigade infantry.  There is no advantage to the Soviets engaging in this battle.  Even if the Soviets manage to destroy the US infantry, their comrades will have to push through rough terrain with a movement penalty and they would be going far out of their way to get to the objective in the lower left.  Clearly, the Soviet infantry should focus solely on moving out of the 3rd Brigade’s infantry ZOC and either go southwest (lower left) for the objective or (as shown) move southeast and set up its own zone of control so that the US infantry cannot reinforce the 2nd Brigade and it cannot pursue any breakthrough or rush to the rear in an attempt to reinforce Eisenbach.
Likewise in the left part of the picture, the NATO forces are simply too strong for the Soviet to really engage.  With the US in better terrain and the Soviets caught between the munchers of the US 2nd Brigade infantry and the US 1st Brigade tanks, the Soviets will simply get worn down and destroyed if they stop to fight here.
It is much better for these Soviet forces to use their movement to get between the two US tank brigades and cut them off from reinforcing each other.  The Soviet infantry might also try to get past the 2nd Brigade infantry if possible and either go for the objective or, if things are looking good with the battle against the 2nd Brigade tanks, get behind the US tanks and infantry and stop them from a pursuit southeast.  The 1st Guards should probably also try to get a unit or two on to the road to really help prevent the US from pursuit of breakthrough units.
There are many ways you could go with this idea.  As long as you remember to protect your success by using ZOC against NATO to prevent reinforcement or pursuit and you don’t fight meaningless battles, you’ll probably be quite successful as the Soviet player.
A smart NATO player will circumvent this style of play by a.) using layered and moving defense instead of linear and static b.) setting up his initial units far enough from the Soviet objective to prevent quick capture but close enough to the rear to allow for quick reinforcement and rotation of fresh units to the front/damaged units to the back and finally: c.)  dispersing hits at various Soviet units rather than focusing hits on one or two units.
In each case, your objective is to be the water, not the rock.  If you want to be really good at Dawn’s Early Light, you’ve got to think about how to keep your own forces mobile while denying terrain and movement to the other side.  Do that and the dice will surely follow. 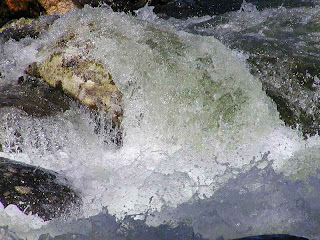