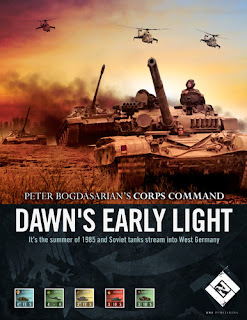 I’ve been getting back into Corps Command:  Dawn’s Early Light recently and here are some things I’ve started to understand about different Soviet and NATO strategies.  I’m writing this article as advice for beginners to the series.  I’m definitely not a tactical genius (as my opponents will surely attest) but I think this is a good basic guide for those who are interested in this under-rated gem of a game.

Soviets:  I used to lose as the Soviets all the time.  The reason was that I would basically just run up to NATO units and hammer away on them until I destroyed enough units to make an advance.  If you’re very lucky, this strategy might work but the inherent NATO firepower advantage means that you’re playing into their hands by adopting this strategy.  You might take out a few NATO units but your Soviets will be so utterly decimated by that time, you won’t have enough strength to take your objective.

In order to win, the Soviets have to move.  A good NATO player will try to slow down the Soviets from reaching the objective through interlocking zones of control (ZOC).  A good Soviet player will use a “5” activation to maneuver his units out of those NATO ZOCs and towards the objective.  If you ever have to decide between attacking and moving, always always choose to move.  The Soviets need to have a laser-like focus on the objective in order to win.  During night turns, always opt to move rather than repair units.  The Soviets usually have reinforcements coming in behind them so don’t worry about repairing your losses.

For the Soviets, the most powerful asset is artillery.  It gives you a much needed bonus for assaults, especially when you’ve got a recon unit to add its bonus to your attack.  Soviet units always take a pounding and lose strength due to defensive power so artillery can basically mean the difference between winning and losing.  Sure, it’s only available for one impulse but used correctly (ie. at the objective), it will help immensely.

When you reach the objective, your setup is crucial.  For obvious reasons, most of the first units that reach the objective are the most damaged ones.  Take the extra impulse to maneuver these units to the rear of the objective, even if it means you can’t attack immediately.  This helps to make way for the fresh units coming up behind you to get to the objective and hit them hard.  There really is nothing more frustrating than pounding away at a stack of infantry in a city with a “1” strength tank unit while your fresh infantry reinforcements sit uselessly behind you.  If time is an issue, however, you may have to just take your lumps and run headlong into the objective.

Try to split objectives up by regiment.  The Soviets can stack three units from the same division in one hex while they can only stack two units from different divisions in one hex.  Obviously this makes a big difference, especially in the aforementioned situation when you want to bring maximum firepower towards an objective.

Lastly, the 2nd Airborne is a really great asset because it can be dropped pretty much anywhere on the map.  This asset is most effective when NOT used.  It keeps the NATO player guessing when and where you’re going to use it and it can effectively prevent NATO from sending rear units forward to help reinforce the front.  In the first scenario, the 2nd AB asset basically forces the Americans to keep some units near Eisenbach and the 1st Panzer to keep a brigade of tanks sitting uselessly at Stahlhammer AFB.  They can best be described as the land equivalent of a “Fleet in being“.

NATO:  The most important thing for NATO is to just keep the Soviets at bay for as long as possible.  With limited numbers of units, their best hope is to delay and hope for help in the form of reinforcements.  Assets that help damage the Soviets (artillery, for example) are fine but the Russians are usually being reinforced with new waves coming behind them.  It’s best for the NATO player to have assets that help him keep the initiative.

Signal jamming, for example, is a great chit that allows the NATO player to select his own activation number.  This means that you can use the chit to select a high activation number and speed your reinforcements from the rear to the front.  Alternately, you might choose a lower activation number to juggle your infantry around as the Soviets get closer to city objectives.

Airstrikes are a great way to reduce entire stacks of units and should almost always target anything with a recon brigade.  Recon units help give the Soviets a slight edge in damaging your units so removing this hard-to-kill threat as soon as possible is essential.

NATO units at the front should remain largely static until damaged.  Locking up Soviet units through zone of control forces the Soviet to choose between moving one measly hex or attacking.  Ideally, the Soviet player is going to lose lots of units to defensive fire and in the course of the average game, this will happen a lot.  To really seal the deal, however, you need to think carefully about terrain and how your units work in different places.  Inflicting defensive fire on 2,3 and 7 will certainly help wear down the Soviets until they reach the objective.

Lastly, it’s important to use the last couplet of every day to return damaged units away from the front and recycle undamaged units towards it.  If your units are in a zone of control during the recovery phase at night, you can only recover on a “6”.  But if you have damaged units out of that recovery zone, there’s a much better chance (“5” or a “6”) to get your units strength back up.

Make the Russians fight for every single inch of ground and only concede it when your units are heavily damaged.  Even a -2 Panzer brigade is much more use to you than a dead one.