The twisted wreckage of Syrian tanks surround Team Azzam as it makes a final bid to escape a Syrian trap and capture the town just a few miles to the north.  Can they make it?

The Israelis manage to blast away the last of the assaulting tanks thanks to lucky die rolls and double-activating for multiple turns.  The Syrians have managed to assemble their remaining tanks for a push at the lone Soltam sitting in the city objective.  Two Syrian T-72s provide overwatch from afar.   Time is quickly running out for the Israelis. 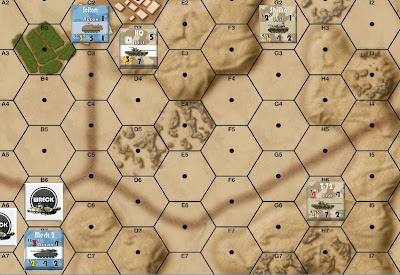 The Israelis activate and the Soltam fires with its HE at the Soviet tanks, managing to disrupt it.  The Merkava HQ lets go with HE artillery on the Soviet HQ position, disrupting the other tank platoon with the HQ.  The rear Merkava tank platoon is sent forward to help secure the city…
…and makes it to B4 before it dies under a hail of Opportunity Fire from the Syrian T-72s in hex H6.
The Israeli HQ sneaks past and manages to avoid being hit by the remaining T-72 platoon in H6.  Only two hexes from the objective.  The Syrians activate at the end of turn 8 and their HQ atop D2 manages to clear its disruption, close assaulting the Israeli Soltam but somehow not destroying it. The game hinges on Turn 9.
Turn 9 starts with an Azzam activation.  The HQ makes its way to C3 but is hit by Syrian opportunity fire from H6 for a reduction.  The Syrians activate next and fail to hit the Israeli tanks again.  One more activation could win it for the Israelis.
And with that came the end of turn 9 and the game.  The Israelis has failed to take their objective.  The Syrians, very battered and maybe not so thrilled about it, are the victors by a small margin.  The use of opportunity fire was key here.  Also, it’s important for the Israelis to deal damage to the Syrians before they make a run for the city.
This was my key mistake as the Israeli commander and it allowed those T-72s to swarm my tanks.  The first part of the Israeli strategy was quite nice and the Syrians reacted well to the Israeli mistake by quickly moving their forces to the west and setting up traps for the Merkavas to walk through.  A good deal of luck on the part of both sides made it a very interesting game until the very last turn.  This is a great scenario.