Today, I’ll be giving a very brief report of a scenario called “The Road to Armageddon” set in the World at War universe.  This scenario brings in the Israelis and Syrians for a nicely set up slugfest. The Israelis get 3 platoons of slow but tough Merkava tanks and an F-4E Phantom for air support. 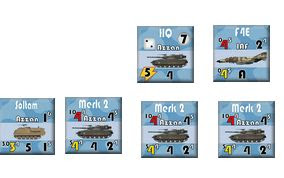 The Syrians are the defenders and the Israelis’ job is to take the city hexes in the northwest corner of the map, which are outlined in white. 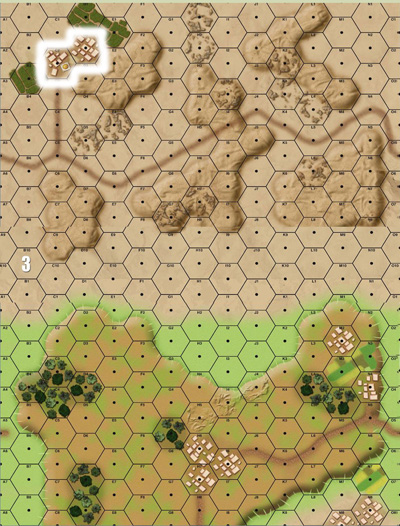 The Syrians set up on the hilltops in the center of the map.  This covers the approaches quite thoroughly.  If the Israelis make a dash for the town, the Syrian T-72s will close assault them and destroy them easily.

The Israeli commander, not having been born yesterday, sneaks his units on the map from the southeast and travels along the large hillside, which provides complete cover from the Syrian T-72s.

The Syrians pressed on and sent six platoons to close assault the Israeli Merkavas.  The Merks were hurt but the T-72s were reduced mostly to wrecks.  It was incredibly intense!  During the confusion, the Israelis managed to sneak the Soltam APC up to take the objective.  Continued in Part 2.