All content published herein is copyright 2017, Brad Smith. Images are either stock photo standard rights or public domain. Please contact me at this domain if you wish to use any of the material or images posted to this site.
The Americans set up in Eisenbach and Bergpfigel to the west. The Soviet objective is to capture any two cities on the map. Unfortunately for the Americans, the Soviet commander has also pre-designated Eisenbach as a drop zone for his paratroopers. They land in the north of Eisenbach and on the hill to the south.
American anti-aircraft manages a poor job of taking out Soviet transport planes over the drop zone. Almost all of the infantry, save for 1 platoon, land intact.
After landing, the Soviet paratroopers spread out and start seizing key objectives in Eisenbach and the hill to the south. 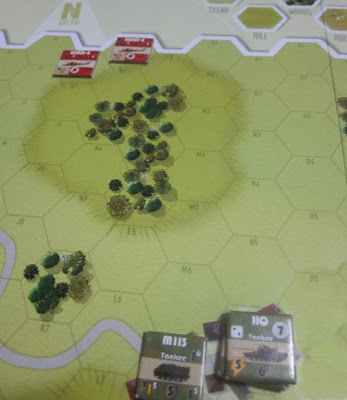 Soviets get lucky again as the 69th Airborne Helicopter Division is activated and swoops in on the battlefield behind a hill north of Bergenpfigel. 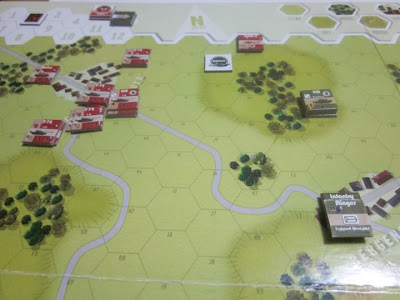 The Soviet 1st Tank Division enters the fray from the west. The American M1 Tank platoon has set up shop on the hill to the north of Bergenpfigel in an attempt to set up an ambush. 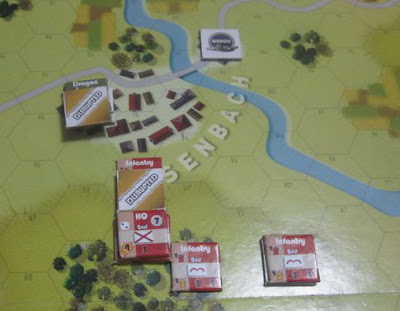 Soviet 2nd Airborne activates again! What a lucky day for the Soviet commander. The infantry take out the M48 Chaparral on the east of the hill. They also move into the west of Eisenbach and destroy the TOW Jeep support. The Americans are reeling. The fighting in Eisenbach City turns brutal as the American infantry fights tooth and nail to hang on. Team Bravo’s HQ in the north east of the city is turned into flaming wreck by the two Mi-24 Hind helicopters to the west (not shown).

A wide shot of the situation. The American infantry in Bergenpfigel in the center of the shot with the Soviet 1st Tank closing in from the west. On the right hand side, you can see the Soviets 2nd Airborne Division on the hill south of Eisenbach. It’s only Turn 2 and the Americans are in very bad shape.It’s a bit hard to see but hiding behind that hill way at the top of the map are both Soviet Hind helicopters. 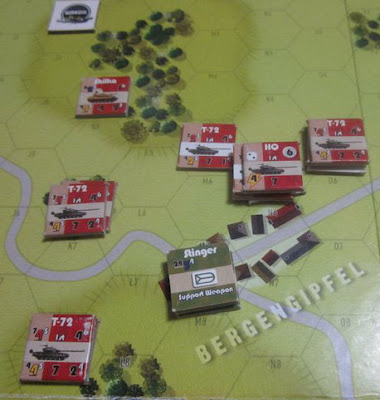 The Soviet 1st Tank eliminates the American Team Yankee HQ after some hard fighting. The only problem is that the American infantry in Bergenpfigel is holding out in the city and will almost certainly inflict heavy casualties if the Soviets try to enter with only Armored Fighting Vehicles. 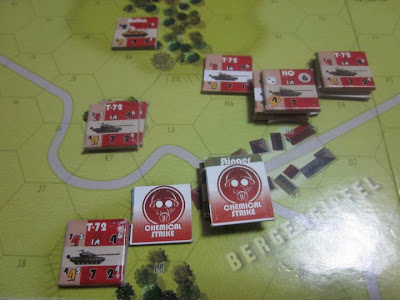 The Soviet commander, knowing that time is running out and the American AH-1s are on the way to even the score, takes the quick route and orders massive chemical weapons strikes on Bergengipfel. The horrors of chemical warfare are unleashed and kill the unprotected infantry in the city along with the all the civilians.
The Soviet 2nd AB Division to the west takes Eisenbach after another hard skirmish. The American AH-1 Cobras arrive but there is no one on the ground to support. The Soviets have claimed both Bergengipfel and Eisenbach, giving them a complete (and depending on your view of chemical weapons, hollow) victory. 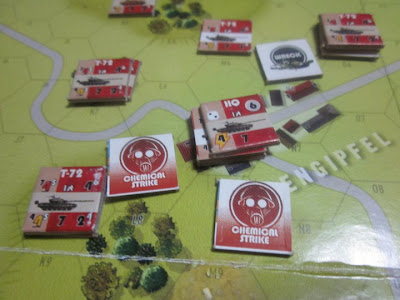 Soviets enter Bergenpfigel and destroy the remaining American infantry. Entering so soon after launching a chem strike causes some casualties on the Soviet side, but since the Soviets are protected by tanks, it’s not as bad as it could be.
I was surprised at how complete the Soviets dominated this scenario and, at first, I thought I had read some rules wrong or something. However, it seems that the early activation of the Soviet 2nd Airborne along with some good guessing about the American setup around Eisenbach allowed the Russians to seize the initiative and create utter chaos in the American ranks. Landing in and around the city left the Americans with no ability to exploit the range of their weapons on the Russians.
In this scenario, I was much more cautious with the Mi-24 Hind helicopters and it paid off. I always kept both Hinds well out of range of the American ground units and having the Soviet 2nd AB eliminate the M48 Chaparral early on basically allowed the Russian helicopters the room they needed to maneuver for their shots. You’ve got to treat helicopters like long-range snipers rather than tanks or they will die very quickly.
Lastly, I never really enjoy winning with chemical weapons in a scenario. It always seems like a bit of a cheap victory. However, I think this is pretty close to what probably would have happened given Soviet doctrine basically viewed Chem Weapons as intermediate weapons rather than strategic ones.
Had the Americans managed to hold on for just one more turn, they would have gotten some major air support from AH-1 Cobras. Also, the Soviet Hind helicopters were about to be recalled back to their base for refuel and re-arming on that turn. I probably could have held off the 1st Tank from taking Bergenpfigel but this result, I feel, holds close to the reality of modern warfare and that is what makes this game series so great.