All content published herein is copyright 2017, Brad Smith. Images are either stock photo standard rights or public domain. Please contact me at this domain if you wish to use any of the material or images posted to this site.
Without any further hesitation, let’s begin with the strange tale of how Klappebruck was won and lost. 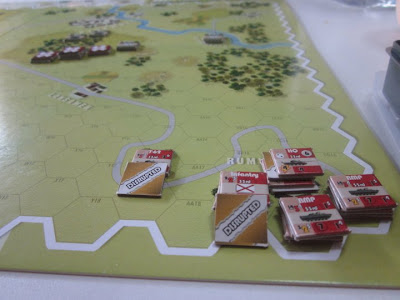 The Soviets take their lumps from the Americans’ long distance fire. It’s enough to be annoying but the Soviet HQ gets into position and can now launch artillery strikes on the Americans.As the Soviets, I could have gone one of two ways at this point: I could have chosen to either directly assault the Americans on the hill to the north or try to outmaneuver them and grab the West German cities. Knowing how effective the Soviets can be when played aggressively, I chose to go for the direct assault on the hill where the Americans sat.

The Soviet commander orders artillery to launch a smoke screen to the north on the town of Lansamen and decides to move his forces there to set up a staging ground for an assault on the hill. Thick smoke blocks LOS to the 6 hexes surrounding the town. 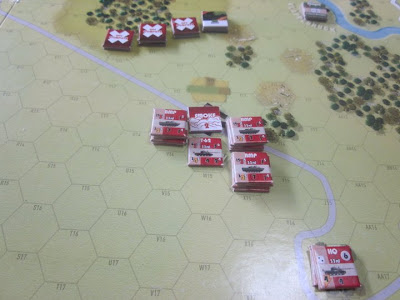 The Soviet commander calls for artillery on the hill to the north. It hits the American infantry and reduces it to half strength. The rest of the Soviets scramble to the smoke screen and form up. Note how my slow HQ tanks are stuck well behind my own forces, which will almost certainly cause some command problems later. 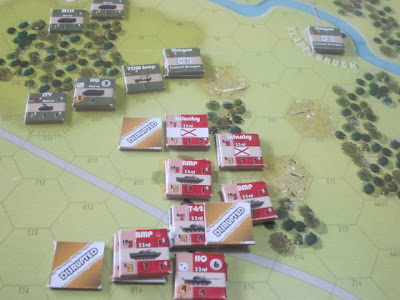 Only the American ITV and the Abrams unit (under the US HQ) can fire into the smoke screen. The fire is disruptive to the Soviet units but not deadly. The Soviet infantry advances through the smoke and towards the US defensive line. 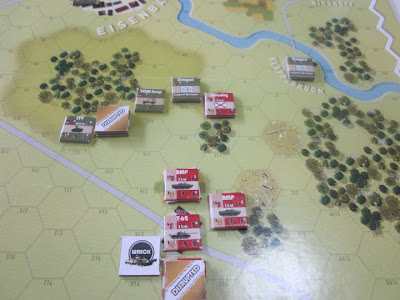 The smoke dissipates and the American commander pours on the fire, destroying the Soviet left flank (2 BMP platoons filled with infantry). Two Soviet infantry platoons (stacked together) make their way to the hill. The Soviet BMPs, no slouches either, pour fire on the American HQ on the hillside, disrupting their command but unable to destroy it. 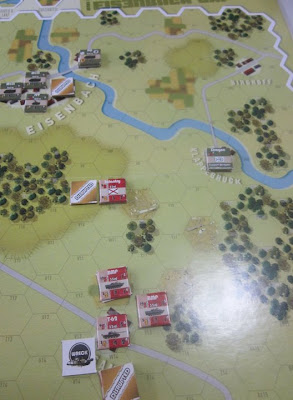 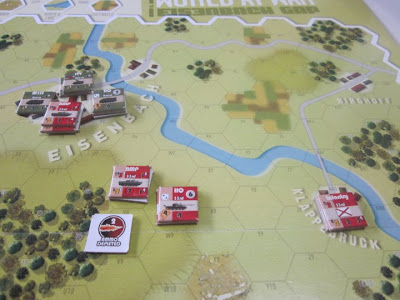 The Soviets enter Eisenbach! Two Soviet BMP platoons enter the city, inflicting heavy losses and destroying the American TOW Jeep platoon. Meanwhile, the Russian infantry assaults Klappenbruck and takes the city. It could go either way at this point
Here’s where the Soviet commander pays dearly for splitting up his infantry and mechanized forces. The American HQ with the Abrams platoon takes out the BMPs trying to storm Eisenbach. The Soviet infantry moves north and takes Birghoff but it is too far to make an assault on Eisenbach before American forces are reinforced. The BMP on the hill south of Eisenbach makes a last desperate bid to destroy the American HQ but it misses completely and runs out of ammunition. The Soviet assault, so close to success, stalls and the Americans hold the sector for another day.
A couple of things the Soviets could have done to make the difference: We could have focused our fire on the units surrounding the HQ rather than on the Abrams. Those tanks can take a beating and they absorbed a lot of Soviet fire. It was a nice gamble, however, and if the Soviets had killed the US HQ, the Americans would have almost certainly lost the game.
Splitting forces up when you’ve only got one HQ is always a bad idea. The Russians have to stay together, keep all the units in command and move as a team. That’s hard to do when your commander is sitting in an old rusted heap of junk T-62 that moves only slightly faster than infantry on foot.