This is the last turn of the game and things are going fairly well for the Americans.  The Libyans start off with attacks by the submarines on the US carrier task force.  One of the subs sinks the destroyer, USS Cushing.  The Americans, however, focus their surface fleet on ASW and manage to destroy the two remaining Libyan submarines.  Afterwards, USS Drum finishes off the rest of the Libyan flotilla of fast missile boats.

The Libyans put up their remaining MiG-23s on CAP over Benghazi and, as expected, the Americans send out F-18s and EA-6 flight to bomb the city.  The MiGs manage to shoot down a Prowler before being taken out by F-18s.  SAMs destroy an F-18 over Benghazi.  A squadron of A-6s hit Darnah.  Bomb damage is assessed as “barely effective” as both flights miss most of their targets.

The United States loses three points for the Libyans sinking their two ships but gains 15 points for hitting all three cities with some effectiveness.  It’s not an overwhelming win but it’s clear to the rest of the world that the United States has effectively punished the Libyans for their role in the sinking of American ships in the Mediterranean.

This was an interesting game!  I really believed the Libyans had no chance at winning by the second day but the surprise sinking of two US ships kept things very tense.  Also, the US had a lot of luck with its defense rolls when intercepting SSMs and Libyan air missions.  Even when the Libyans crept around the CAP, they were never successful in their bombing runs on the US and usually lost some aircraft before limping back to base.  Having said that, the US definitely lost more aircraft than I had anticipated on its bombing runs.  Heavy AAA and SAMs prevented accurate targeting on the second day.  The Libyans always seemed to get some form of revenge on the US whenever they attempted something big. 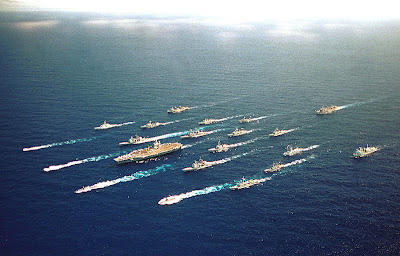 I played this game solo, switching sides and playing each to the best of my ability.  When I was playing the part of the Americans, I felt like a giant trying to do something important while at the same time being attacked by dozens of bees.  As the Libyan, I felt hopelessly under powered and desperate to just survive and lash out in any way possible.  People play wargames for the same reason as they watch movies or read books – it’s to try and get a small taste of the decisions and thoughts that people in other situations experience.  This scenario definitely did that for me and I can’t wait to try the next one out.