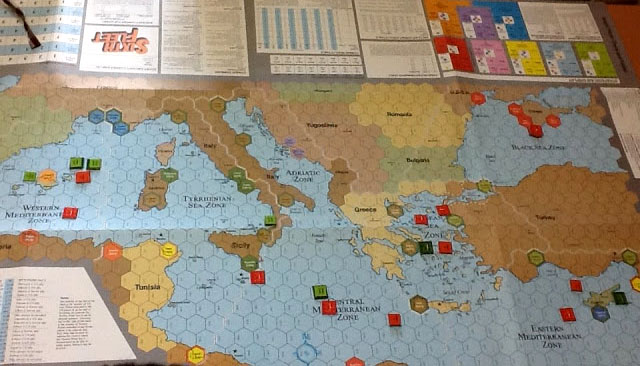 I reviewed the Sixth Fleet game recently and now I’d like to post a report of a solo play of the game.  I hope you’ll see the appeal of the game system from reading about how it went.  In this intermediate scenario, the Soviets have invaded the island of Lemnos near Greece and the US must get its forces, consisting of two task forces, into the Aegean Sea.

The Soviets are trying to stop the Americans from entering the Aegean and getting involved in the conflict.  The Russians have two task forces and a bunch of submarines with which to do this.  The entire game lasts 10 turns, which is about 3 days.

Day 1:
US satellite came online in the morning and helped track a Soviet task force in the far east and a Soviet sub in the Western Med. On paper, the US Navy should have steamrolled into the Aegean (its final objective) but bad luck and even worse weather really screwed them over.

The US carrier task force launched four full squadrons on a bombing mission versus the Soviet task force. The Soviet carrier’s CAP with a measly group of Yak-38s actually managed to bounce the flights back, causing the bombing run to abort. This happened twice in the same day!

The Soviets managed to sink the USS Thach and the USS Stark as they tried to enter the Aegean Sea.

They also managed to launch a successful Tu-16 bombing raid against the American carrier force, sinking the USS Degrasse.

The Sixth Fleet was lucky enough to have a squadron of B-52s dispatched by the Pentagon to help out. They arrived in Naval Station Rota but a storm in the eastern Atlantic grounded them. A storm in the Adriatic also forced both the Soviet and US fleet to keep their forces in the Central Med zone. 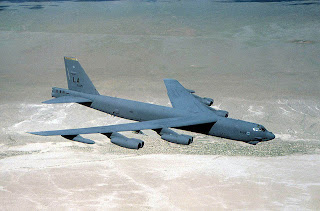 The weather across the Med. settles down a bit. Storms abate in the Atlantic and the Adriatic. The US rejoices as its squadron of B-52s is unleashed. Satellites also come online for the US and pick out three previously undetected subs along with the location of the Soviet carrier task force.

A flight of Tu-16 recon aircraft attempts to find the US task force in the Central Med. but is jumped by American F-16s based in Sicily.

The US carrier task force sends out A6s together with F-18s to hit at the Soviet carrier Minsk and her counterparts. This time they utterly destroy the squadron of Yak-38s on CAP and severely damage two ships in the Soviet task force. The Nimitz steams towards the Aegean and nears the Greek island of Lemnos.

Soviet subs inflict light damage on a second US task force to the west but are largely ineffective. The Russian carrier and cruisers launch SSMs at the US task force but strong air cover and effective anti-air efforts destroy much of the incoming missiles before they land a hit.

Day 3:
Squalls pour across much of the northern part of the Mediterranean. Soviet satellites identify the US carrier task force very close to the island of Lemnos.
Soviet subs attempt to dispatch the carrier escorts but are unsuccessful. The US manages to destroy almost the entire Soviet task force except for the Kirov-class cruiser and the Kulkov. Utterly decimated, the remaining Soviet cruisers launch tactical nuclear weapons at the US carrier task force. The entire group of ships, except for the Nimitz, is destroyed. The Nimitz is heavily damaged.

The B-52s from Rota are dispatched and destroy the Soviet cruisers that fired the nuclear weapons. The entire Soviet surface fleet is now gone.

The US player moves the remaining task force from the Central Mediterranean into the Aegean Sea along with a small group of submarines and the damaged USS Deyo. Despite attempts by Soviet subs to finish off the wounded Nimitz, they are unsuccessful. The US claims a marginal victory.